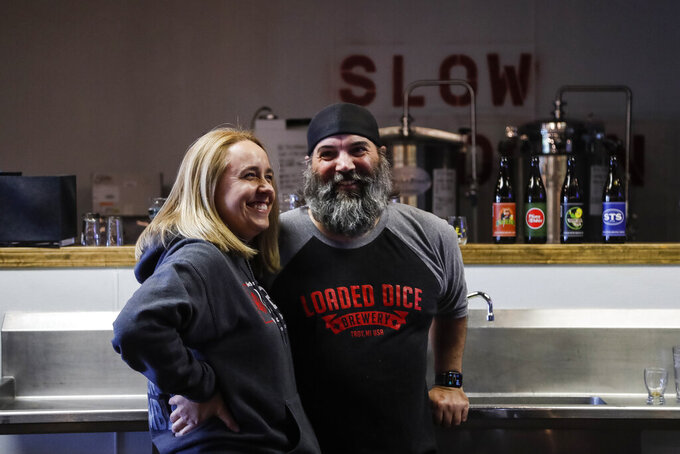 TROY, Mich. (AP) — Jef Smith’s philosophy with beer comes straight from his years in San Francisco, during the late-’90s dot-com bubble when he worked for a startup company as a web developer and designer.

“In the community, there is always this sense of sharing codes, sharing ideas, sharing designs, sharing patterns,” said Smith, who opened Loaded Dice Brewery in September 2020. “When we opened up this brewery, I wanted to kind of present that into the brewery.”

That is plainly evident when you walk into Loaded Dice, sandwiched between storefronts in a tucked-away plaza along Rochester Road in southern Troy. Smith’s two-barrel brewing system is visible from the bar area. Every upcoming beer — whether it’s still brewing, fermenting or carbonating — is listed on the television when you walk in, adjacent to the current tap list. The full recipes of Smith’s beers are written next to his fermenter tanks, and he is more than happy to share them.

There are no secrets here. In fact, you can find Smith’s recipes on a website, parsed down to the exact malts and other ingredients he uses and the exact temperatures he sets to mash and ferment each beer. “I’m more than happy to give (other brewers) any information,” Smith told the Detroit Free Pres s.

“The other thing I do is I really try to promote the beer as it’s being processed,” he continued. “So if I just brew a beer and have kind of a busy night and there’s a couple people here, I’m like, ‘Hey, do you want to try this New England IPA I just brewed here two days ago? But when you come in two weeks from now, it’s going to be completely different.’ I think it’s kind of cool to present them with a raw product, and then they come back in and think, ‘Wow, this changed dramatically.’ ”

During my visit to Loaded Dice, Smith presented me with a taste of a cookies-and-cream imperial stout he was still carbonating called Lays Down A Monster, a reference to a Teddy KGB line in the film “Rounders.” It comes in at a whopping 15% alcohol by volume and maintains heavy chocolate and cookie notes with some creaminess and booziness. It was not a completed product without the carbonation, but it was a palatable preview of what’s to come when he taps it for the public.

“I just like giving people this behind-the-scenes look,” Smith said.

So how did Smith end up here, going from working down the road from Silicon Valley to opening an “open-source” brewery in metro Detroit?

He’s born and raised in St. Clair Shores, and grew up in a family that loved to play games and dabble in some gambling, whether it be horse racing, poker or even bowling. And when he moved to California, he continued that love for games — and really got started with beer.

“The guys I worked with were about three things: playing poker, brewing beer and making BBQ,” he said. “All things I was really interested in.”

Smith and his coworkers purchased an “elaborate brewing structure” and started brewing 10-gallon batches of beer, which they would serve at tastings and parties. His wife, Jennifer, a Sterling Heights native, joined him in California. They eventually had three children and moved back to Michigan.

That’s when the idea of opening his own brewery really took hold. In gambling terms, it meant going “all in.”

“It was either this or competitive BBQ,” Smith said, with a laugh.

Smith began raising capital through the help of a Kickstarter, sharing his vision of an open-source brewery for anyone who would listen, with interested investors promising to match. He worked with Jennifer, a marketer, on branding the brewery concept, paying tribute to his family’s gambling roots. And though the COVID-19 pandemic delayed the opening of Loaded Dice by several months, Smith eventually opened in September 2020, starting with selling cans and later opening the taproom with eight beers on tap, and an outdoor seating area with limited capacity.

“The first night, we went through 11 kegs, when we expected to go through five to seven,” Smith recalled.

And Smith did all this while maintaining a 9-to-5 job which he still currently has working for Tyler Technologies as a user experience designer, creating public safety software for local municipalities, police officers, fire crews, dispatchers and more — “I feel like I’m actually saving lives,” he said.

Because of the pandemic, Smith is working remotely for Tyler inside the brewery space, which allows him to simultaneously get his work done for Tyler while also brewing beer several days a week.

“If it wasn’t for me able to do the job and the brewery at the same time, I wouldn’t be able to spin this up,” he said.

The thing about Loaded Dice is this: The tap list turns over regularly. You don’t know what to expect each time you walk in. Smith has a goal of brewing 100 unique beers in his first year, and he’s very close to reaching that.

“I don’t want to be the place you go where you have the same IPA every time,” Smith said.

That doesn’t mean the beers aren’t dependable. One of the most unique concoctions during my visit was The Birth Of The Fat King, 6.7% ABV, a Weizenbock with notes of peanut butter, banana and bacon smokiness, meant to mimic Elvis Presley’s favorite sandwich. All three flavors balanced each other well and it wasn’t too sweet for a full glass.

Smith also routinely brews for his customers. In June, he collaborated with a lesbian couple, who started as regulars at Loaded Dice but now work as servers, to brew a Pride Month milkshake IPA called Rainbow Jackpot, 7.4% ABV, brewed with Fruity Pebbles, mixed berries and Strata hops. And though he’s not a fan of hard seltzers, he will brew them, specifically for folks with gluten allergies and those who have helped him open the brewery and supported him over the years.

It’s all part of a community vibe that keeps beer enthusiasts across the region coming back despite the plethora of brewery options across metro Detroit.

“Jef brings this type of positive energy that will make you have FOMO (fear of missing out),” said Kristen Thomas, a 38-year-old Sterling Heights native who, along with her husband, has become a weekly visitor at Loaded Dice. “The events, the new beers being released -- it’s an overall fantastic positive vibe.”

Thomas said she loves that “no two beers are the same” at Loaded Dice, and that weekly events, including a cornhole tournament every Thursday, keep customers coming back. There are rotating food trucks each night for those who get hungry.

It’s not about competing with other area breweries — the community of brewers in metro Detroit is “pretty tight,” Smith pointed out, and he knows that if the brewery down the street is doing great, his brewery will, too. As evidenced by Smith’s love for sharing beer recipes and inviting customers into the brewing process, Loaded Dice is all about community.

“We wanted to have that dive-bar, neighborhood, community feel,” Smith said, “and I think we are accomplishing that.”