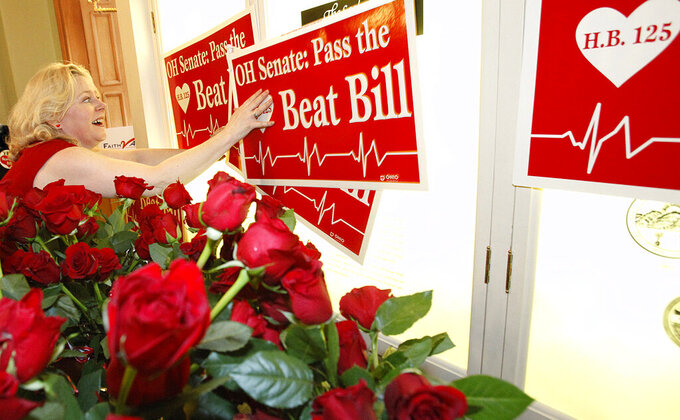 Brooke LaValley, ASSOCIATED PRESS
FILE - In this Feb. 14, 2012, file photo, Janet Folger Porter posts signs during a news conference at the Ohio Statehouse in Columbus, Ohio. An Ohio law banning most abortions once a "fetal heartbeat" is detected took effect suddenly on Friday, the same day the U.S. Supreme Court overturned the Roe v. Wade decision that had made the procedure legal since 1973. The speed of the decision surprised even the law's supporters, and left women seeking abortions — and the clinics scheduled to provide them — scrambling. (Brooke LaValley/The Columbus Dispatch via AP, File)

COLUMBUS, Ohio (AP) — Laws banning most abortions at the point of the “first detectable heartbeat” are beginning to take effect across the country, following the U.S. Supreme Court's decision Friday to overturn the Roe v. Wade decision that legalized the procedure in 1973.

Such laws, often referred to as “fetal heartbeat bills,” ban abortions once cardiac activity is detected, which can happen around six weeks into pregnancy, although a timeframe typically isn't specified in the measures.

Swift court actions in states including Ohio, South Carolina and Tennessee revived laws stalled under Roe in the decision's wake. That has left some people who were planning abortions — and the clinics lined up to provide them — scrambling.

Here's a look at what has happened following the ruling, where that leaves residents of affected states, and what may come next:

WHERE ARE THE LAWS IN EFFECT?

Stalled laws were reimposed in Ohio, South Carolina and Tennessee within days of the Supreme Court ruling. In September, Texas became the first state to successfully impose such a law, with the dozen or so other states seeing theirs placed on hold under Roe. Similar laws are the subject of court action in at least four other states.

Ohio was able to reimpose its “fetal heartbeat” law, which had twice been vetoed because of constitutional considerations under Roe, within hours of that case's reversal. At the request of Republican Attorney General Dave Yost, a federal judge lifted the stay that had prevented enforcement since the law was signed in 2019. The American Civil Liberties Union and Planned Parenthood sued in the Ohio Supreme Court on behalf of a group of abortion providers Wednesday, arguing the law also violates the state constitution.

South Carolina's “heartbeat” law went into effect Monday, after an injunction blocking the law was removed. Tennessee's took effect Wednesday. In Georgia, where a federal judge declared the “heartbeat restriction" unconstitutional in 2020, a federal appeals court Friday has given parties three weeks to file briefs addressing the effect the Supreme Court ruling on the state's appeal of the lower court ruling.

Q: IS ABORTION STILL LEGAL IN THESE STATES?

A: Yes, but only until cardiac activity is detected. That can happen around six weeks of gestational age, which is before many women even know they are pregnant.

Further, abortion rights groups, clinics and some faith groups are making available resources to people who still want abortions, including financial help and transportation to other states.

Meanwhile, abortion opponents, including Ohio's governor, are ramping up resources for families, in hopes that the new restrictions prompt more people to carry their pregnancies to term. Republican legislative leaders in Ohio and South Carolina have raised the possibility of further tightening their states' abortion restrictions to full bans later this year.

Tennessee's other abortion ban, known as the so-called trigger ban, is set to restrict abortion in that state almost entirely in less than a month.

WHAT DO THE LAWS PROHIBIT, EXACTLY?

The laws generally prohibit abortions of “an unborn human individual whose fetal heartbeat has been detected.” That terminology — used widely in anti-abortion legislation across the country — does not easily translate to medical science.

That’s because at the point where advanced technology can detect that first visual flutter, as early as six weeks into pregnancy, the embryo isn’t yet a fetus, and it doesn’t have a heart. An embryo is termed a fetus eight weeks after fertilization, according to medical experts.

Abortion rights advocates, civil rights attorneys and some abortion foes favor calling the laws “six-week abortion bans.” That, too, is misleading. Most “heartbeat” laws make no mention of a particular gestational age after which abortion is illegal.

What they ban are most abortions after the point when a state-sanctioned detection method administered in good faith by a medical professional can detect cardiac activity.

If no cardiac activity is found, an abortion can go forward. Under Ohio's law, women must wait 24 hours, then get a second ultrasound to again assure no flutter is present before the procedure can move forward.

ARE THERE ANY EXCEPTIONS?

Yes, but it depends on the state. The Ohio and Tennessee laws make exceptions for the life of the mother or for risk of "substantial and irreversible impairment of a major bodily function.” This could include preeclampsia, diabetes, multiple sclerosis, premature rupture of membranes or inevitable miscarriage. Neither makes exceptions for incest or rape, including rape of a child. Both laws also specify that a woman’s mental health does not qualify for an exemption.

South Carolina's law requires an attempt to detect a “fetal heartbeat” once a doctor thinks a pregnant woman is at least eight weeks along. The state allows exceptions for when the woman’s life is in danger, or if the pregnancy is the result of rape or incest.

Georgia’s law makes exceptions in the case of rape and incest, if the woman files a police report first. It also allows for abortions when the life of the mother is at risk or when a pregnancy is deemed “medically futile," generally due to a serious medical condition in the fetus.

WHAT ARE THE PENALTIES FOR VIOLATORS?

A person who performs an abortion in violation of the ban in Ohio could be charged with a fifth-degree felony, which carries a penalty of probation or six to 12 months in prison and a fine of up to $2,500.

Under the law, a doctor invoking one of the law's exceptions also must specify in writing the medical condition invoked, place a record of that decision in the patient's file and maintain it for seven years. Failing to keep proper paperwork is subject to a penalty of up to $20,000 for each instance.

Under Tennessee's law, performing an abortion when cardiac activity is present is a felony, subjecting doctors to up to 15 years in prison. A doctor guilty of violating South Carolina's abortion law faces a felony conviction carrying a penalty of $20,000 and up to two years in prison, or both.

Pregnant people are not held liable under any of the laws, and they are given the option to bring civil action for wrongful death if their pregnancy is terminated without an attempt to detect a “fetal heartbeat.”