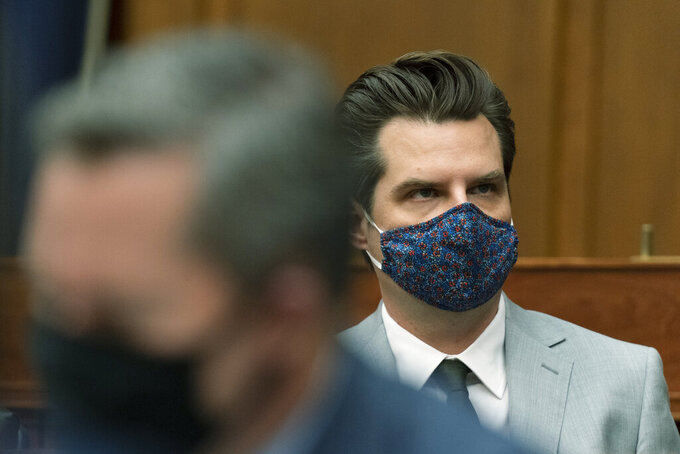 ORLANDO, Fla. (AP) — It all started with a hunch by a central Florida prep school teacher about who had launched a politically motivated smear campaign against him, falsely alleging he was racist and in a sexual relationship with a high school student.

Investigators say fingerprints on an envelope used in the smear campaign against Brian Beute led them to a local tax collector, Joel Greenberg. That investigation subsequently led to Greenberg's friend, U.S. Rep. Matt Gaetz, who is now the subject of a probe into whether the congressman and tax collector paid women or offered them gifts in exchange for sex and whether one of them was underage.

Gaetz has denied the allegations and insists he will not resign his seat in Congress. Greenberg has pleaded not guilty to 33 charges, though his attorney and prosecutors said last week they are working toward a plea deal. “He's uniquely situated,” said Fritz Scheller, Greenberg's attorney.

The friendship between the congressman and the tax collector was one built on undying support for former President Donald Trump, selfies outside the White House, interest in cryptocurrency and a talent for shocking critics with their outrageous actions. Both were scions of wealthy Florida families.

Even before his arrest, Greenberg, 36, was a lightning rod for controversy.

With no previous political experience, Greenberg was elected Seminole County's tax collector in 2016, promising to be a breath of fresh air against an incumbent who had been in office for almost three decades.

Months after taking office in 2017, he started allowing employees to carry guns openly, even though then-Attorney General Pam Bondi's office would say later in an informal, nonbinding opinion that they shouldn't openly carry firearms in their jobs since they aren't law enforcement officers.

In late 2017, wearing cargo shorts and a ballistic-style law enforcement vest, Greenberg pulled over a driver for speeding while wearing a tax collector badge that resembled a police shield. Local prosecutors declined to file charges of impersonating an officer. Not long after that, Greenberg was pulled over for speeding and asked not to be issued a ticket out of “professional courtesy.” The officer declined.

In 2018, Greenberg was widely criticized for making an anti-Muslim tweet.

An audit released last year said Greenberg wasted more than $1 million on questionable contracts and spent more than $380,000 on purchases of body armor, weapons, ammunition and a drone. Greenberg paid $15,000 to install sprinklers outside a branch office that could be remotely operated to aim at people gathered outside, though Greenberg claimed the sprinkler system was old and needed to be replaced, according to the audit.

In 2019, Greenberg set up a company, at a cost of $65,000, that would allow taxpayers to pay their bills with cryptocurrency. No payments were ever processed through the company. About $90,000 in public funds was used to install server equipment in a room in Greenberg's private office that only the tax collector and a vendor had keypad access to, the audit said.

The equipment was moved last year to a branch office where it caused a power surge, creating a fire that resulted in $6,700 in damage that wasn't covered by insurance, the audit said.

Greenberg's legal problems began last summer when he was arrested on charges of stalking Beute, who had publicly criticized Greenberg's behavior and said he planned to run against the tax collector. Greenberg mailed fake letters to Beute’s school signed by a nonexistent “very concerned student” who alleged the opponent had engaged in sexual misconduct with another student, according to an indictment from last June.

The former tax collector also used his opponent’s name and photo to create a fake Twitter account on which he posted statements in favor of white supremacy and created a fake Facebook account in which he posed as a “very concerned teacher” who repeated the allegation about sexual misconduct with the student, the indictment said.

Beute told detectives he believed possible suspects could be Greenberg, Republican lobbyist Chris Dorworth or conservative political blogger Jacob Engels, who has ties to Roger Stone. Beute had led a citizens group that defeated a controversial proposed housing development in a rural area that had been championed by Dorworth.

Earlier this month, Dorworth resigned from the Tallahassee lobbying firm led by Republican Party fundraiser Brian Ballard. He had been working there since losing a Florida House race in 2012.

Fingerprint results on an envelopes containing the fake letters about Beute led to Greenberg. In August, Greenberg was charged with more serious crimes. An indictment alleged that Greenberg gained personal information from motor vehicle records to engage in commercial sex acts and accessed personal information to engage in “sugar daddy” relationships, including with someone who was between the ages of 14 and 18.

Shortly after his initial arrest, Greenberg diverted more than $400,000 in public money from the tax collector's office into a private bank account and into a business he set up to buy and sell cryptocurrencies, according to new charges filed several weeks ago.

Investigators have been examining Gaetz’s ties to other Florida political figures, including Dorworth; Halsey Beshears, the state’s former top business regulator; and Jason Pirozzolo, a hand surgeon and Gaetz campaign donor who served on the board of the Orlando Airport Authority.

One person familiar with the federal probe has said investigators are looking at trips Gaetz and other men took and whether women were paid or received gifts to have sex with them or later received government jobs.

Most troubling for Gaetz is the fact that prosecutors and Greenberg's attorney told a judge last week that they expect him to accept a plea deal.

“I am sure Matt Gaetz is not feeling very comfortable today,” said Scheller, Greenberg's attorney.

“Are you the big fish? Are you going to take us to someone bigger than you?” Weinstein said.