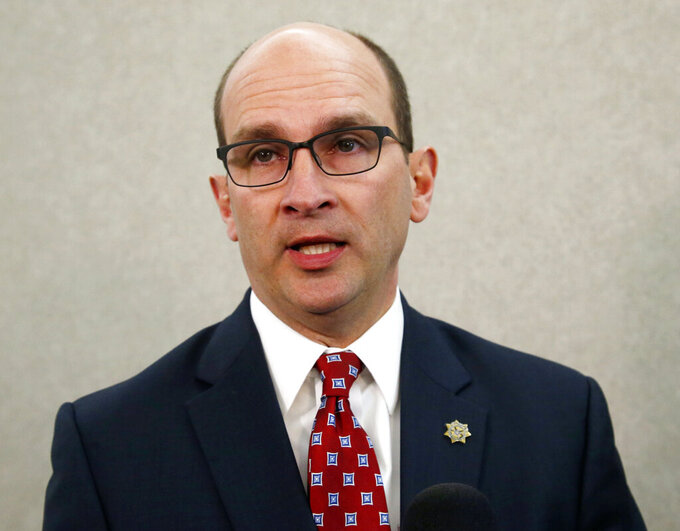 Sue Ogrocki, ASSOCIATED PRESS
FILE - In this Friday, Dec. 15, 2017, file photo, Cleveland County District Attorney Greg Mashburn talks with the media in Norman, Okla. District Attorney Mashburn says he will not pursue criminal charges against the University of Oklahoma's former top lobbyist who resigned after a woman alleged he assaulted her. Mashburn said Tuesday, Sept. 28, 2021, after reviewing the woman's allegations against John Woods, he determined the facts did not support a criminal charge. (AP Photo/Sue Ogrocki, File)

Mashburn said he determined the facts did not support a criminal charge against John Woods, 46.

“This is a deal where he made two advances to her, and she successfully rejected those advances," Mashburn said. “It does not rise to the level of a criminal prosecution."

Mashburn said both advances involved Woods trying to kiss the woman in the parking lot of a bar where the two had met.

“It’s the decision that we expected," Stice said. “My client was prepared to defend against the victim protective order and if criminal charges were filed.

“He’s appreciative of the investigation and wants to move on from here."

In her request for a protective order, the woman claimed Woods “sexually assaulted" her in a parking lot on July 27 and later sent her a sexually explicit video of himself. The woman also claimed Woods continued to harass her by sending her unwanted text messages. The woman filed her petition for a protective order and reported the incident to police about 11 days after the incident.

The Associated Press does not generally identify victims of sexual misconduct.

Woods worked for three Republican speakers of the Oklahoma House before stints as the president of the Norman Chamber of Commerce and as director of the Oklahoma Tobacco Settlement Endowment Trust. He was named OU’s director of government affairs in 2018 by then-President Jim Gallogly.

The University of Oklahoma was rocked with sexual assault allegations in 2019 against its former President David Boren and one of Boren’s top administrators, Tripp Hall III. Both men denied the allegations, and criminal charges were never filed.

A lawsuit filed against the university by one of Hall’s accusers was settled, but the terms of the settlement were not disclosed.