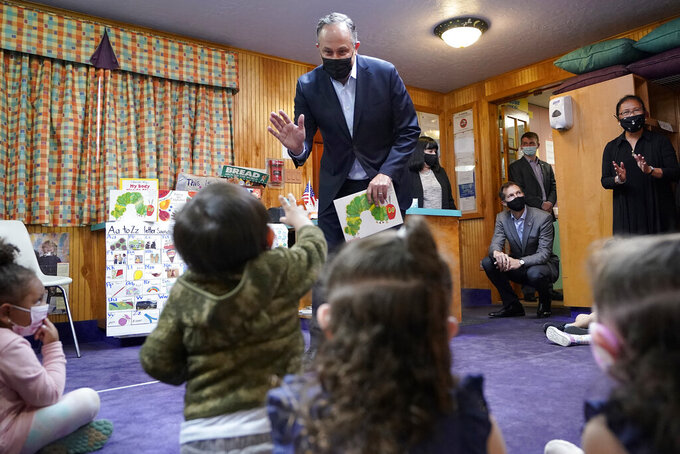 The administration has proposed $225 billion in funding for child care under the American Families Plan, part of the $3.5 trillion Build Back Better Agenda.

Under the proposal, child care costs would be capped at 7% of a family’s income. Massachusetts parents currently pay more than three times that on average.

Emhoff is hearing similar stories from struggling families all over the country, he said at Mother Hubbard Preschool in Milford.

“The stories I’ve heard of working families where one spouse, usually the mother, had to fall out of the workforce to get through COVID — it’s just not right. It’s not fair. And the Build Back Better Agenda is going to rectify that,” he said.

Emhoff and U.S. Rep. Jake Auchincloss met Dorothy Vecchiolla, who founded the school in 1961 when she could not find child care for her own kids, and longtime director Pamelia White.

White said that guaranteeing early childhood education would even the playing field when kids started school.

Today, the school takes in some of the most vulnerable children in the Milford area, and provides not just an education, but proper nutrition, White said.

Emhoff also read “The Very Hungry Caterpillar” to a group of about a dozen 3-to-4-year-olds.

The book, Emhoff said, was a staple for his own kids.