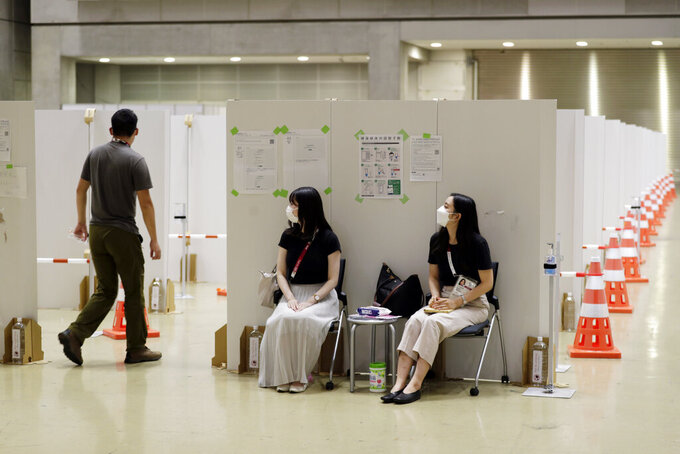 Hiro Komae, ASSOCIATED PRESS
Workers, center, help direct a man into a booth for a coronavirus infection test at the Main Press Center for the 2020 Summer Olympics, Thursday, July 29, 2021, in Tokyo, Japan. About 30,000 people from scores of nations are spitting into tiny plastic vials every day at the Olympics in a routine that’s grown crucial in going ahead with the pandemic-era Games, according to organizers. (AP Photo/Hiro Komae)

About 30,000 people from scores of nations are spitting into tiny plastic vials at the Olympics in a daily routine that’s grown crucial in going ahead with the pandemic-era Games, according to organizers.

If you do the math for the two-week duration of the Olympics, that adds up to a half million saliva samples collected for athletes, who get tested daily, as well as other venues, in an extraordinary effort to curb the spread of COVID-19 infections. At about 1 milliliter per sample, that would be ... well, a lot of spit.

In contrast, such tests have long been hard to find for the general Japanese public. Japan is unique among developed nations in having discouraged widespread testing for the coronavirus.

The thousands of samples of collected spit are stored in tubes and identified by a barcode then all go through preliminary tests. Those with dubious results go through another round of testing, according to Olympic organizers’ "Playbook,” which outlines anti-COVID-19 measures.

The tests are being done at a facility called the Fever Clinic, which also cares for and isolates infected people within the so-called "Olympic bubble.” Once a COVID-19 infection is identified or suspected, “close contacts” also are tested to identify others who may be ill — a whack-a-mole process done under controlled conditions. Organizers wouldn't comment on the number of people working at the clinic or the specific arrangements.

These tests don’t require sticking a swab up one’s nose, another widespread method of testing for the coronavirus.

The tests for athletes, team officials, media and others affiliated with the Games are free to those submitting them, although they are estimated to cost about 10,000 yen ($100) each, medical say experts. Tests for members of the Japanese public generally cost about that much, sometimes more.

Some medical experts have expressed worries about the Olympics turning into a “super-spreader” event. Daily coronavirus cases surged in Tokyo to a record, topping 3,000 people this week.

Takanori Teshima, professor at Hokkaido University, who helped develop the tests used in Japan, including those at airports, says the constant and careful testing of Olympians means the risks lie mostly in the general public making the athletes sick, not the other way around.

“As you know, not all people are going to listen and stay isolated. And so doing tests upon tests is the best way,” he said. “But this is possible only because it’s the Olympics. It’s unrealistic to think this method can continue as a routine.”

Shosuke Takeuchi, a doctor and director of Take Clinic Shimbashi, one of Tokyo's biggest coronavirus testing locations, acknowledged voluntary testing can be limited in stopping the sickness from spreading because people whose living habits make them the most contagious are precisely the kind of people who won't seek testing.

The avid testing at the Olympics has led to shortages and some national teams recently complained their testing kits hadn’t arrived. Organizers scrambled to provide additional kits.

So far, 23 athletes, as well as others working at the Games, including Japanese residents, such as security officials, have tested positive, totaling 225 people overall, as of Friday. But the rate for testing positive at the Olympics has still been relatively low, at 0.02% for July, because more than 340,000 tests have been carried out so far, according to the Tokyo organizers.

And the places where COVID-19 appear to be spreading the most are the crowded streets of Tokyo, not the zealously tested Olympic venues, Teshima and other medial experts say.

Masaharu Isobe, professor at the Laboratory of Molecular and Cellular Biology at the University of Toyama, who has developed a speedy COVID antigen test, says regular testing may eventually become more common for everyone.

“The point is to locate infected people as soon as possible and prevent them from spreading it around everywhere,” he said.

Still, reflecting widespread opinion, Masaru Kaneko, an economist and honorary professor at Keio University, says it’s unfair such tests are being given by the day to Olympians but remain hard to get for regular people.

Japanese Olympians and staff have also been given priority in getting vaccinated, while the rollout for regular people has lagged, at about a fourth of the population fully vaccinated so far, Kaneko said on his Twitter account.

“Equality as far as the right to life is not guaranteed in Japan,” he said.

Testing someone every day is a troublesome and costly effort, and, at the Olympics, it's a special government-backed endeavor, Teshima said.

“It is a big contradiction,” he said. “Why just the athletes?”