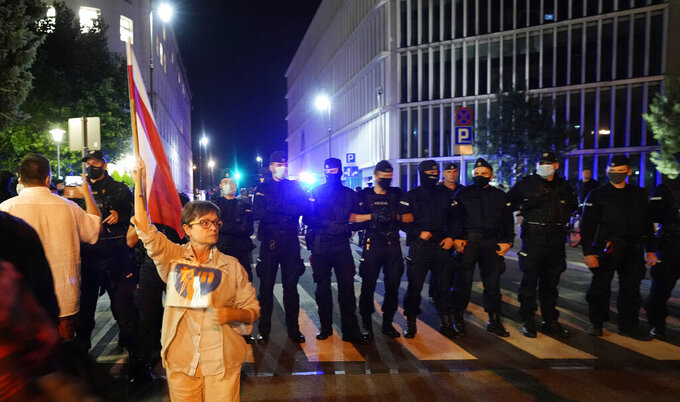 Czarek Sokolowski, ASSOCIATED PRESS
People protest outside the Polish parliament after lawmakers passed a bill seen as harmful to media freedom in Warsaw, Poland, Wednesday, Aug. 11, 2021. Poland's parliament voted Wednesday in favor of a bill that would force Discovery Inc., the U.S. owner of Poland's largest private television network, to sell its Polish holdings and is widely viewed as an attack on media independence in Poland. (AP Photo/Czarek Sokolowski)

WARSAW, Poland (AP) — Poland is looking at a more difficult relationship with two allies, the United States and Israel, after lawmakers approved separate bills — on foreign ownership of media and affecting the property rights of Holocaust survivors' families — which the Polish government had been warned to drop.

The European Union also slammed the media bill on Thursday as undermining media freedom, adding to pre-existing strains between Warsaw and Brussels from the EU's perception of democratic backsliding in member nation Poland.

The bills passed the lower house of the Polish parliament on Wednesday, and still require approval of the president, who supports the right-wing party that has governed the country since 2015.

The two proposals threaten to further isolate Poland, whose geographic position in Central Europe has often left it at the mercy of stronger neighbors. Poland's membership of the EU and NATO and its relationship with the U.S. are considered key guarantees of the country's security.

One of the bills that passed would push Discovery Inc., the U.S. owner of Poland’s largest private television network, to sell its large and popular Polish network, TVN. It follows the state broadcasting authority's ongoing refusal to renew the license for TVN's all-news station TVN24, which expires in September.

Discovery accused Poland of violating a U.S.-Polish investment treaty, and said it notified the Polish government on Thursday that it was initiating legal action at an international arbitration court over the “discriminatory campaign."

“We are deeply committed to safeguarding our investment in Poland and its people, defending the public’s interest in independent media and the rights of freedom of expression,” said Jean-Briac Perrette, the president of Discovery International, adding that “we will aggressively defend our rights.”

The other bill in an administrative amendment which would result in former owners, including Holocaust survivors and their descendants, from regaining property expropriated by the country’s communist regime.

U.S. Secretary of State Antony Blinken issued a statement late Wednesday about what he called the “troubling legislation."

“These pieces of legislation run counter to the principles and values for which modern, democratic nations stand,” Blinken said.

Prime Minister Mateusz Morawiecki responded Thursday by suggesting the U.S. officials do not understand the Polish bills and should analyze them more closely.

On the media bill, Morawiecki said: “We do not have any intentions regarding a specific television channel. It is just about tightening the regulations so that there is no situation in which companies from outside the European Union would freely buy media in Poland.”

The media bill triggered nationwide protests Tuesday. Among the participants expressing fear that their right to independent information was under attack were older Poles who remember the censorship of the communist era.

By contrast, the law which would affect the former property owners — both Jewish and non-Jewish — got almost no media coverage in Poland. But it sparked a fast and angry response from Israel, with Foreign Minister Yair Lapid saying it “damages both the memory of the Holocaust and the rights of its victims.”

The EU Commission said it will follow the media issue very closely while the head of the EU's top watchdog for democratic values, Vera Jourova, tweeted that the foreign ownership bill sends a negative signal.

“Media pluralism and diversity of opinions are what strong democracies welcome, not fight against," Jourova wrote. “We need a #MediaFreedomAct in the whole EU to uphold media freedom and support the rule of law.”

European Parliament President David Sassoli also weighed in on the media vote, calling it “very worrying” and said if it comes into force, “it will seriously threaten independent television in the country.”

Michael Roth, a German government member in charge of European affairs, said “democracy and the rule of law need critical and free media like the air to breathe. Laws should protect a colorful, diverse media landscape and not restrict it — and that everywhere in the EU.”

The development looked to many like a crucial move in a step-by-step dismantling of the democratic standards that Poland embraced when it threw off communism in 1989.

Hungary had already set the trail for such an illiberal political direction, and the EU has shown little ability so far to do much to ensure adherence to its values either there or in Poland, both previously models of democratic transformation.

After communism ended more than three decades ago, many foreign investors entered Poland's media market. Poland's ruling party, led by the country's de facto leader, Jaroslaw Kaczynski, has long seen this as a problem and sought to “repolonize” the media. The party argues that keeping Polish entities in control of the media is a matter of national security and that such regulations are in line with Western European standards.

However, the party's critics see the efforts to nationalize media as a pretext for silencing independent voices. The effort is well on its way. Soon after winning power in 2015, Law and Justice transformed tax-funded public media into a party mouthpiece. Last year the state oil company bought a large German-owned private media group and has since moved to change the editors.

Raf Casert in Brussels and Kirsten Grieshaber in Berlin contributed.