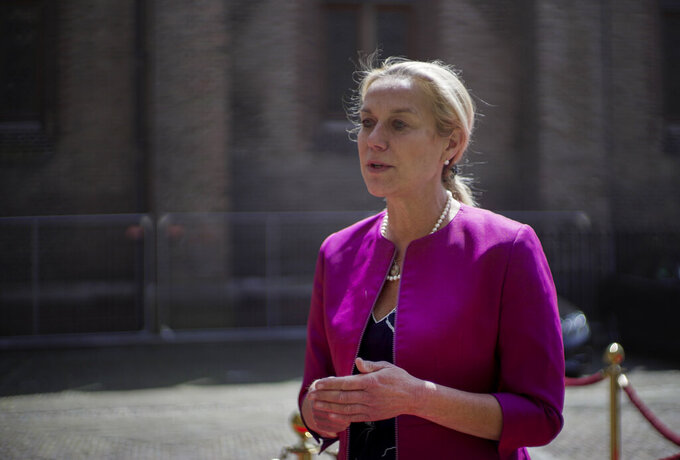 Peter Dejong, ASSOCIATED PRESS
FILE - In this Friday, May 28, 2021 file photo, caretaker Foreign Minister Sigrid Kaag answers questions from the media in The Hague, Netherlands. Dutch Foreign Affairs Minister Sigrid Kaag resigned Thursday Sept. 16, 2021, after a majority of lawmakers in the lower house of the Dutch parliament supported a motion of censure against the government over its handling of evacuations from Afghanistan in the aftermath of the Taliban’s takeover. (AP Photo/Peter Dejong, File)

THE HAGUE, Netherlands (AP) — The Dutch defense minister quit Friday, a day after parliament passed a motion of censure against her for her handling of chaotic evacuations from Kabul of translators who worked for Dutch forces in Afghanistan.

Ank Bijleveld is the second minister in the Netherlands' caretaker coalition government to resign over the evacuations, following the foreign minister, Sigrid Kaag.

Kaag stepped down immediately after the parliamentary censure motion was passed Thursday night. Bijleveld initially said she would remain in office but quit Friday afternoon amid political debate over why she refused to follow Kaag's example.

In a brief press statement Friday announcing her resignation, Bijleveld explained why she initially chose to stay in office.

“I wanted to continue to complete the task that I stand for," she said. "For the men and women who are on the front lines and to complete the job of bringing to safety the translators who are still in Afghanistan and who are counting on us.”

But she added that, "I see that my decision to remain in office has become the subject of discussion. As a result, I can no longer adequately take responsibility for my people.”

Bijleveld is a senior member of the Christian Democrats party that is currently in drawn-out talks to form the next Dutch ruling coalition following a general election in March.

Caretaker Prime Minister Mark Rutte, leader of the conservative People’s Party for Freedom and Democracy that won the most seats in the election, is in talks with Kaag's centrist D66 party and the Christian Democrats to form a minority coalition after months of talks to cobble together a coalition with a majority in parliament collapsed.