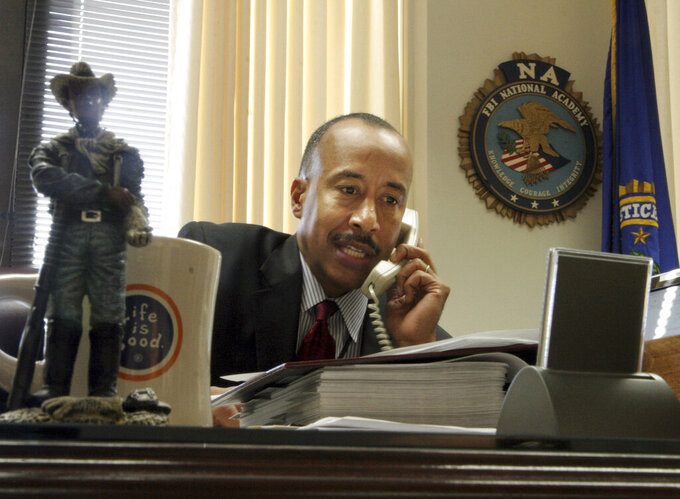 Jahi Chikwendiu, ASSOCIATED PRESS
Michael Mason, the Executive Assistant Director of the FBI, at his office at FBI Headquarters, Dec. 6, 2006, in Washington. Since late April, Mason, due to the shortage of school bus drivers, has been working in his retirement for Chesterfield County Public Schools as a bus driver. While it differs drastically from his previous profession, “I feel the same sense of duty,” he said. (Jahi Chikwendiu/The Washington Post via AP)

RICHMOND, Va. (AP) — Mike Mason was one of the nation’s highest-ranking FBI officials. Now he drives students to school in a yellow school bus each morning and afternoon.

It wasn’t the career turn he’d imagined for himself. He was once the executive assistant director of the bureau, responsible for overseeing all criminal investigations, among other duties. But in his retirement, he felt a pull to help when there was a shortage of school bus drivers.

“For context, probably half of the FBI’s operational resources fell under me,” Mason, 63, said from his home in Midlothian, Va.

Since late April, Mason has been working for Chesterfield County Public Schools as a bus driver. While it differs drastically from his previous profession, “I feel the same sense of duty,” he said.

Each morning at about 5:30 a.m., Mason carefully inspects his 24-foot-long bus — examining the interior and exterior — to ensure that it’s safe for students to ride. “I get it ready to roll,” he said. “This is not hyperbole: I’m smiling every day I start that bus up.”

He collects nine students ages 10 to 18 and drops them off at the Faison Center in Richmond, which offers educational programs for autistic children.

Mason understands the struggle that students, particularly those with disabilities, have faced throughout the coronavirus pandemic. It’s what ultimately spurred him to spring out of his short-lived retirement to drive a school bus.

The idea came to him in January this year, when he saw a local news story about the desperate need for school bus drivers.

Mason learned that the severe shortage has become a crisis in school districts across the country. Given that the average age of school bus drivers is considerably higher than the median age of U.S. workers, many drivers decided to retire when schools pivoted to remote learning, while others didn’t want to risk possible infection by continuing to work when in-person classes resumed.

In the wake of mass shortages, school districts have had little choice but to adopt creative solutions. Massachusetts has deployed the National Guard to fill the void, and Pennsylvania, South Carolina and Ohio could soon follow suit.

To attract prospective drivers, school bus companies have started proposing free training and sign-on bonuses, while numerous districts, including Baltimore City Public Schools, are offering to pay parents to transport their own children to school. In parts of the country, the scarcity is so dire that some students have been stranded without a ride to or from school.

Mason — who retired from the FBI in 2007 and joined Verizon as chief security officer until he retired again in December 2020 — wanted to lend a hand.

He was done with executive work, he decided, but “I was ready to get back into doing something that would give my life a regular cadence.” Plus, as a father of two adult sons, whom he called “the most precious things in the world to me,” Mason said he “always wanted to do something with kids.”

Mason grew up on the South Side of Chicago and was raised by a single father who was a truck driver for the board of education. “That’s part of what makes me smile every morning as I crank this bus up,” he said. “It’s the connection to my father.”

In his youth, Mason bagged groceries, stocked shelves, pumped gas, washed cars and mowed lawns so that he could pay his way through college.

He graduated from Illinois Wesleyan University in 1980, then joined the Marine Corps, where he served for nearly five years before entering the FBI Academy in 1985. It was a long-held dream.

Mason had fantasized about being in the FBI from the time he was in the seventh grade. “I wanted to be part of something that was bigger than me,” he said. “The reality exceeded anything I ever dreamed of. I loved every day of my FBI experience.”

Mason recalls taping a wire to his body countless times and going undercover to bust local drug dealers in Hartford, Conn., where he was based for four years. “To gain somebody’s trust and confidence and be working against them was exciting, exhilarating, and scary at times, too,” he said.

During the 23 years he spent in the FBI, “I went from being a brand-new agent working on a variety of criminal cases, to being a supervisor, and then moving up through the ranks,” he said. “I remain one of the four most senior African Americans in the FBI’s history, and I’m very proud of that.”

In 2003, he became head of the Washington Field Office. Then, as the executive assistant director responsible for criminal investigations, he oversaw 6,500 people in Washington and 56 field offices across the country. He also was responsible for the FBI’s cyber investigations, its fleet of more than 100 aircraft, the elite hostage-rescue team and 59 FBI offices overseas.

In December 2007, Mason felt ready for a change. He joined Verizon in January 2008 to oversee the company’s global security efforts.

“There comes a time in any career where it’s time to turn the page, to do something different,” he said. “The thing I have loved most about all of my careers, including driving a school bus, is that they offer the opportunity to learn something new every day.”

Despite Mason’s impressive résumé, he wasn’t qualified to become a school bus driver right off the bat. It took several weeks of training to get his commercial license.

Mason has been driving students to and from school since the spring, including during the summer. After he completed training, he was asked whether he would be willing to transport kids with special needs. He answered, “Absolutely.”

“It has increased my capacity for empathy exponentially,” Mason said. “What I’ve enjoyed most is making breakthroughs.”

Particularly meaningful moments have included seeing a shy student smile for the first time, or beaming with pride as a child waved at him as he approached the school for pickup at 2:30 p.m. “These kids are just like you and me. They want to self-actualize, they want to be the best they can be,” Mason said.

Still, while driving a school bus has been profoundly rewarding for Mason, it hasn’t come without challenges. Some days are “a cacophony of noise and chaos, and I can’t wait to turn the bus off,” he said. “But I never leave angry. It’s another day, and another chance to try again.”

Mason, who recently received his coronavirus booster shot, said he tries not to worry about the pandemic while driving the bus. He is taking all the necessary precautions to avoid getting infected, he said, and “I am choosing not to live in some hermetically sealed jar.”

More than anything, Mason is focused on the well-being of the students. “When I get in that bus, I have to be on. I have to be paying attention to what I’m doing,” he said. “I want parents to know that I care about their children.”

Although there are few parallels between Mason’s former FBI position and his current job, “I guess the similarity is, I’m doing something I care about,” he said. “Half of loving your work is the attitude you bring to it.”

Regardless of the challenges that come with the job, “this is an experience that I will always remember and treasure,” he said, adding that he is “extremely grateful” to be in a financial position to donate the vast majority of his salary to various organizations close to his heart, including A Call to Men, St. Jude Children’s Research Hospital, and his alma mater, Illinois Wesleyan University.

According to a representative of Chesterfield County Public Schools, starting pay for bus drivers is $20.21 per hour, with bonuses of up to $3,000 this school year, along with other financial incentives.

“As the first and last school representatives that most students see each day, bus drivers have a great deal of influence on our students’ success,” he said. “Mike Mason is an outstanding representative of Chesterfield County school bus drivers, and we are very happy he is on our team.”

“He is a role model for our students, and for all of us, really,” Daugherty continued.

Mason hopes his nonlinear career move will inspire others to recognize that “important work” comes in many forms, and whether you’re an executive of a critical government body or a school bus driver, “we all contribute stones to build the cathedral.”

After all, driving students to and from school, Mason said, is about far more than maneuvering a big yellow bus.

“I’m transporting America’s future,” he said. “What could be more important than that?”