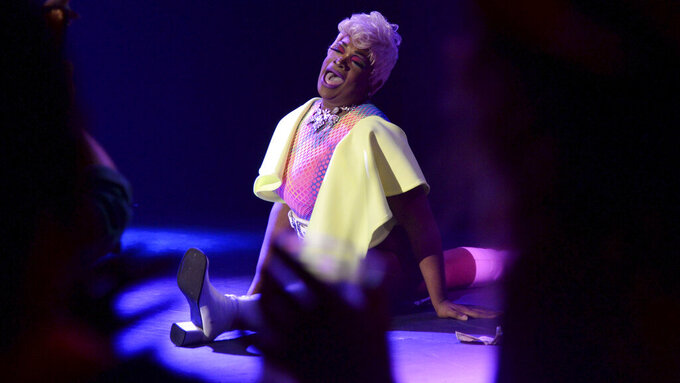 MACON, Ga. (AP) — Before she became one of Macon’s most popular drag queens, the host and show director of The Tribe didn’t want to do drag.

A former downtown club was hosting a Newbie Night, and Yutoya Avaze Leon tried to convince Christina Leon to join her in the competition before they were known as Christina and Yutoya.

Although she didn’t compete in the competition at The Mill, Christina dressed in drag that night, and the bar manager told her she looked pretty and should try performing.

“Once I hit a stage, I was like this is fun and I enjoyed it a lot so I just kept going,” she said.

Christina started performing six years ago, and after a few years of performing in Atlanta and other cities in Georgia as the Leon Sisters, she and Yutoya realized that no one knew about them where they lived in Middle Georgia.

They did a show at a business on Cherry Street, and people raved about their talent and were excited for a new group.

“We were like, ‘We’re not new at all.’ And so, we realized at that moment, though we’re from here and in other cities we’re well known, in our own hometown they have no idea who we are,” Christina said.

Christina, Yutoya, Akasha Giselle Vidalle and DJ B3 founded The Tribe around three years ago and officially started performing under the name two years ago, Christina said.

“Describing a Tribe show is like trying to explain what you’re gonna see in the circus. You can’t. You’re going to come in, you’ll sit down and you’ll enjoy yourself,” Christina said.

To hire the group, people can reach out to them on their website at thetribemacon.com or on their Facebook page at facebook.com/TheTribeMacon.

“We’ve met some amazing people that truly support us and that just pour into us and love on us, and it’s really good to have that because I don’t think we would have made it as far as we did had we not had that support and love from different bar owners and just supporters in general,” Christina said.

Christina and Yutoya met more than seven years ago, and Christina admitted they did not like each other when they first met.

However, they bonded over RuPaul’s Drag Race and became best friends.

Yutoya remembers having a dream as a kid of performing on stage in a wig, so she said performing in drag was a literal dream for her.

“I’ve always been told that being feminine was weak in every regard,” Yutoya said. “Women are strong and powerful, and I wanted to embody that, and that’s what I like about drag… I can go be powerful as Yutoya,” she said.

Once she convinced Christina to do drag, they started performing together as the Leon Sisters.

They met Akasha when they started performing in Macon, and Akasha and the legendary Tangerine Summers welcomed them into the Macon drag community and helped them get their start.

The group met Pynk Dime at The Mill, and when they started hanging out, Dime kept telling them how much she wanted to perform in drag.

Dime started performing and loved the feeling of being Pynk Dime, she said.

“My drag persona almost takes over, if that makes sense. I’m already naturally like bubbly and just like to have a fun time but Pink is even more so. She’s, like, super animated like a come to life cartoon character, and it’s a different feeling in my body and I just love it,” Dime said.

Christina said she got along with Dime well because they were similar in that they both were very strong minded but also sensitive.

“We understand each other a lot better when it comes to certain things so when I met Pynk, I just knew we were going to always be close,” Christina said.

Although he is not a drag queen, DJ B3, who has been a DJ for 12 years, has been the group’s DJ since its inception, he said.

“We have a mutual appreciation for each other’s art form, and they liked me for the way and style that I DJ and I liked them for the style of drag they do,” he said. “We’re like a creative mastermind mesh together of all of the arts combined.”

Coco Iman Starr, the final addition to The Tribe, reached out in 2020 to drag queens on Facebook to find people to perform with her in a show, and Christina volunteered.

After performing with Starr, Christina asked if she would like to perform in Middle Georgia for one of The Tribe’s shows. She added to the group’s performance, so they decided to make her a permanent cast member, Christina said.

“We just kind of meld really well together, honestly. We like to have fun. We’re all hard headed. We’re all rude, we all nasty. But, we have a lot of fun together,” Yutoya said with a laugh. “Every day we find more and more people who want to be friends with us, want to party with us, want to book us. We just try and go out there and be the best people we can be to keep the legacy alive.”

CREATING A COMMUNITY IN MIDDLE GEORGIA

When she first started performing, Leon said people thought she was crazy for performing in Macon and told her Atlanta would be a better place, she said.

“Why would I go to Atlanta when Macon is known for music and just art in general? Middle Georgia has so much potential and money,” Christina said.

Christina hasn’t faced many issues or adversity performing in Middle Georgia, and she attributes that to the drag queens and LGBTQIA+ activists who came before her, she said.

“I feel like the Middle Georgia community is a lot different from what it used to be,” she said. “I think the legends like Jim Crisp and Tangerine Summers… and so forth, so on, they made that change possible for people like me to just pick up the torch and keep running with it.”

Yutoya said Christina wants to do more community outreach and events throughout the year so that kids growing up now will have a place to go and meet other people like them.

“There’s room in Macon for more drag. I mean, we aren’t the first and we’re not going to be the last,” Yutoya said.

Christina eventually wants to move on to make music and perform elsewhere, but she said it’s not time yet.

“I want for there to be a community here because I’m not going to be here forever,” she said. “Middle Georgia is too big to not have a community that loves and supports each other.”

The Macon Pride Festival in September showed an outpouring of support for the LGBTQIA+ community in Middle Georgia from kids who were attending their first Pride event to parents coming to support their children, Christina said.

“There was just a pour out of love, nothing but love in the air, which as a person that feeds off of crowd participation, it made me very happy to see and to know that I had a hand in the preparation for that was amazing,” she said.

The Tribe performed and hosted multiple events for the Macon Pride Festival including a night of drag at the Hargray Capitol Theatre that featured Lala Ri, an Atlanta-based drag queen who was a participant in RuPaul’s Drag Race Season 13.

Christina hopes the LGBTQIA+ community and its allies in Middle Georgia continues to grow and allows her to pass the torch to a new generation of drag queens.

“We call ourselves the Tribe for a reason. When you come in and you’re one of our people. You’re part of the family too. I think that’s honestly why we have the following we have because to us it’s not about the drag,” she said. “I love the fact that everyone supports us, and I hope they continue to support us, and we continue to grow.”