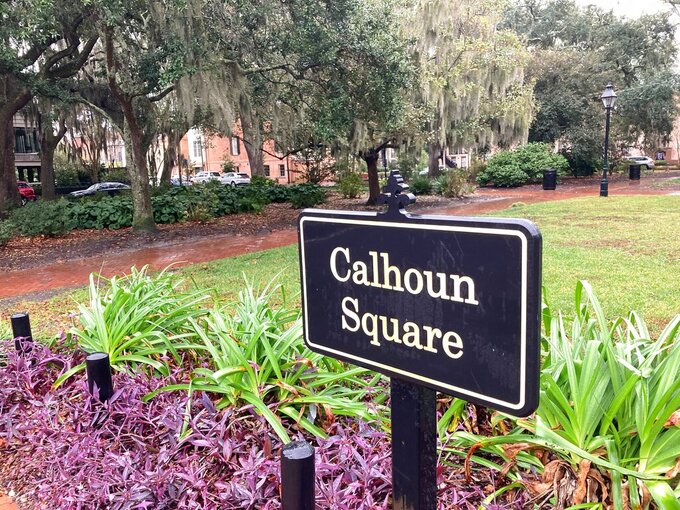 Russ Bynum, ASSOCIATED PRESS
A sign stands at the entrance to Calhoun Square in the downtown historic district of Savannah, Ga., on Thursday, Nov. 10, 2022. The Savannah City Council has voted to remove Calhoun's name from the square, which was named in 1851 for John C. Calhoun, a former U.S. vice president and senator who was also an outspoken advocate of slavery in the decades preceding the Civil War. The move comes two years after a statue of Calhoun was taken down in Charleston, S.C. Savannah officials say the square that bore Calhoun's name for more than 170 years will be renamed later. (AP Photo/Russ Bynum)

SAVANNAH, Ga. (AP) — Leaders of Georgia's oldest city voted Thursday to strip the name of a former U.S. vice president and vocal slavery advocate from the public square named in his honor more than 170 years ago.

Plotted in 1851, Calhoun Square was named for John C. Calhoun, a prominent politician from neighboring South Carolina, who before his death in 1850 spent decades in Washington serving in Congress and as vice president under Presidents John Quincy Adams and Andrew Jackson.

Calhoun was also outspoken in his support of slavery during the decades preceding the Civil War. That has made him a target in recent years of racial justice advocates in Savannah and elsewhere seeking to remove from public spaces statues and other honors to the Confederacy and white supremacists.

The Savannah City Council voted unanimously to remove Calhoun's name from the square during a meeting Thursday afternoon. The mayor said it could take a year for city officials to decide on a new name.

“John Calhoun had a phenomenal career as an American statesman. On that side of it, he is a legend,” said Savannah Mayor Van Johnson, who nonetheless said he supported removing Calhoun's name because his views on race don't “reflect Savannah in 2022.”

"I think the views of Mr. Calhoun really propagated, supported and promoted slavery," said Johnson, who like 54% of Savannah's population is Black.

Calhoun Square was among the last of two dozen public squares established in Savannah's downtown historic district between 1733 and 1851. With towering live oaks and blooming azaleas framing benches at its center, the square is surrounded by Greek Revival homes and two city landmarks — Wesley Monumental United Methodist Church, dedicated in 1890, and the 1855 Massie Common School House, one of Georgia's oldest public school buildings.

A block to the north is Clary's Cafe, the diner featured in author John Berendt's 1994 bestseller “Midnight in the Garden of Good and Evil.”

Before Savannah acted, honors had been stripped from Calhoun in his home state of South Carolina. City officials in Charleston dismantled a statue of Calhoun in one of its squares in 2020, and Clemson University removed his name from its honors college the same year.

In the early 1800s, Calhoun became known as “The Cast-Iron Man” for his unbending support of Southern states’ rights. He called slavery a “positive good” and said in speeches on the U.S. Senate floor in the 1830s that Southern slaves were better off than free Blacks in the North. With his pro-slavery “Calhoun Doctrine,” he led the South toward secession before he died in 1850.

Some in Savannah opposed taking Calhoun's name off the square, where it had long been printed in bold white letters on signs as well as on a metal plaque embedded in a brick walkway.

Calhoun earned the honor through his four decades of service in Washington,, said Andy Calhoun, a Savannah native who says he is a descendant of John C. Calhoun's brother. In addition to serving in both houses of Congress and as vice president under two presidents, John C. Calhoun had also been a U.S. secretary of war and secretary of state.

“It’s obvious why the city of Savannah honored his statesmanship," said Calhoun, 69. “He wasn’t honored for his views on domestic slavery.”

He added: “Why people are so intent on revising history, I just don’t get it.”

“I think it should be a day of cleansing, because of the rain," said Gunn, a Savannah native and slave descendant. "And by removing Calhoun, it will be part of a healing process.”

Gunn spent the past two years leading a group of advocates in calling for a new name for Calhoun Square.

A major hurdle for the group was a city ordinance requiring a majority of property owners on the square to agree to any name change. Gunn said her coalition got the required signatures three times, only to see homes of supporters sold to new owners. That negated their name-change petition before city officials could act.

Johnson and allies on the city council agreed on a workaround. Their vote Thursday was solely to remove Calhoun's name from the square. The mayor said he plans to give property owners and other residents a chance later to help decide on a new name for the square.

"If it takes a year to do, I’m not mad about it,” Johnson said in an interview.

The mayor asked Savannah's city manager to have signs in the square bearing Calhoun's name removed immediately. Until there's a new name, he said, it should be called “the square formerly known as Calhoun Square.”