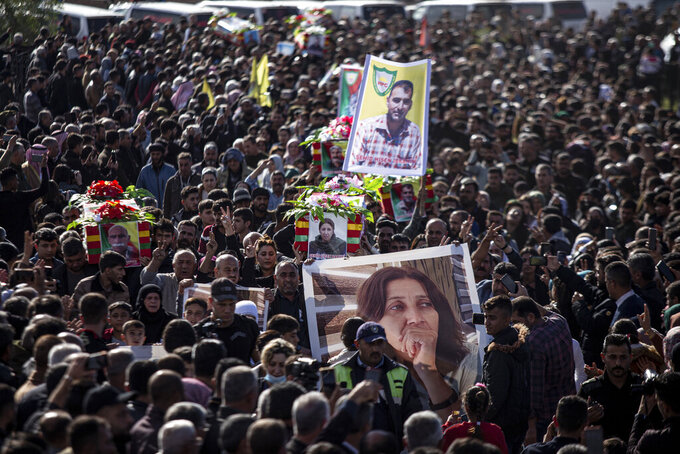 ANKARA, Turkey (AP) — Suspected Kurdish militants in Syria fired rockets across the border into Turkey on Monday, killing at least two people and wounding 10 others, Turkish officials said. The attack followed deadly airstrikes by Turkey on suspected militant targets in Syria and Iraq.

One of the rockets landed near a school in the town of Karkamis in Gaziantep, and the explosion smashed the window of a teachers' room, killing a 22-year-old teacher, Interior Minister Suleyman Soylu said. A 5-year-old boy was killed when a house in Karkamis was also hit in the attack.

A pregnant woman who was reported to be dead was in fact in serious condition in the hospital, the minister said, correcting an earlier death toll to two.

Schools in the area were closed down, the minister said.

A soldier and seven Turkish police officers were wounded overnight in separate shelling by suspected Kurdish militants in nearby Kilis, Soylu said.

Turkey will respond to the attacks “in the strongest way possible,” he added.

The Kurdish-led Syrian Democratic Forces opened fire toward Karkamis from its positions near the Syrian border town of Kobani, to the Syrian Observatory for Human Rights, an opposition war monitor.

The Observatory reported that Turkish warplanes resumed airstrikes on Monday, hitting several areas including near the border town of Kobani. It said Turkish artillery also retaliated to the rocket attacks by firing at areas in Syria near the town of Tel Rifaat as well as the outskirts of the village of Ein Issa.

“The traitors who continue with their attacks against innocent civilians ... and go as low as to target schools, were held accountable for their actions,” the ministry said on Twitter.

While Kurdish-led forces in Syria have not commented nor claimed responsibility for the attacks, the Syrian Democratic Forces in Monday vowed to respond to Turkish airstrikes “effectively and efficiently at the right time and place.”

The rocket attacks came days after Turkey launched deadly airstrikes over northern regions of Syria and Iraq, targeting Kurdish groups that Ankara holds responsible for a Nov. 13 bomb attack in Istanbul. The bomb rocked a bustling avenue in the heart of Istanbul on Nov. 13, killing six people and wounding over 80 others.

Turkish authorities blamed the attack on the PKK and its Syrian affiliate the YPG. The Kurdish militant groups have, however, denied involvement.

The Turkish warplanes attacked bases of the outlawed Kurdistan Workers’ Party, or PKK, and the Syrian People’s Protection Units, or YPG on Saturday night and on Sunday. Turkish officials claimed that 89 targets were destroyed and a “large number” of what it designated as “terrorists” were killed in the airstrikes.

The Observatory said 35 people were killed in airstrikes over the weekend including 18 Kurdish fighters, 16 Syrian government soldiers and a local journalist.

On Monday, Turkish President Recep Tayyip Erdogan signaled that Turkey was also contemplating a ground incursion against the militant groups, saying the operation would not be “limited to an air campaign.”

Turkey has launched three major incursions into northern Syria since 2016 and already controls some Syrian territory in the north.

Ankara and Washington both consider the PKK a terror group, but disagree on the status of the YPG. Under the banner of the Syrian Democratic Forces, the YPG has been allied with the U.S. in the fight against the Islamic State group in Syria.

The PKK has fought an armed insurgency in Turkey since 1984. The conflict has killed tens of thousands of people since then.

The U.S. Embassy on Monday said it joined Turkey in mourning those killed in Karkamis. “We strongly condemn this violent and unjustified attack,” it said.

In Berlin, German Foreign Ministry spokesman Christofer Burger said Germany expressed solidarity with Turkey following the recent attack in Istanbul and that it takes seriously indications that the PKK or linked groups in Turkey were responsible.

He said, however, that civilians must be protected at all times.

“We call on Turkey and all other participants not to do anything that would further exacerbate the already tense situation in northern Syria and Iraq,” Burger said.