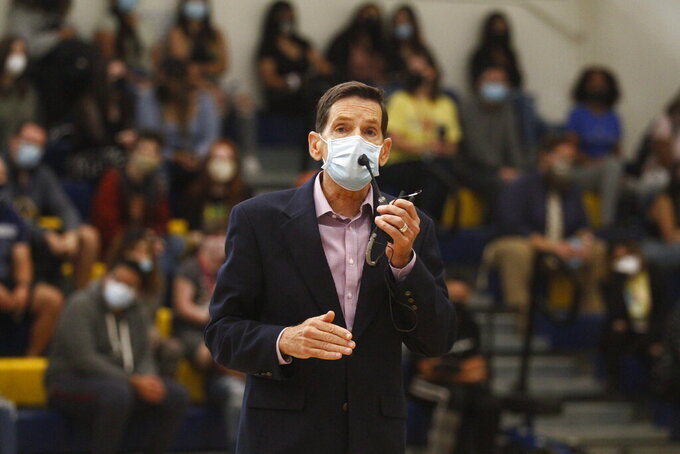 Cedar Attanasio, ASSOCIATED PRESS
FILE - In this Aug. 11, 2021, Incoming Education Secretary Kurt Steinhaus addresses student on the first day of their fall semester at Highland High School in Albuquerque, N.M. State education officials are offering to pay for salaries of 500 teaching assistants and offer them tuition subsidies in a two-year effort to jumpstart recruitment in K-12 schools. "This program can serve as a pathway for more people to enter the education profession," Public Education Secretary Designate Kurt Steinhaus said in an announcement Wednesday, Sept. 8, 2021. (AP Photo/Cedar Attanasio, File)

SANTA FE, N.M. (AP) — State education officials are offering to pay for the salaries of 500 teaching assistants and offer them tuition subsidies in a two-year effort to jumpstart recruitment in K-12 schools.

“This program can serve as a pathway for more people to enter the education profession,” Public Education Secretary Designate Kurt Steinhaus said in an announcement Wednesday.

Educational assistants help out in the classroom but are not full-fledged teachers. They can’t lead instruction or implement curriculum, and they don’t need to have a degree. This year many have served as monitors for teachers presenting remotely.

The $37 million New Mexico Teacher Fellows program is funded by the education department's share of $1 billion in federal money from relief packages passed in response to the coronavirus pandemic.

Around 90% of those federal funds are being sent directly to school districts. On Thursday, the education department released a database that shows some of the initial spending, mostly on laptops and other emergency tools for remote learning.

At the height of the pandemic, the education department used initial federal funds for emergency school needs like protective gear, temporary WiFi hotspots, and online learning supports like software.

But the largest portion of funding is yet to be spent.

Around 600 teaching positions were vacant in the state in 2020.

While the pandemic forced fewer retirements than education officials feared, New Mexico is tied for the oldest group of teachers in the nation. Attempts to bring teachers from outside the country have served as an imperfect stopgap, and substitute teachers are in short supply.

The fellowship program aims to keep teaching assistants on the job and advance their careers so that they can fill higher-paying jobs in the future before they leave for another industry with higher pay.

Teacher assistants earn around $25,000 per year, at or below minimum wage in some New Mexico towns. Even for part-time work, the positions are not competitive with entry-level jobs in other industries, like hospitality and construction.

Education department officials hope local districts will take advantage of the state paying for base salaries to increase pay, for example by using a school district’s own federal funds.

The education department plans to start awarding teaching fellowships by the end of the year.

The 500 fellows will have access to mentors outside their school, and a $4,000-per-year education stipend to pursue a degree at a community college or start towards a higher degree.

They don’t even have to study education and could put the stipend toward a degree useful on a school campus. That includes nursing, social work and speech pathology, said Gwen Perea Warniment, ​​deputy secretary of Teaching, Learning and Assessment.

“All of them are important for school, and we’re in dire need of all positions,” Warniment said.