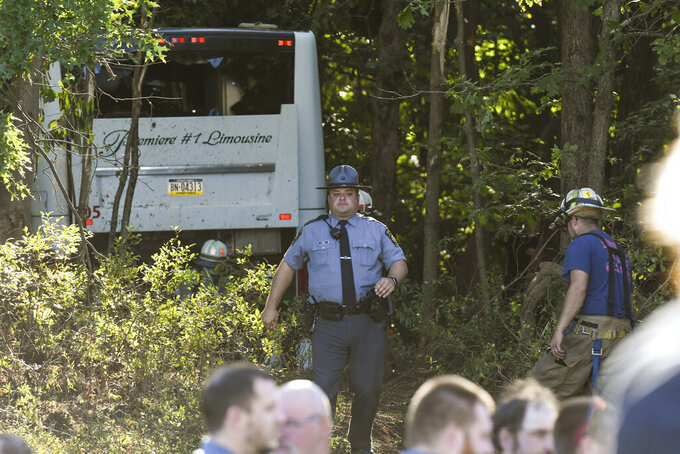 Jacqueline Dormer, ASSOCIATED PRESS
First responders work the scene after a Premiere #1 Limousine bus crashed into a wooded area off I-81 in Frailey Township, Pa., on Sunday, Sept. 19, 2021. The bus was traveling on I-81 south and came off the Hegins exit ramp, crossing through the divider on Rt. 25 and crashing into a wooded area off Rt. 25 where it came to a stop. (Jacqueline Dormer/Republican-Herald via AP)

State police in Schuylkill County said the bus was heading south on Interstate 81 in Frailey Township shortly after 2:30 p.m. Sunday when it went out of control near the Hegins exit, struck an embankment and went into a wooded area.

LCBC Church said 31 high school freshman and sophomore girls as well as volunteer leaders from the Manheim campus in Lancaster County were in one of three buses returning from a high school ministry retreat at Lake Champion in New York. The other two buses arrived safely.

As of Sunday evening, two-thirds had been discharged while one-third remained hospitalized, officials said.

“Please join us in praying for those involved in the accident, their families and friends, our staff and our entire LCBC family," the church said.

Police said Monday that the 37-year-old driver, who was seriously injured, was interviewed at the scene and would be interviewed later at the hospital, police said.

Tremont’s fire chief talked to WNEP-TV about the challenge of getting the injured out of the bus.

“When something like this happens, it’s people shaking all around the bus. It takes some time to get in and get people out of the situation," Chief Brian Eisenacher said. “The guys on the bus did a great job. We took out what we had to take out. Everybody was out and on their way to the hospital pretty quickly."

Police said the cause of the crash is under investigation.