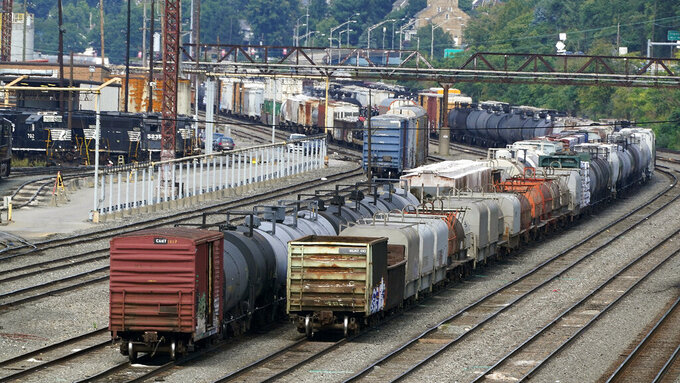 Gene J. Puskar, ASSOCIATED PRESS
FILE - Freight cars wait to be hauled out of the Norfolk Southern Conway Terminal in Conway, Pa., Sept. 15, 2022. The possibility of an economically devastating railroad strike has been pushed back into early December to allow time for engineers and conductors to vote on their agreements with the freight railroads and give more opportunity for the industry to renegotiate with two unions that rejected their deals last month. (AP Photo/Gene J. Puskar, File)

OMAHA, Neb. (AP) — The possibility of an economically devastating railroad strike has been pushed back into early December to allow time for engineers and conductors to vote on their agreements with the freight railroads and give more opportunity for the industry to renegotiate with two unions that rejected their deals last month.

Previously, a Nov. 19 strike deadline hung over the talks, but the Brotherhood of Maintenance of Way Employes Division union that represents track maintenance workers agreed Wednesday to delay any action at least until Dec. 4. So for now the trains operated by BNSF, Union Pacific, Norfolk Southern, CSX, Kansas City Southern and other railroads will continue delivering the raw materials and finished products that so many businesses in all industries need.

The railroads are offering the biggest raises workers have seen in more than four decades, but railroads have resisted union demands to add paid sick time, and the new contracts won't resolve all the workers' quality of life concerns.

All 12 rail unions must approve their deals to prevent a strike. Seven unions have ratified their five-year contracts with 24% raises and $5,000 in bonuses so far, but the BMWED and Brotherhood of Railroad Signalmen unions rejected their agreements. Three other unions are voting this month, and the two biggest unions that represent conductors and engineers aren't set to announce their results until two days after the previous Nov. 19 deadline.

“This agreement to extend the cooling off period affords all unionized employees the opportunity to vote on their agreements free of a looming strike threat,” said Ian Jefferies, president and CEO of the Association of American Railroads trade group.

The outcome of the votes by the Brotherhood of Locomotive Engineers and Trainmen and the Transportation Division of the International Association of Sheet Metal, Air, Rail and Transportation Workers unions will play a major role in determining how this contract dispute is resolved because those workers that operate the trains have the most quality-of-life concerns about demanding schedules that keep them on call 24-7.

And the renewed talks with the BMWED and BRS unions have stalled over the issue of paid sick time because the railroads don't want to offer much more than what a panel of arbitrators President Joe Biden appointed recommended this summer. And the industry argues that the unions have agreed to forego paid sick time over the years in favor of higher wages and strong short-term disability benefits.

The unions argue that the pandemic highlighted the need for the basic benefit of paid sick time that is taken for granted in most industries because the railroads temporarily offered some paid time off for COVID-related absences.

The economic stakes of this contract dispute are so high that Congress is expected to step in and block a strike if the two sides can't agree. Hundreds of business groups have urged lawmakers and Biden to be ready to intervene if necessary.

The unions say they believe the railroads are banking on the idea that Congress won't order them to offer more than the Presidential Emergency Board of arbitrators recommended.