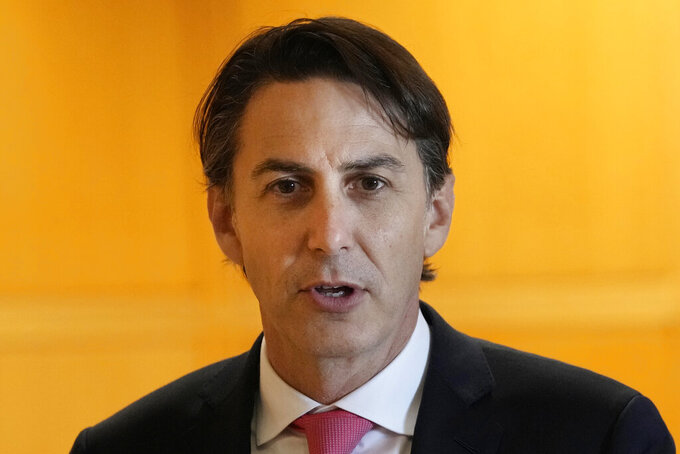 Hussein Malla, ASSOCIATED PRESS
U.S. Envoy for Energy Affairs Amos Hochstein, speaks to journalists at Beirut Rafik Hariri international airport after his meeting with the Lebanese officials, in Beirut, Lebanon, Friday, Sept. 9, 2022. Hochstein mediating between Lebanon and Israel over the two neighbors disputed maritime border said Friday he is hopeful that an agreement can be reached between the two nations. (AP Photo/Hussein Malla)

BEIRUT (AP) — The U.S. envoy mediating between Lebanon and Israel over the two countries' disputed maritime border said Friday some progress has been made but that more work needs to be done to resolve the issue.

Amos Hochstein, a senior adviser for energy security at the U.S. State Department, has been mediating between the two countries and shuttling between Beirut and Jerusalem as tensions remain high near the tense border after Lebanon’s Iran-backed militant Hezbollah group and Israel exchanged threats recently.

He spoke on Friday, at the end of a brief visit to Beirut where he met with top officials, including President Michel Aoun, Parliament Speaker Nabih Berri and caretaker Prime Minister Najib Mikati.

"I think we’re making very good progress. I’m very hopeful that we can reach an agreement,” he said after the meeting with Aoun.

Later, Hochstein told reporters at the airport before leaving that “I’m very hopeful with what we discussed today but still more work needs to be done.”

Mikati's office said in a statement that the two discussed ideas that Hochstein brought with him, adding that Lebanese officials will study them and “give an answer soon.”

A Lebanese official who attended the talks told The Associated Press that the proposal put forward by the U.S. envoy gives Lebanon the right to the Qana field, which is partly in Israel's domain. A part of it stretches deep into the disputed area. The official added that the main point now is how to draw the demarcation line in a way that stretches south of Qana.

In 2017, Lebanon approved licenses for an international consortium by France’s Total, Italy’s ENI and Russia’s Novatek to move forward with offshore oil and gas development for two of 10 blocks in the Mediterranean Sea, including one that is disputed in part with neighboring Israel.

The official, who spoke on condition of anonymity in line with regulations, said that France's Total said that as soon as a deal is reached it will start exploration in the border area.

Last month, Novatek announced it is withdrawing from the consortium. Lebanese media reported that a Qatari company will take over from the Russian firm.

This was Hochstein's first visit to Lebanon since late July. The previous visit came after Israel set up a gas rig at its designated location at the Karish field. Israel says the field is part of its U.N.-recognized exclusive economic zone, while Lebanon insists Karish is in a disputed area.

In July, the Israeli military shot down three unarmed Hezbollah drones flying over the Karish field. Last month, Hezbollah's leader issued a warning to Israel over the maritime dispute, saying that “any arm” that reaches to steal Lebanon’s wealth “will be cut off.”

The heavily armed Hezbollah, which has fought several wars with Israel, has repeatedly said in the past that it would use its weapons to protect Lebanon’s economic rights. Still, Hezbollah officials have said they would endorse a deal reached between Lebanon's government and Israel.

The U.S.-mediated indirect talks between Lebanon and Israel have been stalled since last year amid disagreements within Lebanon over how big the disputed area is.

Last year, the Lebanese delegation in the talks — a mix of army generals and professionals — offered a new map that pushes for an additional 1,430 square kilometers (550 square miles) as Lebanese territory.

Hochstein had said that a solution to the border crisis would help Lebanon pull out of its economic meltdown that began in October 2019, leaving more than 75% of its people in poverty.