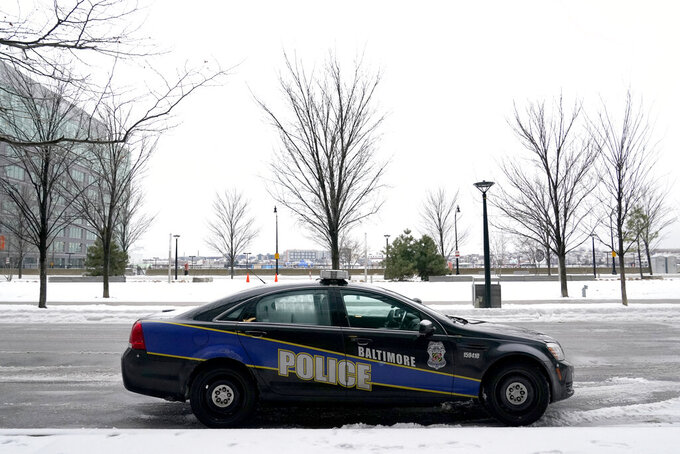 Julio Cortez, ASSOCIATED PRESS
FILE - In this Thursday, Feb. 18, 2021, photo, Baltimore police cruiser is seen parked near a building while officers check on a call, in Baltimore. A report by the Maryland attorney general says an independent unit investigated 23 fatalities involving police in in its first year. The first annual report on the unit released Tuesday, Nov. 29, 2022, says that so far none of the investigations has resulted in officers being charged. (AP Photo/Julio Cortez, File)

ANNAPOLIS, Md. (AP) — A unit in the Maryland attorney general's office investigated 23 fatalities involving police in its first year and so far none of the investigations have resulted in officers being charged, the office said Tuesday.

The unit completed reports on 13 cases in the first year, according to the report. In that time, local prosecutors have made decisions not to prosecute in 11 cases. While the law empowers the Independent Investigations Division to probe the cases and provide facts to local prosecutors, prosecutors decide whether to bring charges.

Dana Mulhauser, chief of the division, said the unit focuses on providing an independent, thorough and transparent investigation.

“We are trying as much as possible to help people understand what happened, and then whether there is a prosecution or not that's a decision under current law that goes to prosecutors' offices, and that's theirs to make and not ours,” Mulhauser said.

The unit was created last year by the Maryland General Assembly to “investigate all alleged or potential police-involved deaths of civilians” throughout the state. It was part of a package of police reform laws approved after the death of George Floyd in Minnesota and the nationwide protests that followed.

The Maryland law marked a change in prior practice, when local officers would investigate within their department.

“The IID’s first annual report contains detailed information on the circumstances and nature of police-involved fatalities in Maryland, and what my office is doing to investigate them fairly and with transparency,” Attorney General Brian Frosh said in a news release announcing the report.

The report covers the period from Oct. 1 of last year to Sept. 30, the first year the division was operational. In that time, there were 13 cases of fatal shootings by police, seven people died during vehicle pursuits and three died in custody.

Seven people brandished a firearm prior to being shot by officers, the report said, three had a knife and five were unarmed. Three of those five were in custody at the time and died after a medical emergency or drug overdose. In the final case, the decedent implied he had a weapon and was holding a medical walking cane immediately prior to being shot.

Of the 23 fatal shootings, 21 of those shot were men, and two were women; 14 were Black, six were white and three were Hispanic.

Eleven cases involved more than one officer, with 45 officers involved in the 23 total cases. Thirteen of them were under 30 years old, and 34 had 10 or fewer years of experience.

“There is a much stronger correlation to experience than there is to age,” Mulhauser said.