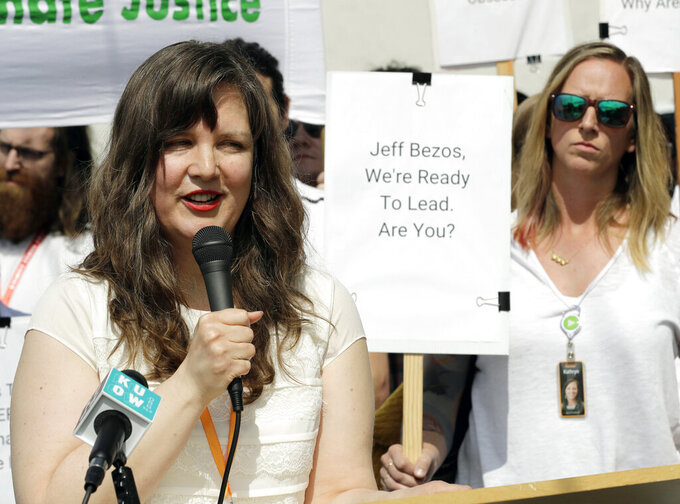 NEW YORK (AP) — Amazon is settling with two former tech workers who accused the retail giant of illegally firing them last year for speaking out against the company.

The former employees, Emily Cunningham and Maren Costa, publicly criticized the company and pushed Amazon to better protect warehouse workers from COVID-19. They also wanted Amazon to do more to reduce its impact on climate change.

Cunningham and Costa said the settlement means Amazon will have to pay them lost wages and put up notices saying the company can't fire workers for organizing and exercising their rights.

“This is a win for protecting workers rights, and shows that we were right to stand up for each other, for justice, and for our world," Cunningham and Costa said in a statement.

In settling, Amazon also avoids a potentially lengthy hearing before the National Labor Relations Board. Amazon said in a statement Thursday that it welcomes “the resolution of this matter.”

The former employees, who were user-experience designers at Amazon in Seattle, were the two most prominent voices among a group of workers who wanted the company to take more steps to combat climate change and stop doing business with oil and gas companies. They held protests and spoke to the media about their concerns.

Last year, as COVID-19 spread in the U.S., Cunningham and Costa were fired after helping to plan a call between Amazon warehouse and office workers to talk about unsafe conditions in the online shopping giant’s warehouses, where people worked throughout the pandemic to pack and ship online orders.

At the time Amazon said it fired them for violating internal policies, not because they talked publicly about working conditions or sustainability.

Shortly after, an Amazon executive quit in protest, saying he couldn’t stand by as whistleblowers were silenced.

This story has been corrected to remove a reference to a call between workers on safety conditions not happening. The call in fact still happened.