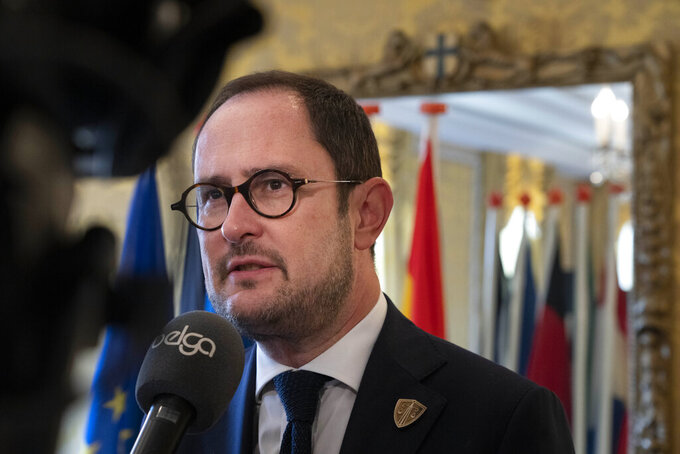 The Netherlands, Belgium, Germany, France, Italy and Spain made the commitment at a meeting of ministers and officials in Amsterdam, a city afflicted by drug-related violence in recent years.

Belgian Justice Minister Vincent Van Quickenborne knows first-hand the lengths that criminal gangs will go to safeguard their multibillion-euro (dollar) business. He was put under protection last month after four people suspected of taking part in a plot by alleged drug criminals to kidnap him were arrested in the Netherlands.

“I think we’ve entered in a new phase, a new phase called narco-terrorism, a phase where the narco-terrorists try to destabilize the society and get their grip on society," Van Quickenborne told The Associated Press. "And of course, we will never allow our countries to become narco-states like you see them sometimes in Latin America.”

Asked about the kidnap plot, he said: "this has been a very tough period for myself, especially for my family; my wife and my children”

In a closing statement, the countries pledged to strengthen ports and maritime security, clamp down on criminal business models, strengthen their use of technology in tackling organized crime and to improve international cooperation.

“Criminals do not know borders, so we have to work together,” Van Quickenborne said after the meeting that was also attended by representatives from European Union police and justice agencies Europol and Eurojust along with officials from the European Commission.

Amsterdam, the capital of the Netherlands, saw a series of underworld hits in recent years including the slaying of crime reporter Peter R. de Vries and a lawyer representing a witness in a gangland killings investigation.

The Netherlands and Belgium are home to the major ports of Rotterdam and Antwerp, two of Europe's main entry points for cocaine. More than 214 tons of the drug were seized in Europe in 2020, a 6% increase from the previous year, and experts from the European Monitoring Center for Drugs and Drug Addiction believe that amount could reach 300 tons this year.

With a street value estimated at 10.5 billion euros in 2020 and about 3.5 million European citizens reporting having used it in the past year, cocaine is the second-most used drug in the EU after cannabis.

The expansion of the cocaine market has gone hand in hand with a rise in violence and corruption in the EU, with fierce competition between traffickers leading to a rise in homicides and intimidation.

“As soon as it gets too hot for drug criminals in the port of Rotterdam, they move to Antwerp or Hamburg and vice versa. In doing so, they threaten and intimidate everything that is dear to us in order to further their illegal practices,” she added.