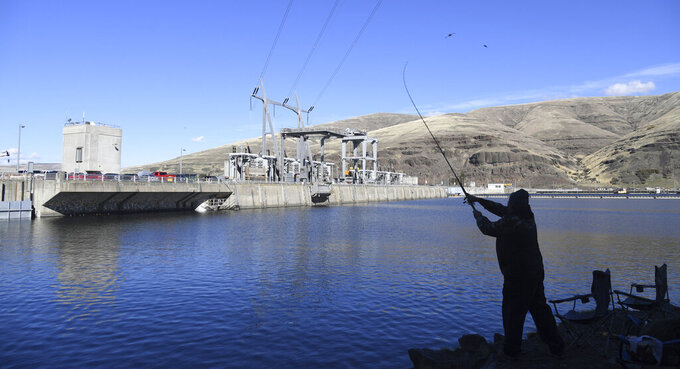 Jesse Tinsley, ASSOCIATED PRESS
FILE - In this Oct. 19, 2016, file photo, a man fishes for salmon in the Snake River above the Lower Granite Dam in Washington state. A coalition of 17 environmental groups are speaking out against a key part of a sweeping plan to remove the lower Snake River dams to save salmon and steelhead. The groups said in a letter to Democratic senators in Oregon and Washington that the 35-year moratorium on fish- and dam-related lawsuits included in Idaho Republican Rep. Mike Simpson's proposal in exchange for dam removal was too high a price to pay, the Idaho Statesman reported Saturday, March 27, 2021. (Jesse Tinsley/The Spokesman-Review via AP, File)

BOISE, Idaho (AP) — A coalition of 17 environmental groups is speaking out against a key part of a sweeping plan to remove the lower Snake River dams to save salmon and steelhead.

The groups said in a letter to Democratic senators in Oregon and Washington that the 35-year moratorium on fish- and dam-related lawsuits included in Idaho Republican Rep. Mike Simpson’s proposal in exchange for dam removal was too high a price to pay, the Idaho Statesman reported Saturday.

A years-long ban on lawsuits will make federal and state laws on clean water standards and species protections harder to enforce, the groups said in the letter to Washington Sens. Patty Murray and Maria Cantwell and Oregon Sens. Jeff Merkley and Ron Wyden.

The groups urged the lawmakers to oppose the proposal “as written,” but said they generally support the idea of breaching the dams and helping impacted communities. The letter argues that the reason salmon aren't yet extinct on the Snake River is because of lawsuits to protect their habitat under environmental laws that were enacted after the dams were already built.

“The Clean Water Act and the Endangered Species Act are critical to protecting wild salmon and protecting water quality, and when you are removing the enforcement of those for many years, you could actually be doing more harm than the dams are causing,” said Kurt Beardslee, executive director of the Wild Fish Conservancy.

Simpson last month released his $33 billion legislative concept to breach the dams and mitigate affected industries and communities through a wide range of investments. It includes funding to replace power produced at the dams, to help farmers get wheat and other grains to market, and to help communities like Lewiston.

To address what some in the region see as the “slippery slope” of dam removal, the concept includes a 35-year moratorium on ESA, Clean Water Act and National Environmental Policy Act lawsuits on most of the remaining dams in the Columbia River Basin and it would extend federal licenses at those dams for 35 years.

It would also set up regional watershed partnerships between agricultural interests, conservation groups and Native American tribes aimed at improving water quality. Farmers participating in the voluntary partnerships would be shielded from Clean Water Act lawsuits for 25 years.

Some environmental groups such as the Idaho Conservation League, Trout Unlimited and the Save Our Wild Salmon Coalition support Simpson’s proposal. But the congressman has also faced stern criticism from agricultural groups, state legislators and county commissioners from both Idaho and Washington.

Todd True, an attorney from the environmental law firm EarthJustice who has represented many of the salmon advocates who support Simpson’s concept, said he sees it as the type of comprehensive proposal that could help save the fish. But he sees Simpson’s proposal as a starting point instead of a finished product.

“It’s not perfect. There are difficult issues that it raises. We are ready to have the hard conversations to find a way forward and resolve those issues,” he said. “The limits on access to the courts is one of the difficult issues.”

David Moskowitz, executive director of The Conservation Angler, one of the groups that signed the letter, said while his group opposes Simpson’s proposal, the groups agree it can be improved and hope the senators from Washington and Oregon do so. For example, he said it might be possible to narrow the litigation moratoriums.

“I think the Oregon and Washington delegation should be able to really work on the positives that are there and on the things that are too broad right now, like this litigation prohibition,” he said.

Moskowitz took them to task for leaving it to an Idaho Republican to try to save the fish.