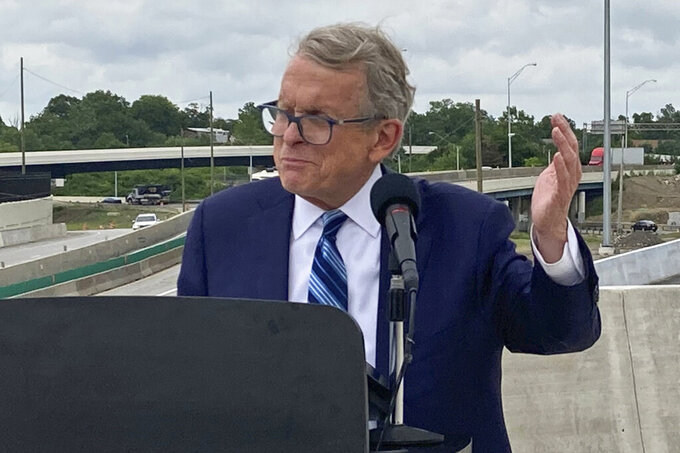 Andrew Welsh Huggins, ASSOCIATED PRESS
FILE - In this July 13, 2021 file photo, Ohio Gov. Mike DeWine promotes a new entrance ramp onto I-70 in downtown Columbus, Ohio. DeWine says Democratic President Joe Biden made a mistake in ordering new federal vaccine requirements. He says the country should focus on the science of preventing the spread of the coronavirus, arguing the vaccine is the best tool to do that. But he said Friday, Sept. 10, 2021 that people and business owners should make their own decisions about vaccination. (AP Photo/Andrew Welsh-Huggins, File)

The directive issued by Biden, a Democrat, a day earlier could require vaccines for as many as 100 million Americans, including private-sector employees, health care workers and federal contractors.

“I think the President made a mistake by announcing federal vaccine mandates,” DeWine, a Republican, said in a tweet.

“We should be focused on the science of preventing virus spread — the vaccine is our best tool to stop COVID — but people and business owners should make their own decisions about vaccination,” the governor tweeted.

DeWine took an early and aggressive stance against the coronavirus, becoming the first governor to close schools in the spring of 2020 and later issuing a statewide mask mandate.

But he's stepped back from talk of mandates since, hinting his hands were tied by fellow Republican lawmakers when they passed a bill limiting an Ohio governor's ability to issue public health orders.

However, DeWine also opposes a GOP bill currently pending in the Legislature that would prohibit employers from requiring vaccines of any kind. He similarly called that bill “a mistake,” saying specifically that, in the case of hospitals, it would strip their authority to decide how to keep patients safe.

The seven-day rolling average of daily new cases in Ohio has risen over the past two weeks from 3,759.43 new cases per day on Aug. 25 to 5,949.86 new cases per day on Sept. 8, according to data collected by the Johns Hopkins University Center for Systems Science and Engineering. The state Health Department reported 9,019 new coronavirus cases Friday, the highest single-day total since early January.

Only 20 states rank worse for the percentage of vaccinated residents, according to data from the Centers for Disease Control and Prevention.

Associated Press writer Julie Carr Smyth in Columbus contributed to this report. Follow AP’s coverage of the pandemic at https://apnews.com/hub/coronavirus-pandemic.