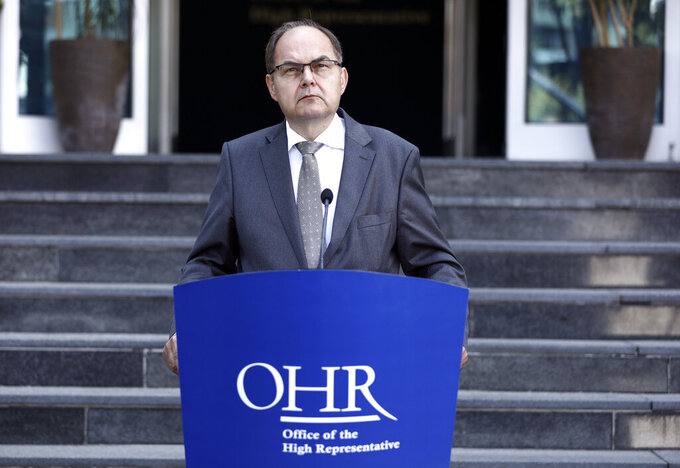 Uncredited, ASSOCIATED PRESS
FILE - In this Monday, Aug. 2, 2021 file photo, Christian Schmidt, new head of Bosnia's Office of the High Representative, or OHR, speaks during a ceremony in the capital Sarajevo. The chief international representative in Bosnia has on Tuesday, Nov. 2 warned that the war-scarred Balkan state could face the biggest “existential threat of the post war period” if Bosnian Serb separatist moves are not curbed by international community. In a report which he is scheduled to deliver to the UN Security Council this week, High Representative for Bosnia Christian Schmidt said that if Bosnian Serb leader Milorad Dodik carries out his separatist threats, including the withdrawal of Serb troops from the joint Bosnian army and the creation a separate Serb force, “the prospects of further division and conflict are very real.”(AP Photo, file)

SARAJEVO, Bosnia-Herzegovina (AP) — The chief international representative in Bosnia is warning that the war-scarred Balkan nation could face the biggest “existential threat of the post-war period” if the international community does not curb threatened separatist actions by Bosnian Serbs.

High Representative for Bosnia and Herzegovina Christian Schmidt was scheduled to deliver the warning in a briefing to the U.N. Security Council but council said his appearance was canceled because of opposition from Russia, a close ally of Serbia and the Bosnian Serbs.

Schmidt.said “the prospects of further division and conflict are very real,” if Bosnian Serb leader Milorad Dodik withdraws Serb troops from the Bosnian army and creates a separate Serb force, according to excerpts of his prepared briefing carried by Bosnia’s Klix.ba portal.

Those moves and other threats, if carried out, would "ultimately undermine the state’s ability to function and carry out its constitutional responsibilities,” Schmidt wrote.

Schmidt, a senior German diplomat, called Dodik’s threatened actions “tantamount to secession without proclaiming it.” He said they “endanger not only the peace and stability of the country and the region, but – if unanswered by the international community – could lead to the undoing of the agreement" that ended the Bosnian War in 1995.

Dodik responded Tuesday by dismissing the report as “a propaganda pamphlet” that was written to “favor Bosnian Muslims.”

“If we are separatists, he is an occupier," Dodik said, adding that Schmidt represents no one.

The Bosnian War started in 1992 when Bosnian Serbs, with the help of the Yugoslav army, tried to create ethnically pure territories with an aim of joining neighboring Serbia. More than 100,000 people were killed and millions were left homeless during the worst bloodshed in Europe after World War II.

The war pitted Bosniaks, who are mostly Muslims, Serbs and Croats against each other and ended with the U.S.-sponsored peace agreement that created two regions, the Republika Srpska and the Bosniak-Croat Federation. The two regions were given wide autonomy, but kept some joint institutions, including the army, the top judiciary and tax administration. Bosnia also has a rotating three-member presidency made up of Bosniak, Serb and Croat members.

Dodik, the Bosnian Serb member of the presidency, has for years been advocating for the separation of the Bosnian Serb mini-state and having it become part of Serbia. Such a move would unlikely win support from the United States and much of the West.

Dodik, who has tacit support from Russia and Serbia, recently intensified his campaign, pledging that the Bosnian Serb parliament would by the end of November declare the creation of its own army, tax authority and judiciary.

He has threatened to take over the Bosnian army barracks located in the Serb half of Bosnia once the Bosnian Serb military is formed. He said if the West tries to intervene, he would call Bosnian Serb “friends” for help.

A U.N. Security Council session where Schmidt was to deliver the report was originally scheduled for Tuesday but was postponed until Wednesday afternoon, in hopes of reaching an agreement with Russia, which diplomats said proved impossible.

Schmidt was supposed to speak at a council meeting to extend the mandate of the EUFOR peacekeeping mission in Bosnia by one year. Diplomats, speaking on condition of anonymity because consultations have been private, said the vote to extend the EUFOR mission for a year will take place on Wednesday afternoon without a briefing.

Russia threatened to veto the resolution approving the extension unless all references to the high representative for Bosnia are removed — an apparent attempt to undermine Schmidt’s authority as the observer of the 1995 peace deal.

In July, the Security Council rejected a resolution put forward by Russia and China that would have immediately stripped the powers of the high representative and eliminated the position in a year.

Before the vote, Russia’s deputy U.N. ambassador Dmitry Polyansky accused the high representative of becoming like “a czar” with “almost post-colonial type” of powers. The Office of the High Representative has dismissed scores of officials, including judges, civil servants, and members of parliament since its inception and has been sharply criticized by Bosnian Serbs for not offering the possibility of appealing decisions.