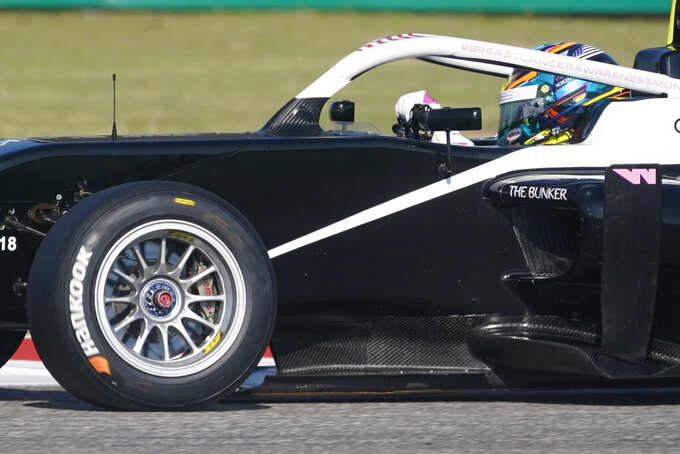 Darron Cummings, ASSOCIATED PRESS
Sabre Cook drives into a turn during a practice session for the W Series auto race at Circuit of the Americas, Friday, Oct. 22, 2021, in Austin, Texas. (AP Photo/Darron Cummings)

AUSTIN, Texas (AP) — Catherine Bond Muir has heard the critics complain that the W Series racing league she created wasn't boosting female drivers but segregating them from the best competition.

Here is what she sees: Young drivers in aggressive, wheel-to-wheel racing, crashing and restarting and getting more time in the cockpit in front of bigger crowds than they might have ever had before.

And that, she says, was and is the plan behind the W Series that hits American soil for the first time this weekend as part of Formula One's U.S. Grand Prix weekend in Texas. The W Series concludes its second season on the track — the pandemic wiped out the 2020 season — with races Saturday and Sunday at the Circuit of the Americas.

Gaining a foothold in the U.S. is critical to the future of a series she hopes will support and develop women for a long time.

“Our most important territory is the U.S.,” Bond Muir said. “America, beyond any other country, has a history of being supportive of women's sport."

The W Series was hatched over a glass of wine in London, where Bond Muir was retired from a career in finance, and a conversation about the lack of opportunity for women in Formula One, often viewed as the playground of billionaire men.

“They professionalized the sport for women overnight,” said W Series driver Jamie Chadwick of Britain, the 2019 champion who after six races is tied for the lead this season heading in the final weekend.

“It's giving so many more women opportunity in the sport," Chadwick said. "If you don’t understand what it stands for, you could think its a backward step. It’s really a massive step forward.”

There have been some breakthrough female stars such as American Danica Patrick in IndyCar and NASCAR, who will be part of British TV's Sky Sports broadcast team in Austin. Britain's Pippa Mann raced in IndyCar 15 times over five years. Simona de Silvestro drove this year's Indianapolis 500 for a predominantly female team.

Bond Muir said there simply haven't been enough. Formula One hasn't had a female driver in a race since 1976.

“If men and women raced against each other, you don't need a women's racing series," Muir said. “But if you looked at the numbers of women racing in single-seater series, around the world, it was going down ... Everyone said it's a great idea and needed in motor sport, but no one is going to watch it."

Bond Muir first had to raise $30 million for a series that pays all expenses for the drivers and puts them in equal cars to race for $500,000 awarded to the season champion. Then she had to convince drivers the W Series was supposed to help them, not shunt them to the sidelines of racing.

Chadwick admits she was skeptical at first. So was Sabre Cook, the only American driver in the series. Cook said meeting with Bond Muir changed her mind.

“She said, "Make no mistake, this series wasn't created to say you cannot race with the men. ... This series was created to give you more seat time, more development, so that you can go back out and kick men's (butts),'” Cook said.

Britain's Alice Powell, who had sidelined her racing career and was working with her father in construction, jumped at the chance to return.

“W Series came along and changed the game. I had just been unblocking a urinal when I got the call," Powell said.

Yet the question remains: Will the W Series really boost drivers to higher levels of racing?

Michele Mouton, the head of the FIA's Women in Motorsport Commission, said the W Series provides important visibility, but will only prove valuable if its drivers move into other series racing against men. Mouton was a top driver in her day, finishing second in the 1982 World Rally Championship.

“If not, this championship will remain, in my eyes, limited and discriminating with women only allowed to compete against each other,” Mouton said last month in a interview with French news outlet Le Figaro. “I believe that as long as they will not be confronted with the competition of the boys of their generation, it will be difficult to emerge in Formula One where it is no longer a question of being one of the best women, but one of the best drivers in the world, and for that the road is still long.”

Chadwick has signed to be development driver for F1 team Williams and hopes to someday race in F1. Cook says her ultimate dream is to race in IndyCar.

The year away from racing in 2020 gave Bond Muir time to make two moves she considers key to the success of the W Series: the geographic partnership with F1, which meant every W Series race this season was on the same tracks in front of the same crowds as the world's most popular racing series, and a push toward a full, two-car team format in 2022 that will bring in more commercial sponsors.

"As a tiny little sports brand, being on the F1 platform is fantastic,” she said, describing what she called the “halo effect" that comes with it. “When Formula One posts (on social media) about us, it can get 2 million likes. When we do it, it gets tens of thousands.”