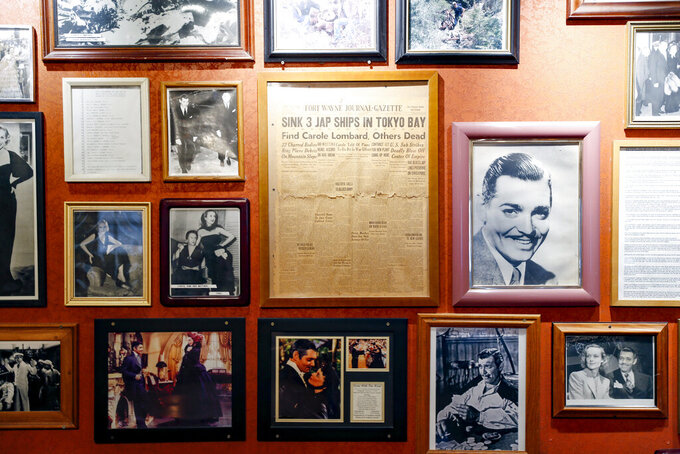 Steve Marcus, ASSOCIATED PRESS
A newspaper article, reporting on the death of actress Carole Lombard, is displayed at the Pioneer Saloon in Goodsprings, Nev. Wednesday, Oct. 13, 2021. The Pioneer, which sits on the outskirts of town, is a popular spot for motorcyclists, tourists and Las Vegas-area locals. (Steve Marcus/Las Vegas Sun via AP)

GOODSPRINGS, Nev. (AP) — With his gold and black sport coat, cowboy hat and tie featuring a silhouetted exotic dancer, Old Man Liver was in full character at this century-old saloon in the Nevada desert.

A musician, whiskey-maker and entrepreneur originally from Louisiana, Old Man Liver — his real name is Stephen Staats — is the new owner of the Pioneer Saloon in Goodsprings, a former mining town of some 250 residents about 40 minutes’ drive from the Las Vegas Strip.

The Pioneer, on the outskirts of this little town, is a popular spot for motorcyclists, tourists and Las Vegas-area locals.

A showman, Staats likes to say he won the Pioneer in a poker game. In reality, he bought it from Noel Sheckells in a $1.5 million deal that closed this summer. Sheckells owned the saloon for 15 years.

Except for an ATM and jukebox in the main barroom — there’s also a dining area and adjacent general store building — it’s not difficult to imagine the Pioneer as it was when it opened in 1913. During colder months, a wood-burning stove heats the building.

Staats told the Las Vegas Sun it’s his responsibility to keep the saloon’s history alive. Before making a play to buy the Pioneer, Staats said he had been to the saloon “a million times” as a patron.

“This place gets into your soul,” he said. “On the weekends, this entire place is full. The parking lot is full; almost every inch is taken up.”

Outside the saloon is a seating area and a small deck where bands play on Fridays, Saturdays and Sundays. There’s also a private outdoor dining area that can be rented for parties and special events like weddings.

Staats said he has plans to build a more modern stage, maybe even an amphitheater with seating nestled into the adjacent hillside.

Staats said he also planned to rebrand the adjacent Ghost Town Café as a general store. That’s what the building was used for when the Pioneer opened in the late 1800s. The store still has the original tin walls and ceiling from the period.

Today, the building serves as a gift shop, with T-shirts, shot glasses, meat seasoning mix, and products from one of Staats’ other business ventures, Vegas Voodoo, for sale. Vegas Voodoo makes voodoo dolls and other good luck charms for Las Vegas gamblers.

Staats, who has lived in Las Vegas for about eight years after two decades in Los Angeles, said he eventually would like to add a 1950s-style soda and malt counter at the general store.

“I’m thinking kids could kind of have their own space at the store with malts and candy, and the adults can have the saloon across the way,” Staats said. “We want to have that general store as an area where people can get cool, unique items that they can’t get anywhere else.”

Though he wasn’t aware of it when he purchased the Pioneer, Staats said the Ghost Town Café is featured in a video game called Fallout: NewVegas, a post-apocalyptic role-playing action game.

“We get people in here every day because of that video game,” Staats said. “We had a 21-year-old fly in from Philadelphia to celebrate his birthday here just because of the game. He said it was his dream to visit the Ghost Town Café.”

Along with its video game fame, the Pioneer has ties to classic Hollywood actors Clark Gable and Carole Lombard.

Gable waited at the saloon in January 1942 for word on his wife’s fate after a plane crash on Potosi Mountain near Las Vegas. Lombard was one of 22 people who perished in the crash.

Gable purportedly burned several holes in the cherry wood bar as he nervously chain-smoked cigarettes while waiting out the search.

A piece of the plane’s wreckage is displayed on the wall in the Pioneer’s dining room.

Also on display are framed pictures from movies and other productions that have featured the Pioneer, including “Miss Congeniality 2: Armed and Fabulous” and “Fear and Loathing in Las Vegas.”

“At the Pioneer Saloon, you never know what’s going to happen or who’s going to walk through the door,” Staats said.

Staats said people from all over the world have visited the Pioneer, but he wants to further raise its profile.

“It does bother me that not everyone in Las Vegas seems to have heard of the Pioneer,” Staats said. “My goal is to make this regionally semi-famous place into a fully world-famous place.”

Glenn Adams of Las Vegas has known about the Pioneer for years. On this day, he rode out on his Harley-Davidson motorcycle with a small group of family and friends.

“It’s a great destination, a place to get away to,” Adams said. “We come out for live music a lot. Us bikers, we love the Pioneer.”

Staats said he planned to reserve parking spots in front of the saloon for motorcycles and horses. Yes, locals sometimes ride their horses to the Pioneer, which only adds to the tavern’s Old West mystique.

“I’ve been scratched twice by ghosts,” said Kristi Cristiano, a server who has worked at the Pioneer for four years. “I was wearing jeans and cowboy boots, but I got scratched all down my leg. I don’t know how that would have happened.”

According to lore, a number of former prostitutes haunt the Pioneer from the days Goodsprings was a flourishing mining town.

Staats plans on joining them one day.

“I’ve fallen in love with this place,” he said. “My long-term goal is to hopefully be a ghost here at the Pioneer.”