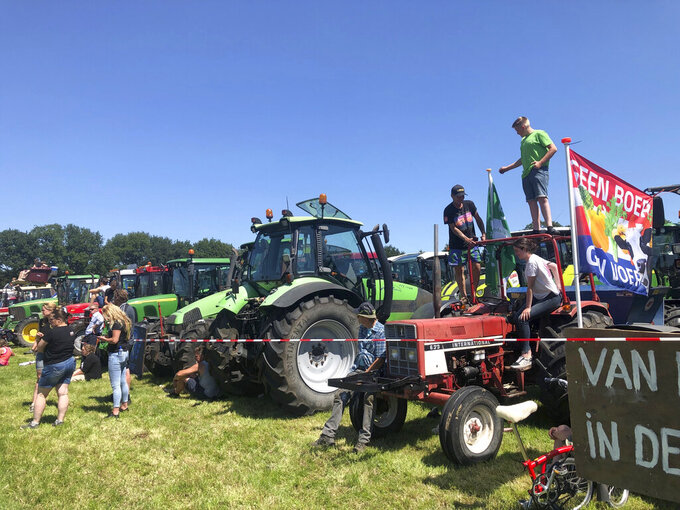 Aleksandar Furtula, ASSOCIATED PRESS
Dutch farmers protesting against the government’s plans to reduce emissions of nitrogen oxide and ammonia gather for a demonstration at Stroe, Netherlands, Wednesday, June 22, 2022. Thousands of farmers drove their tractors along roads and highways across the Netherlands, heading for a mass protest against the Dutch government’s plans to rein in emissions of nitrogen oxide and ammonia. (AP Photo/Aleksandar Furtula)

THE HAGUE, Netherlands (AP) — Farmers driving tractors blocked highways in the Netherlands on Monday and set small blazes outside at least two town halls in the latest protest sparked by a government pledge to rein in pollution emissions, a move that will hit the country's agriculture sector.

Authorities urged motorists to check traffic updates before setting off, amid the protests that follow a gathering last week of tens of thousands of farmers in the central Netherlands that also caused traffic chaos around the country.

“We advise road users to be extra alert,” the government's road and water department said in a statement. Several highways around the country were affected by the protests.

“Several highways are currently blocked by farmers. You don’t make your point by endangering road users. This can have serious consequences. Then the police have no choice but to intervene where possible, if necessary afterwards. Don’t let it get that far,” the minister tweeted.

Dutch broadcaster NOS reported that farmers lit small fires outside town halls in the city of Apeldoorn and the town of Epe in the central Netherlands.

Earlier, local broadcaster Omroep Brabant showed a truck dumping large, plastic-covered bales of hay on a highway near the town of Liessel, some 150 kilometers (93 miles) southeast of the capital, Amsterdam. On at least two more highways, farmers drove or parked their tractors, snarling traffic.

The Dutch governing coalition has mandated reductions in emissions of nitrogen oxides and ammonia of up to 70% in many areas of the country close to protected nature areas — even reaching as high as 95% in some places. The government has been forced to act after courts in recent years began blocking permits for infrastructure and housing projects because the country was missing its emissions targets.

The government has earmarked an extra 24.3 billion euros ($25.6 billion) to finance agricultural reforms that will likely make many farmers drastically reduce their number of livestock or to get rid of them altogether.