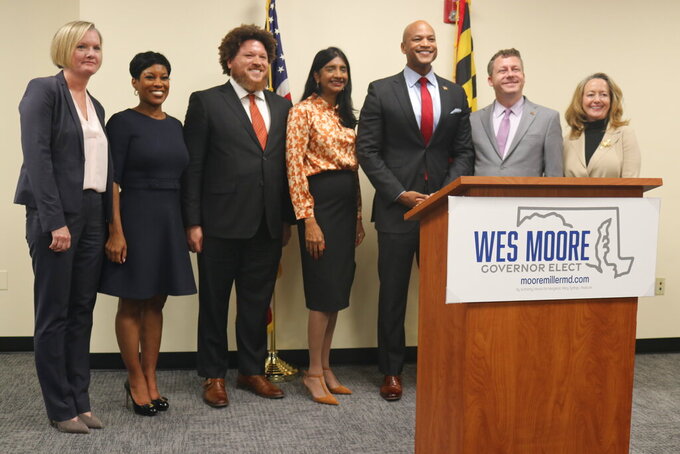 Moore, a Democrat who will be Maryland's first Black governor, said the selections reflect his commitment to building a government with innovative leaders who look like the state's diverse population.

Moore introduced Fagan Harris, who co-founded Baltimore Corps with Moore, as his chief of staff. The nonprofit organization has focused on recruiting, hiring and career advancement, including for people without college degrees, and connecting them to full-time roles in public service and entrepreneurship.

Harris serves on the Board of Directors at AmeriCorps, a post he was appointed to by President Joe Biden. Harris previously served as a director at The Aspen Institute Impact Careers Initiative, where he co-led a team of researchers to publish scholarship on talent pipelines in the public and social sectors.

“Looking ahead, our current priority is to do everything we can to execute an inclusive and effective transition that surfaces the very best ideas from every corner of our state and build an administration that reflects the diversity and dynamism of Maryland," Harris said.

Moore also announced that Montgomery County Del. Eric Luedtke, the majority leader of the Maryland House, will be his chief legislative officer, a job that advocates for the administration's priorities with the General Assembly. Moore said Luedtke has the experience to foster partnership with the legislature, which is controlled by Democrats, after eight years of a Republican administration that did not always agree with lawmakers on policy.

“We believe deeply in the idea that we want to make sure that we’re working in unison with both chambers, with both the House and the Senate, to ensure that the legislation that’s coming up and will eventually make it to our desk is legislation that we’ve already been working on together," Moore said.

Moore also announced that Helene Grady will be his budget secretary. Grady is vice president, chief financial officer, and treasurer for Johns Hopkins University. She also served as deputy director of finance for Baltimore and as Philadelphia’s deputy budget director.

Tisha Edwards will be the administration's appointments secretary. Edwards, who was chief of staff to Moore's gubernatorial campaign, has been interim CEO of the Baltimore Public School System. She also worked as executive director of the Mayor’s Office of Children & Family Success.

Amanda La Forge will be the governor-elect's chief legal counsel. She has more than 20 years of experience advising clients on election law, election administration, campaign finance, nonprofit taxation and governance, and contractual and commercial matters affecting political and advocacy organizations.