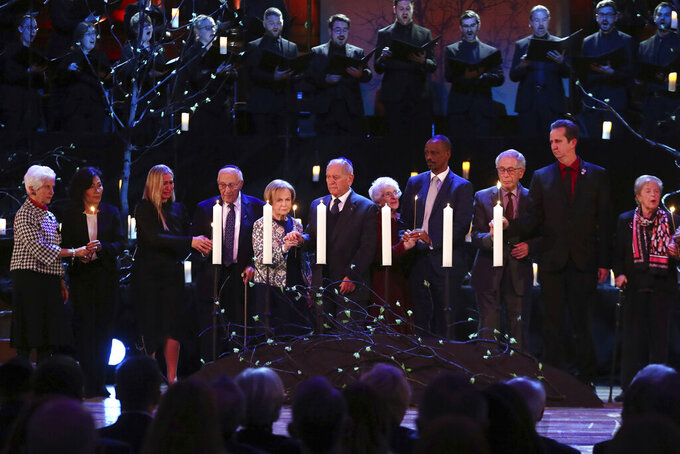 Chris Jackson, ASSOCIATED PRESS
FILE - Survivors stand on the stage during the candle lighting, during the national UK Holocaust Memorial Day Commemorative Ceremony at Central Hall Westminster in London, Monday, Jan. 27, 2020. A new survey has found what organizers say is a lack of awareness in Britain about the Holocaust and the country's rescue of Jewish children ahead of World War II. The Claims Conference said Wednesday, Nov. 10, 2021, that 52% of respondents surveyed in the U.K. did not know that 6 million Jews were murdered by the Nazis. (Chris Jackson/Pool via AP, File)

JERUSALEM (AP) — A survey released Wednesday found what organizers say is a lack of awareness in Britain about the Holocaust and a major episode in the country's rescue of Jews ahead of World War II.

The Conference on Jewish Material Claims Against Germany, a New York-based group that negotiates restitution for Holocaust victims, said that 52% of respondents surveyed in the U.K. did not know that 6 million Jews were murdered by the Nazis. Over one in five, or 22%, thought 2 million or fewer Jews were killed.

“We are very concerned to see the profound gaps in knowledge of the Holocaust in this and previous studies, including about events connected to the U.K.,” said Gideon Taylor, president of the group, which is commonly known as the Claims Conference.

He said it nonetheless was “very powerful” to see overwhelming support for Holocaust education. “Eighty-eight percent believe that it is important to continue to teach the Holocaust, in part, so it does not happen again,” he said.

The survey was released to coincide with the 83rd anniversary of Kristallnacht, or “Night of Broken Glass,” when Nazis terrorized Jews in a series of pogroms throughout Germany and Austria.

The Claims Conference has conducted similar surveys in several countries, including the U.S., France, Austria and Canada.

The figures from the U.K. appeared to be largely in line with those of the other countries. In France, some 57% of respondents did not know 6 million Jews were killed in the Holocaust, while the figure in the U.S. was 51%.

It found that 56% of respondents in Britain think something like the Holocaust could happen again. That compared with 58% in the U.S. and 45% in Austria and Canada.

Britain played a major role in the allied forces’ victory over Nazi Germany and lost some 340,000 soldiers and 70,000 civilians during the war.

Yet the survey found that respondents knew little about the U.K.'s policies toward European Jews. Some two-thirds appeared to be unaware of British restrictions on Jewish immigration during the war, and only 24% were familiar with the Kindertransport, a rescue operation that brought some 10,000 Jewish children to England before the war.

The survey interviewed 2,000 adults across the United Kingdom between Sept. 29 and Oct. 17 and had a margin of error of 2 percentage points.