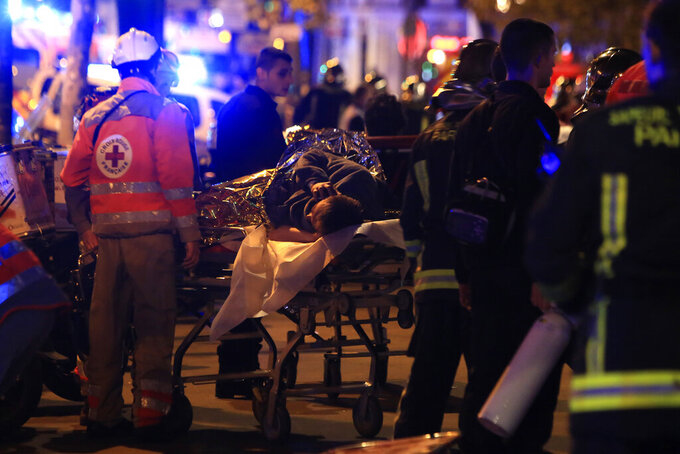 Thibault Camus, ASSOCIATED PRESS
FILE - In this Nov;13, 2015 file photo, a person is being evacuated after a shooting, outside the Bataclan theater in Paris. France is putting on trial 20 men accused in the Nov. 13, 2015, Islamic State terror attacks on Paris that left 130 people dead and hundreds injured. (AP Photo/Thibault Camus, File)

PARIS (AP) — For the music lover, it was nearly three hours at gunpoint, wondering if he would become yet another body on the floor of the Bataclan concert hall in Paris.

For the grieving mother, the night of carnage robbed her of her son and tarnished her view of the vibrant neighborhood they both loved.

For the French president, a celebration of the national soccer team transformed into sleepless days of facing down a shocking extremist attack.

The survivors of the Islamic State group attack on Paris the night of Nov. 13, 2015, and those who mourn the 130 dead, are bracing for the long-awaited trial and hoping for justice.

It begins Wednesday in a secure modern complex embedded in Paris’ original 13th-century courthouse. The main chamber and 12 overflow rooms can accommodate 1,800 victims, 330 lawyers and 141 accredited journalists for the nine-month trial.

Twenty men are going on trial, six of them in absentia. All but one of the absent men are presumed dead in Syria or Iraq. Most are accused of helping create false identities, transporting the attackers back to Europe from Syria, providing them with money and phones, and supplying explosives and weapons.

The attacks sent France into a state of emergency. For Stéphane Toutlouyan and the others held hostage inside the Bataclan, the transformation was intensely personal.

"The reaction to this, afterwards, was to try and take back control of our lives and do the things that maybe we’d not done before, because we had no time to lose,” he told The Associated Press.

On that fateful Nov. 13, a cell of nine IS supporters armed with automatic rifles and explosive vests struck across French capital. Nearly all were from France or Belgium, as were the cell’s 10th member and sole survivor, Salah Abdeslam.

Abdeslam, who ditched his car and malfunctioning explosives vest, is the only defendant facing murder charges in the trial. Another key defendant, Mohammed Abrini, reappeared months later in footage of the IS attack on the Brussels airport and subway.

Many of the dead attackers, along with Abdesalam and Abrini, were childhood friends from the Brussels neighborhood of Molenbeek. Some joined the Islamic State group in Iraq and Syria, including the Paris attack ringleader, Abdelhamid Abaaoud. Driving three rental cars, they took their “convoy of death” to the highway linking Brussels and Paris on Nov. 12, 2015, and scattered in reserved hotel rooms.

The next day, the German and French soccer teams faced off at the Stade de France, the country's national stadium just outside Paris.

It was a balmy Friday evening, and the city’s bars and restaurants were packed. Victor Muñoz, a 25-year-old native of Paris’ 11th arrondissement, was with old friends. At the nearby Bataclan concert venue, the American band Eagles of Death Metal were playing to a full house, including Toutlouyan, an enthusiastic fan of live rock.

The sound of the first suicide bombing at 9:16 p.m. barely carried over the noise of the stadium's crowd. The second came four minutes later. French President François Hollande, at the soccer game with Germany's foreign minister, was told about the dead bombers outside.

“I stayed in my place for a few minutes to avoid a panic effect. People see me from their seats, and they can’t make the link between the detonations and my departure, or there's the risk of stampede,” Hollande told Le Parisien newspaper this month.

By then, a squad of gunmen including Abdeslam’s brother and Abaaoud had opened fire at La Bonne Bière and other bars and restaurants in the neighborhood. Muñoz was among those hit, and as he lay dying a friend called his mother to tell her she needed to come immediately. By the time Dominique Kielemoes arrived, a few minutes later, ambulances were taking away the injured and the dead who were covered with blankets. She did not spot her younger son.

That bloodshed outside came to an end at 9:41 p.m. at the Café Voltaire when Brahim Abdeslam detonated his explosives. The other two attackers fled.

Worse was to follow. At 9:47 p.m., three more gunmen burst into the Bataclan, firing indiscriminately. Ninety people died within minutes. The gunmen singled out a dozen people, including Toutlouyan. To this day, he doesn't know why they were spared.

“We stood behind a window for 2½ hours, watching what was going on, all the while wondering whether they would shoot us in five minutes, in two hours or in two days. At that moment, and for 2½ hours, we weren’t the masters of our own lives,” he said.

Their instructions: To report on the locations of police, then to act as go-betweens during sporadic negotiations. Shortly after midnight, Hollande gave the order to move in. Two of the gunmen blew themselves up; the third was shot by police.

Now there are questions that only the men on the stand can answer.

Abdeslam’s decision to abandon the Renault Clio in northern Paris and call Brussels for help is a puzzle. Two friends drove through the night to fetch him, and on the road back to Belgium he slipped through three police checkpoints.

Abdeslam was finally arrested in his Brussels neighborhood of Molenbeek in March, days before the IS network attacked the Brussels airport and subway, killing 32 more people.

Abrini’s role is murky as well. He spent a night with the IS attackers, but left Paris on Nov. 12, hiring a driver to take him three hours back to Brussels because he had missed the last train. He popped up again in Brussels months later, accompanying two suicide bombers to the airport but walked away as the bloodshed started.

Two of the defendants are charged with plotting a simultaneous attack at Amsterdam’s Schiphol Airport in 2015 and went to the airport on Nov. 13, but returned to Brussels for unknown reasons. Abdeslam’s car idled for a while that day at Paris’ Charles de Gaulle Airport as well.

The day after the murderous evening, a Frenchman in Syria claimed responsibility for the attacks in the name of IS.

All that day and the next, Muñoz's parents searched hospitals for him. They finally found him at the morgue.

“They let us see him but we couldn’t touch him. We were given 5 minutes. He was behind a window. You can imagine the kind of pain that we felt. From then on, my husband and I, we were in a daze. We just let events carry us along,” said Kielemoes.

Abaaoud and another attacker died before dawn Nov. 18 in a police raid.

Abdeslam refused to speak to investigators or his lawyers in Belgium. But he did request a young attorney in France known for her eloquence, Olivia Ronen. She will be his primary lawyer.

For many victims, speaking out is the point. A month is dedicated to their testimonies.

“It’s really the participation that is important for them,” said Jeanne Sulzer, a lawyer representing 10 victims. "What they’re seeking is the establishment of truth, justice.”

Alex Turnbull contributed to this report.