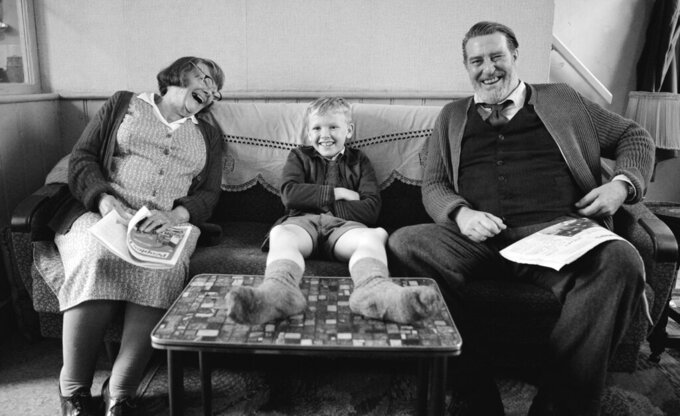 “He said, ‘Will you play my grandmother?’” Dench recalls. “And I said yes.”

In “Belfast,” Branagh reconstructs a poignant and pivotal moment from his childhood. The film, which Branagh wrote and directed, is set in the North Ireland capital in 1969, during the sectarian strife of the Troubles.

In Branagh’s film, a black-and-white, heartfelt memory piece told largely from the perspective of the filmmaker as a boy, the tension outside on the streets weighs on a young family. The semi-autobiographical “Belfast” is set in a very specific time and place, but it’s rich in the universal struggles and bonds of family.

And while “Belfast” is grounded first and foremost in Caitríona Balfe’s mother, Jamie Dornan’s father and their youngest son, Buddy (Jude Hill), the film's most soulful evocations of family come from the grandparents. In scenes warm with reflection, wisdom and humor, Dench and Ciarán Hinds play Granny and Pop, the heartbeat of “Belfast.”

“If the body of the story is the parents and the kid, they came from somewhere,” says Hinds. “If you look back and see where it all started, they came from these two extraordinary and honest characters in Pop and Granny.”

“Belfast,” which Focus Features released in theaters Friday, has already emerged as a crowd-pleasing Academy Awards front-runner. In September, it won the audience award at the Toronto International Film Festival. And while the love is already being spread around to Branagh’s cast, the film, perhaps, glows brightest when Dench and Hinds are on screen.

“With both of those people there is what you might call a touch of the poet. They go deep very quickly and effortlessly. It’s not flimflam,” says Branagh. “They have a kind of empathy and a rapport. They look out at the world. As Shakespeare put it in one of his plays, ‘They have bought their experience.’”

Dench, 86, and Hinds, 68, aren’t contemporaries or countrymen. Dench, one of the few stars of “Belfast” who isn’t Irish, is a Brit from York (though her mother was from Dublin). The Belfast-born Hinds grew up just blocks away from where Branagh lived as a child.

But they are both well-traveled, intensely devoted actors of stage and screen whose maturity lends an extra depth to “Belfast.” In the film, they have luminous moments together, like when Pop, recalling falling in love with 50 years ago, gently dances with Granny.

“We were going to go full-on there and end up in the tango, but Ken wasn’t having any of it,” says Hinds.

Dench connects particularly with the multi-generational vision of community in “Belfast.” It makes her recall a period in her life with her husband Michael Williams, who died in 2001, when Williams’ parents moved in with them and their daughter Finty into a small house outside Stratford.

“My idea of family life was always to have a community where we were all together,” says Dench. “Of course, different ages of people have different views about things. It’s a kind of a learning curve for everybody, too. Older people understanding about young people, and young hopefully understanding older people. Of course, it can clash and go wrong. But it’s good to try it out.”

Hinds drew particularly from his father, and found both Pop and Granny instantly recognizable. As played by Hinds, Pop is both sage and mischievous. In one of Buddy's visits he instructs: “Be good. And if you can't be good, be careful.”

“It was interesting to be asked knowing that you weren’t going to be not exactly representing the writer’s family but the soul of that generation. Somewhere deep in my psyche I felt they were a part of my own DNA,” says Hinds. “This role came onto to me like the old cardigan I wore in the film.”

“Belfast” is filled with movies -- an escape from the conditions of the day and hints of Branagh’s own filmmaking future. The family, rapt, watches “Chitty Chitty Bang Bang” in a theater. In a quieter moment, Dench’s character speaks lovingly of seeing Frank Capra's “Lost Horizon" (1937) and reaching for Shangri-La. Dench’s own transformative experience as a child, though, wasn’t at the movies. Laughing, she recalls her weepy reactions to Disney films like “Snow White” and “Bambi.”

“I just remember being in a veil of tears as a child. Then I never got to see things like ‘Chitty Chitty Bang Bang’ because I thought the cinema sets out to just make you cry. Which it does, of course,” says Dench. “I saw Shakespeare when I was very little, my brothers at school. It was Macbeth. When my eldest brother came on and said, ‘What bloody man is that?’ I thought: This is for me! If this is Shakespeare, it has swearing as well!”

Dench proudly boasts that she could, at any moment, do an hour and a quarter of Shakespeare “and not draw breath.” “I could do the whole of ‘Twelfth Night’ and of ‘(Midsummer Night’s) Dream’ and some other things,” says Dench.

For years, Dench has kept acting despite a degenerative eye condition that forces her to have her scripts read to her. She says she gladly accepts every role offered to her, so one of the hardest parts of the early pandemic lockdown was not working.

“I thought: I know what I’ll do. I’ll learn all the sonnets,” Dench says of her pandemic goals. “Well, of course, have I? No."

Shot in September 2020, "Belfast” was among the first films back to production in the U.K., and Dench was plenty eager to be back on set. “Just being together with other actors,” she says, “it was a really important time.”

For Hinds, the film has put an unfamiliar spotlight on him. While a widely respected actor with decades of credits from Julius Caesar in HBO’s “Rome” to Conor McPherson's plays (and the playwright’s underrated 2009 film “The Eclipse,” in which Hinds played a grieving widower), Hinds has never before been in the Oscar conversation.

“It’s very strange in a way because it’s not really been a part of my life,” says Hinds. “I go to work.”

The memories dredged up by “Belfast” have affected both Hinds and Dench in different ways. At the film’s London Film Festival premiere, Dench brought her grandson. He, like she did at “Bambi” years ago, teared up.

Dench looks down at the tattoo she had put on her wrist at 81. “Carpe diem,” it reads. The tattoo, she notes, “could use a friend.” But she's also begun to regard the one she has a little differently.

“People say it’s ‘Seize the day,' but in actual fact, I heard on the radio completely by chance about six weeks ago that the actual, literal translation is ‘Savor the Day,'" says Dench. "Don’t you think that’s nicer? I think ‘Savor the day’ is lovely.”