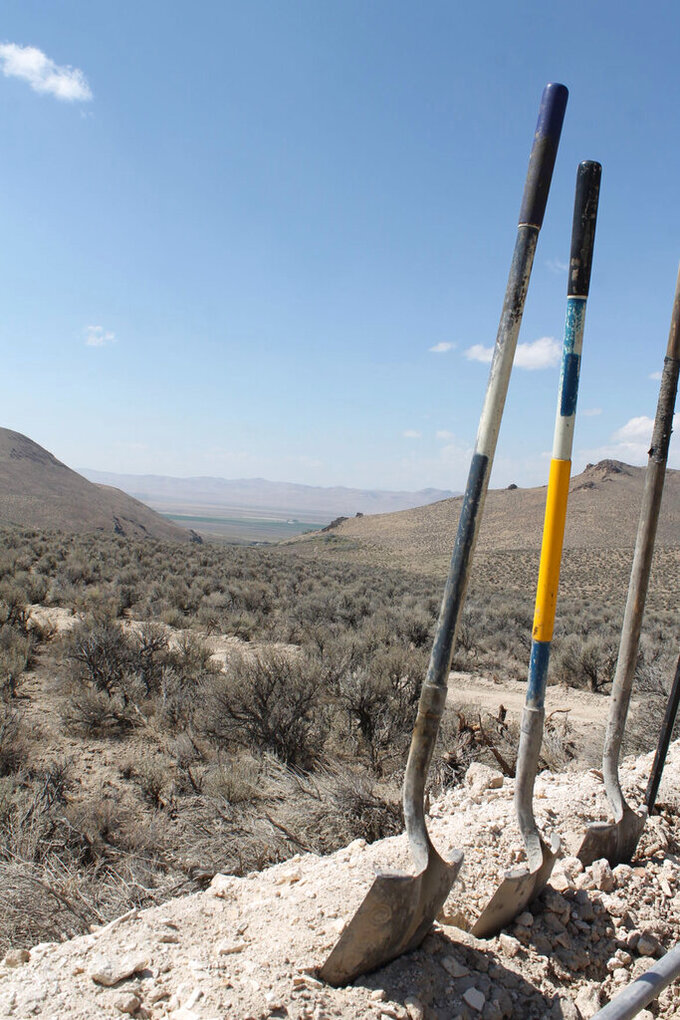 Suzanne Featherston, ASSOCIATED PRESS
Permitting Lithium Nevada Corp.'s Thacker Pass Project has begun as exploration drilling continues on the site between Orovada and Kings Valley, in in Humboldt county, Nev., shown beyond a driller's shovels in the distance on Sept. 13, 2018. A new federal lawsuit is challenging the construction of a huge Nevada lithium mine approved in the final days of the Trump administration. It says the U.S. Environmental Protection Agency and state wildlife officials repeatedly warned the plans don't comply with laws protecting water and wildlife near the Oregon line. (Suzanne Featherston/The Daily Free Press via AP)

RENO, Nev. (AP) — Another federal lawsuit challenging the construction of a huge Nevada lithium mine approved in the final days of the Trump administration says the U.S. Environmental Protection Agency and state wildlife officials repeatedly warned the plans don’t comply with laws protecting water and wildlife near the Oregon line.

The U.S. Bureau of Land Management itself acknowledged that when it approved Nevada Lithium Corp.’s Thacker Pass mine on Jan. 15, it didn’t conform with the bureau’s visual-resource protection requirements, according to the lawsuit filed last week in U.S. District Court in Reno.

Four conservation groups want a judge to void the expedited review of the mine under a series of Trump administration executive orders streamlining environmental regulations, especially for critical elements including lithium — a key component in electric car batteries.

“In the rush to implement the project,” the lawsuit said the agency “swept under the rug the mine’s serious environmental impacts.”

Some of the region's most essential and irreplaceable sage grouse habitat could be lost if the mine is built, the suit claims. It says the bureau erroneously concludes no federally protected Lahontan cutthroat trout exist in the streams that will be affected and dismisses potential harm to golden eagles and destruction of pronghorn antelope habitat.

“The generalized discussion of these impacts gives short shrift to potentially catastrophic impacts to the region’s protected, sensitive, and vulnerable species,” the suit states. “In many cases, the biological information ... is so vague as to render the analysis and any proposed mitigation meaningless.”

A longtime Nevada rancher filed suit last month to block mining on federal land above an extinct volcano formed millions of years ago located 25 miles (40 kilometers) from the Nevada-Oregon line.

The new lawsuit cites detailed objections raised by U.S. and state regulators in correspondence and comments submitted to land managers. It was filed Feb. 26 by the Western Watersheds Project, the Great Basin Research Watch, Basin and Range Watch and Wildlands Defense.

“We continue to find that the preferred alternative will likely result in adverse impacts to wildlife, ground and surface waters, and riparian vegetation within and outside the project area,” the Nevada Department of Wildlife wrote to the bureau on Jan. 4.

It was “based on nearly 10 years of baseline environmental studies that were conducted through strict adherence to state and federal standards and with many years of extensive coordination and consultation with local stakeholders,” he said in an emailed statement.

The lithium deposit is believed to be one of the U.S.' largest. The mine is projected to produce 1,000 jobs in construction and 300 permanent jobs, generating $75 million in state and local tax revenue over a decade.

President Joe Biden has revoked some of the Trump administration’s executive orders and put the brakes on a copper mine in Arizona but has prioritized lithium production as part of its determination to move from fossil fuels to renewable energy.

The lawsuit cites EPA warnings that a plume of contaminated water exceeding Nevada pollution standards could extend a mile from the pit 300 years after it is closed.

The EPA predicts toxic water will seep from the tailings waste facility with high levels of uranium, mercury, arsenic and more than a dozen other contaminants. The lawsuit cites the agency's complaints that the bureau failed to analyze in any detail how the drainage will be treated and managed or for how long.

“Without detailed information about mitigation and its efficacy, it is unclear how a Record of Decision could state that all practicable means to avoid or minimize environmental harm from the alternative selected have been adopted,” the EPA said.

The EPA acknowledged that after the National Environmental Protection Act public review process ended, Lithium Nevada submitted a new mitigation plan Dec. 16 that it maintains could substantially decrease long-term impacts. But that option wasn’t discussed in previous environmental reviews and isn't currently a condition of approval.

The lawsuit said air pollution concerns center on Lithium Nevada's claim that sulfur dioxide emissions will be five-to-10 times lower than current state-of-the-art industry standards, or the “cleanest in the world."

But the company didn’t provide any evidence supporting those “bold assumptions” and the bureau failed to explain how their effectiveness can be determined from so little information, the lawsuit said.

“Neither BLM nor the public has any assurance that the technology actually exists."