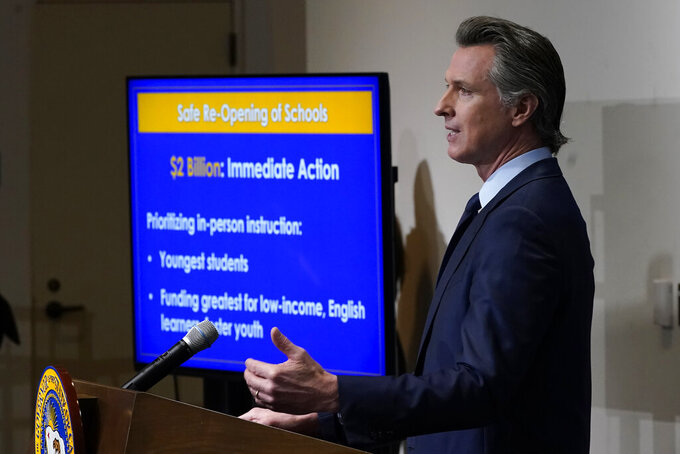 Rich Pedroncelli, ASSOCIATED PRESS
FILE - California Gov. Gavin Newsom speaks about his 2021-2022 state budget proposal during a news conference in Sacramento, Calif., on Jan. 8, 2021. California will have a $31 billion budget surplus next year as revenues continue to climb despite the pandemic, according to a new forecast from the state's independent Legislative Analyst's Office. (AP Photo/Rich Pedroncelli, Pool, File)

SACRAMENTO, Calif. (AP) — California is on track to have so much money that state officials will likely have to give even more of it back to taxpayers to meet constitutional limits on state spending, according to a new forecast from the state's independent Legislative Analyst's Office.

The state's annual “Fiscal Outlook,” released Wednesday, predicts a $31 billion surplus for the 2022 budget year that begins July 1. The analyst's office says state is on pace to have so much money that it could exceed a constitutional limit on state spending by $26 billion over three years. That could require Gov. Gavin Newsom and state lawmakers to either cut taxes, spend more money on infrastructure or — perhaps the most popular choice in an election year — give rebates to taxpayers and spend more on public schools.

“We think it will ... turn out to be a pretty significant issue for the Legislature to consider in this coming budget process,” Legislative Analyst Gabe Petek said.

Newsom won't reveal his budget proposal until January. But on Wednesday, the governor indicated his favored giving some of the money back to taxpayers. That's what he and the state Legislature did earlier this year, approving rebates totaling $12 billion for some taxpayers in a state budget that was also projected to exceed the spending limit.

“How we framed that historic surplus last year, similarly, we will frame our approach this year,” Newsom said during a news conference at the Port of Long Beach. “I'm very proud of the historic tax rebate last year, and I look forward to making the decision that I think is in the best interests of 40 million Californians.”

California's tax collections have continued to soar despite the pandemic. From April through June of this year, California businesses reported a record high $216.8 billion in taxable sales — a 38.8% increase over the same period in 2020 and a 17.4% increase over those months in pre-pandemic 2019. Nick Maduros, director of the California Department of Tax and Fee Administration, said it is “a sign that business owners found creative ways to adapt during a difficult year."

But the LAO said it’s impossible to know whether these gains are sustainable. Prices for goods and services are going up because of inflation. In October, the nationwide growth in retail sales of 1.7% was mostly because prices rose 0.9% during that same time period, according to new data from the U.S. Census Bureau. Gas prices grew even faster.

While most of the state's wealthier workers kept their jobs and kept paying taxes during the pandemic, the state's lower-wage workers were hit hard by government-ordered closures of restaurants and other public spaces. More than 18 months into the pandemic, California is tied for the highest unemployment rate in the nation at 7.5%.

“There’s something wrong when the state is flush with extra cash — $750 for every man, woman and child — while ordinary people have to choose between putting food on the table and filling their gas tank,” Assembly Republican Leader Marie Waldron said.

California's “budget year” runs from July 1 to June 30. During the first three months of this budget year, California tax collections are more than $10 billion ahead of projections. The LAO predicts that by June 2022, California will have collected $28 billion more in taxes and transfers than officials had expected.

This means there will likely be a significant increase in spending on public schools. The state Constitution requires lawmakers to spend about 40% of state tax collections on public education each year. The LAO said Wednesday that means public schools and community colleges could see an $11 billion increase.

“California’s strong fiscal health is not an accident. It is the direct result of a decade of responsible budgeting by Democratic legislators and governors that enabled the state to survive the pandemic downturn,” said state Senate President Pro Tempore Toni Atkins, a Democrat from San Diego.

Despite California's wealth, Atkins said “too many families struggle just to get by.” She said the Legislature will “work to craft transformative priorities that put California's wealth to work building a more equitable economy and a stronger middle class.”

Newsom said Wednesday he'd like to put most of the surplus either in the state's savings account or spend it on one-time items that don't require ongoing funding “so that we're not caught flat-footed when the economy contracts, when the markets begin to adjust.”

“We are going to substantially increase our one-time investments in infrastructure,” Newsom said. “That's one (budget) preview you can count on.”

The Legislative Analyst's Office says most economic forecasters predict inflation will slow down by next year but conceded that prediction “comes with significant uncertainty.” While the LAO is predicting a $31 billion surplus, it could be as low as $10 billion or as high as $60 billion depending on how much money the state collects from taxes.

If the numbers hold, the LAO says California could have as much as $21 billion in its main savings account, or about 10% of all general fund revenues and transfers.