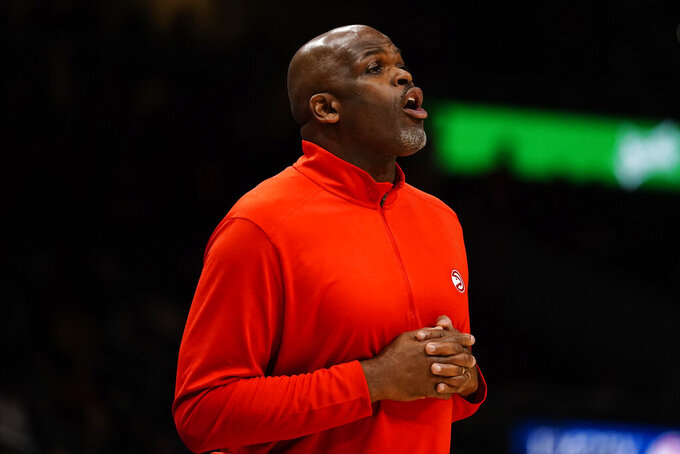 ATLANTA (AP) — The expectations have certainly changed in Atlanta.

Long an NBA backwater, the city has embraced a Hawks team with championship aspirations after a stunning run to the Eastern Conference final last season.

“We obviously want to be very competitive and build off last year,” said general manager Travis Schlenk, who has skillfully rebuilt the roster through the draft, free agency and trades. “We want to go out there and make some noise like we did last year.”

Led by budding star Trae Young, the Hawks made the playoffs for the first time since 2017.

They didn't stop there. After knocking off the New York Knicks in the opening round, the Hawks upset the top-seeded Philadelphia 76ers in seven games and took the eventual NBA champion Milwaukee Bucks to six games in the conference final before the season finally ended.

Despite their unexpected success and the return of virtually the entire roster, the Hawks are hardly viewed as a championship contender at the national level.

Some perceptions take longer to shake.

“There was a lot of chatter in the offseason, but not a lot about us,” Young said. “We're eager to go out there, have some fun and try to shock the world again. The next step is winning a championship.”

Young is confident that the Hawks are on the right track.

“It's not gonna happen overnight. It's gonna take work. We know that,” he said. “But if we keep doing what we're doing, get better, just a little bit better, each and every one of us, it will take us there.”

The Hawks struggled through the first half of last season, but totally turned things around after coach Lloyd Pierce was replaced by Nate McMillan.

McMillan's brought a level of confidence and defensive toughness that improved the team's performance in close games.

After posting a 14-20 mark under Pierce, the Hawks were 27-11 with McMillan running things. He served out the season as an interim coach, but Atlanta quickly locked him up with a multi-year deal shortly after the loss to the Bucks.

“We have the potential to do something special,” McMillan said.

The Hawks have one element that seems to mark all great teams: a charismatic leader who embraces the role of superstar.

Heading into his fourth season, Young agreed to five-year maximum extension worth up to $207 million.

He showed in the playoffs how much he relishes being the face of the franchise, especially in the playoff victory over the Knicks, when the wrath of the New York fans only seemed to make him play better.

Young still carries a hefty chip on his shoulder, too, believing he still doesn't get the respect he deserves. For example, he was noticeably perturbed when he didn't get picked for the All-Star Game in his own city last season.

“I definitely don't see us getting the respect I feel like we deserve from what we showed last year,” Young said.

The Hawks may have trouble finding enough playing time for one of the league's deepest rosters.

The Hawks easily go 12 or 13 deep, with players such as Cam Reddish, Danilo Gallinari, Kevin Huerter and Lou Williams able to provide starter-like production off the bench.

“They will all have to sacrifice more this season with the number of guys we have coming back,” McMillan said.

While the Hawks retained all their key players, they've added some new faces to the mix.

Most notably, Delon Wright is expected to be the backup point guard behind Young, while Gorgui Dieng provides depth at center as second-year player Onyeka Okongwu recovers from shoulder surgery.

Also, keep an eye on first-round pick Jalen Johnson. He could be a draft-day steal with the Hawks selecting him at No. 20.

The only major injury the Hawks will be dealing with at the start of the season is Onyeka's recovery from surgery to repair a torn right labrum in his shoulder.

The Hawks are hoping to have Onyeka back in January, but the youngster is projecting an earlier return. He's shooting to be back on the court by his 21st birthday, which is Dec. 11.

Okongwu said his shoulder “is really doing well” and he believes a December return is “very realistic.”