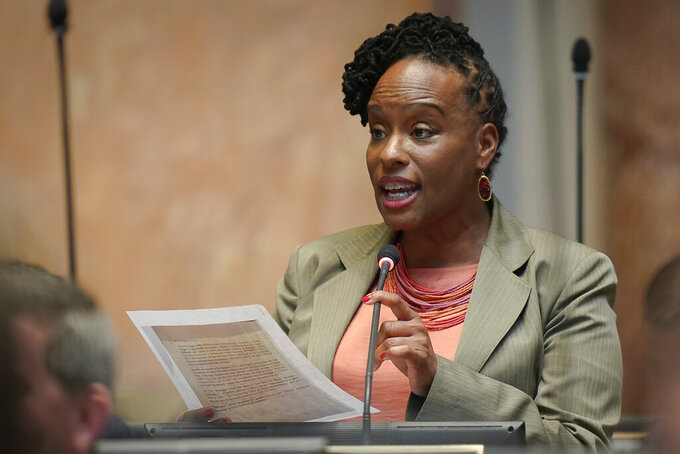 Bryan Woolston, ASSOCIATED PRESS
FILE - In this March 2, 2020, file photo, state Rep. Attica Scott, D-Louisville, speaks on the floor of the House of Representatives at the Capitol in Frankfort, Ky. Kentucky State Rep. Attica Scott, one of two Black women in the state legislature, has announced plans to try to unseat longtime Democratic Congressman John Yarmuth in the state’s only congressional seat controlled by Democrats. In a video announcing her candidacy released Wednesday morning, July 7, 2021, Scott referenced her background as community organizer and activist, declaring that Kentucky's largest city needs “a leader who sees this glaring inequality has the empathy to understand it, and the resolve to address it.” (AP Photo/Bryan Woolston, File)

Yarmuth is currently in his eighth term, and occupies an influential post as chairman of the House Budget Committee. He was a sponsor of the American Rescue Plan Act, which brought millions in federal coronavirus relief to the state.

Scott, a community organizer and former Louisville city councilwoman, handily defeated a more conservative Democratic incumbent in 2017. She has more in common with Yarmuth, who was first elected in 2007 and is an outspoken progressive. Both have expressed support for a ‘Medicare for All’ system, raising the minimum wage to $15 an hour and decriminalizing marijuana.

In a campaign video released Wednesday morning, Scott referenced her background as a community organizer and activist, declaring that Kentucky's largest city needs “a leader who sees this glaring inequality, has the empathy to understand it and the resolve to address it.”

In the General Assembly's 2021 session, Scott authored a bill she called “Breonna’s Law," which sought to ban no-knock search warrants in Kentucky and impose new requirements on police practices.

The effort honored Breonna Taylor, a 26-year-old emergency medical worker and Louisville native who was fatally during a botched raid on her home by Louisville police officers in March 2020. While the measure eventually signed into law was not the total ban Scott had sought, it included elements inspired by her legislation.

Scott has introduced other measures that would remove the remove the tax on certain baby products, and protect people who wear certain hairstyles from discrimination by employers or schools.

Hudspeth Blackburn is a corps member for the Associated Press/Report for America Statehouse News Initiative. Report for America is a nonprofit national service program that places journalists in local newsrooms to report on undercovered issues.