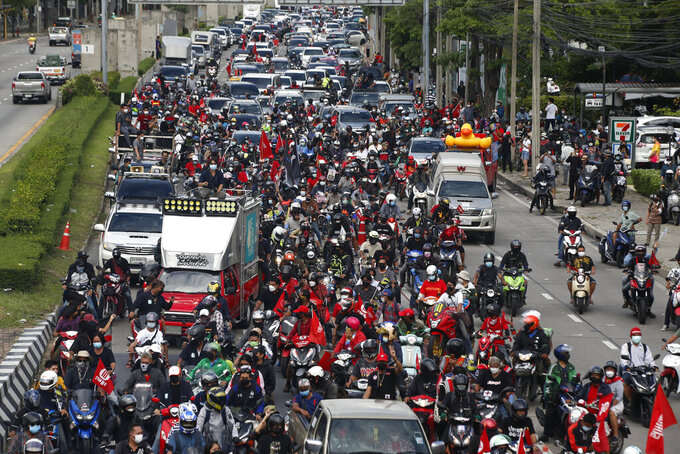 Anuthep Cheysakron, ASSOCIATED PRESS
Anti-government protesters block the road with cars and motorcycles as a part of their "car mob" demonstrations along several roads in Bangkok, Thailand, Sunday, Aug. 29, 2021. A long line of cars, trucks and motorbikes wended its way Sunday through the Thai capital Bangkok in a mobile protest against the government of Prime Minister Prayuth Chan-ocha. The protesters on wheels hope their nonviolent action, dubbed a "car mob," can help force the ouster of Prayuth, whom they accuse of botching the campaign against the coronavirus. (AP Photo/Anuthep Cheysakron)

BANGKOK (AP) — A long line of cars, trucks and motorbikes wended its way Sunday through the Thai capital Bangkok in a mobile protest against the government of Prime Minister Prayuth Chan-ocha. The protesters on wheels hope their nonviolent action, dubbed a “car mob,” can help force the ouster of Prayuth, whom they accuse of botching the campaign against the coronavirus.

“There is only one message from this car mob, which is ‘Prayuth get out!‘” Sombat Boonngamanong, a veteran social activist who helped originate such protests in July, said ahead of the protest. “He has had a chance to run the country for seven years. He has proved that he is incapable of being the country’s leader, so we cannot let him continue.”

The car mob tactic has visibly been attracting more and more participants, although its mobile nature makes it hard to estimate its size. Some onlookers along the route displayed supportive banners and flashed the opposition’s three-finger salute as the lengthy parade of vehicles passed.

Prayuth initially took power in 2014, when as army commander he launched a successful coup against an elected government. He continued to hold power when he was named prime minister as head of a coalition government after a 2019 general election.

Organizers say the protest on wheels evades legal limitations on gatherings that are aimed at enforcing social distancing in order to fight the spread of the coronavirus. Keeping things moving also makes it more difficult for police to box demonstrators in, and lowers the possibility of violent clashes, they believe.

“They impose the law to prevent the spreading of COVID-19, while a car mob is designed with the same concept,” said Sombat. “If we use a bus, that can violate the law. But we use our own cars, each of which carries fewer than five people. So how could that break the law?”

Prayuth has shown his concern about the safety of both protesters and the authorities, as each protest could become a new COVID-19 cluster, government spokesman Thanakorn Wangboonkongchana said last week.

Large-scale protests against Prayuth’s government began last year, with three core demands: the resignation of Prayuth and his government, amending the constitution to make it more democratic and reforming the monarchy to make it more accountable.

But last year’s protest movement lost steam due to leaders’ arrests, COVID-19 concerns and restrictions as well as controversy over its critical view of the monarchy, an institution fiercely guarded by the country’s ruling elite, including the military.

Prayuth’s unpopularity increased this year over what was perceived to be his mishandling of the coronavirus crisis. Thailand managed to keep the virus in check for most of last year, but the government failed to secure timely and adequate supplies of COVID-19 vaccines.

The misstep became glaring when the third wave of the coronavirus arrived in April with the delta variant, and daily cases and deaths shot up to record highs. Thailand has had 1,174,091 confirmed cases and 11,143 deaths since the pandemic. Around 97.5% of total cases and 99% of total deaths have been during the third wave.

The protests are loosely coordinated with action in Parliament against Prayuth and five of his Cabinet members.

A second no-confidence motion this year against the government will be debated this week, focusing on this COVID-19 issue.

“I don’t know if we will finally be able to oust Prayuth with this protest. But what I can guarantee is that it will create a big stir among Prayuth and the government’s coalition parties,” said Sombat, the activist. “If the coalition parties don’t vote against Prayuth on the no-confidence motion, they will surely face difficulties in the next election.”

Organizers of the car mob, which is not the only anti-government protest movement but appears to be the one with the broadest support, say they will stop the car mob tactic but carry on with a bigger protest on Thursday during Parliament's no-confidence debate.