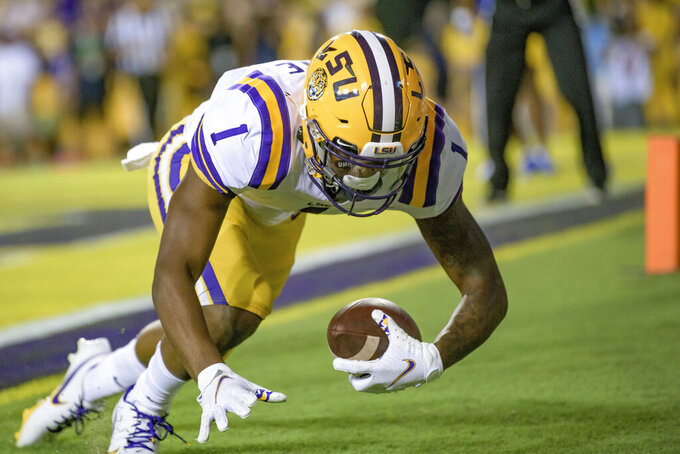 Top LSU receiver Kayshon Boutte, whose nine touchdown catches tie him for most in the nation, will miss the rest of the season, coach Ed Orgeron said Monday.

Boutte absence comes at an inopportune time for LSU (3-3), which has lost two straight and has several challenging conference games coming up, beginning Saturday night against No. 20 Florida at Tiger Stadium in Baton Rouge, Louisiana.

It's also bad timing for Orgeron, who finds himself increasingly immersed in speculation about his job status as losses mount.

“Nobody’s told me about my job status,” said Orgeron, a south Louisiana native who has referred to coaching LSU as his dream job. “As far as I know I’m the head coach of the LSU Tigers and that’s all the matters.

“The best thing for me to do is be very positive,” Orgeron continued. “I will say this, and I will say it again: No one has to tell me about the LSU expectations. I know them. I was born with them. So I understand."

Boutte left the field on a cart with an apparent lower leg injury during LSU's 42-21 loss at Kentucky on Saturday night.

Before his injury, he had 38 catches or 509 yards to go with his exceptional touchdown total. His departure takes away a trusted and productive target for first-year starting quarterback Max Johnson, who's been rushed to read defenses and deliver the ball behind an offensive line that has struggled with pass protection.

However, defensive tackle Glenn Logan would be back, Orgeron said, adding that LSU could move freshman standout defensive lineman Maason Smith from the interior to the edge if needed in Gaye’s absence.

The roster news largely bodes ill for the embattled Orgeron, whose Tigers have gone 8-8 since their 2019 unbeaten national title campaign. And they are in the midst of a gauntlet of games against ranked conference foes. After hosting the Gators, LSU visits to No. 13 Mississippi on Oct. 23 and No. 5 Alabama on Nov. 6 before returning home against No. 17 Arkansas on Nov. 13.

Orgeron said he had no intention to discuss his job status with his players this week.

“I understand this is not the LSU standard of performance. I understand my job. I get it totally,” Orgeron said. "I know exactly where I'm at. And I'm going to go to work today and don't blink. I promise you. I will not blink — for anyone.”