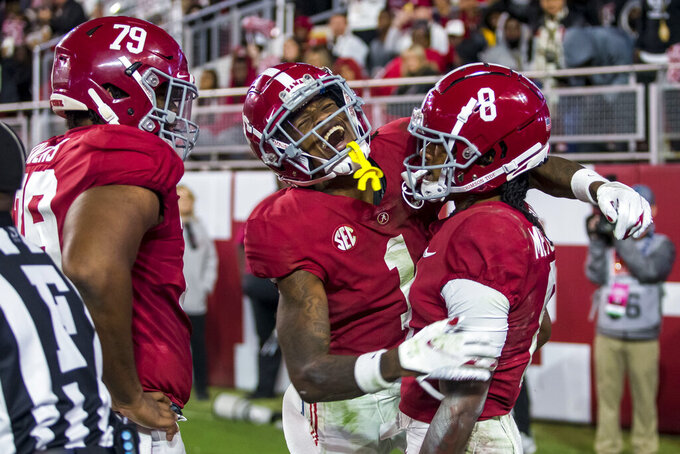 Cincinnati held on to the No. 2 ranking by just four points over No. 3 Alabama in The Associated Press college football poll Sunday, and Oregon slipped past Ohio State to move up to No. 5.

Georgia is a unanimous No. 1 for the fifth straight week in the Top 25 presented by Regions Bank. The teams closest to the Bulldogs are more tightly packed after another weekend of upsets and close calls.

Cincinnati has been ranked No. 2, best in school history, for four straight weeks.

Oklahoma, which had an open date this past weekend, stayed at No. 4.

The Buckeyes won 26-17 at Nebraska. The Ducks were as high as No. 3 in the country early in the season after beating Ohio State in Week 2, but had slipped behind the Buckeyes while taking a loss.

Notre Dame moved up a spot to No. 7, and the Spartans slipped three to No. 8 after losing at Purdue.

The Boilermakers remained unranked after their second upset of a team ranked in the top five at the time. Purdue was first among other teams receiving votes Sunday.

Michigan stayed at No. 9 and Oklahoma State moved up one to No. 10.

Wake Forest's first appearance in the top 10 lasted a week. The Demon Deacons lost for the first time this season Saturday, falling at North Carolina.

Seven more ranked teams lost this past weekend, upping the total to 68 on the season, including 42 to unranked teams.

The number of ranked teams to lose to unranked teams is the most through 10 weeks of a college football season, according to ESPN Stats & Info.

The three teams to move into the Top 25 this week have all been there before.

—No. 20 Wisconsin is back in the rankings after more than a month out. The Badgers have won five straight games since a 1-3 start.

—No. 21 North Carolina State returned to the Top 25 after its second straight victory. The Wolfpack had a three-week run in the rankings in October.

—No. 25 Pittsburgh moved back in after a loss knocked the Panthers out for a week.

—Kentucky lost for the third straight week to fall out of the rankings after a five-week run in the Top 25.

—SMU's second straight loss cost the Mustangs their ranking after four weeks in the Top 25.

—Fresno State is out again, a week after it jumped back in at No. 25. The Bulldogs lost at home to Boise State.

No. 4 Oklahoma at No. 18 Baylor. Eighth time the Sooners and Bears will be a matchup of ranked teams, all since 2011. Sooners are 4-3 in the first seven.

No. 9 Michigan at No. 23 Penn State. Fourth time in the last five years the Big Ten East foes will both be ranked when they play.

No. 11 Texas A&M at No. 12 Mississippi. Third meeting when both are ranked. Rebels have won the first two.

No. 21 North Carolina State at No. 13 Wake Forest. The Wolfpack and Deacs have played 113 games and just one in which both teams were ranked. N.C. State won it big in 1992.

Follow Ralph D. Russo at https://twitter.com/ralphDrussoAP and listen at http://www.appodcasts.com