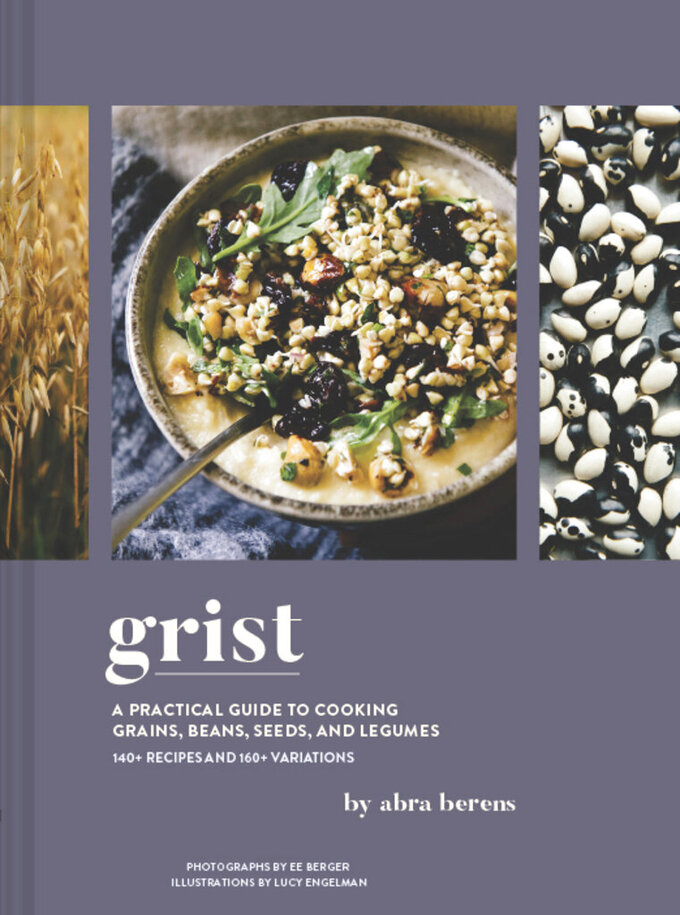 She initially found herself making split pea soup over and over again, wincing each time at the muddy, unexciting flavor. Then she came to a realization.

“I was like, wait, there are actually other things to do with split peas. If you jack up the soup with other things, it doesn’t have to be a muddy flavor," she says. "You can make split pea fritters, you can add acidic dressing — all that stuff felt so revolutionary to me.”

Berens is the executive chef at Granor Farm in Three Oaks, Michigan, and her previous guide to vegetables, “Ruffage,” was nominated for a James Beard Award and named a best cookbook for Spring 2019 by The New York Times and Bon Appetit.

As in “Ruffage,” Berens puts the home cook in the driver's seat, introducing and describing each category of grains and legumes and offering techniques on how to prepare them — stewed, fried, boiled, marinated, smashed and sprouted, among them.

Then she lets the reader pair them with various dressings, oils, relishes and other condiments, mixing and matching saltiness, acid and creaminess depending on what's on hand. No goat cheese? Swap in feta.

To help, there are grids throughout the book for building a dish. For instance, you might start with two cups of fava beans and then add shaved asparagus or cucumbers or spinach and orange segments, then add mozzarella or feta or ricotta, and then add a sauce, perhaps a rosemary lemon chili mojo or a mint almond relish.

“For better or for worse, this is just how I cook. And so it does feel very intuitive to me,” she says. ”I think it’s because I’m just bad at rote memorization. I adapted and learned how to improvise in that way."

“I would say that ‘You do you’ is very much Abra’s motto," says Sarah Billingsley, editorial director of Food & Lifestyle at Chronicle Books. "These books have an empowering quality or just an endearing quality. You feel like, ‘OK, I don’t have to do exactly what she tells me to do. I trust this writer.’”

Berens calls grains and legumes “underappreciated staples” in the book and hopes to lure readers back to ingredients that many home cooks overlook while fawning over meat, poultry or fish. She includes some meat in dishes but advocates eating it “deliberately.”

“As a global society, we tend to prioritize and fawn over the things that are the stars or the special things,.. And so these other staples seem like they are kind of the underdog or they’re used as filler,” she says.

Included throughout the book are question-and-answer columns with farmers who grow or produce the crops, from a seed cleaner in Niles, Michigan, to a wild rice forager in Cass Lake, Minnesota.

“Only about 3% of our population are farmers,” Berens says. “Fewer and fewer people are interacting with these growers. And so I was like, ‘How do we tell those stories?’ And I was like, ‘Oh, I guess we just ask them and have them tell their own story.’”

The farmer profiles reveal how complex and economically vulnerable tilling the soil can be, even before you add pressures from environmental change and supply chain complications. While no monolith, the famers often talk of being forgotten and talked down to.

Billingsley credits Berens for pushing past the kind of farmer profiles used to fill some cookbooks that paint a rosy picture and romanticize farmers like boutique California growers. “Abra really broke the mold on that,” she says.

Unlike “Ruffage,” Berens, a former vegetable farmer herself, often learned as she went with “Grist.” She and her husband grew to like and appreciate buckwheat, farro and bulgur, and these days sing the praises of the grain fonio, which is light, fluffy and gluten-free.

"I like the idea of trying to help facilitate people feeling more confident in their own kitchens. I think some parts of food media are there to make people feel like less than, and I hope that these books help people internalize some of the ingredients the way that we might in a restaurant kitchen,” she says.