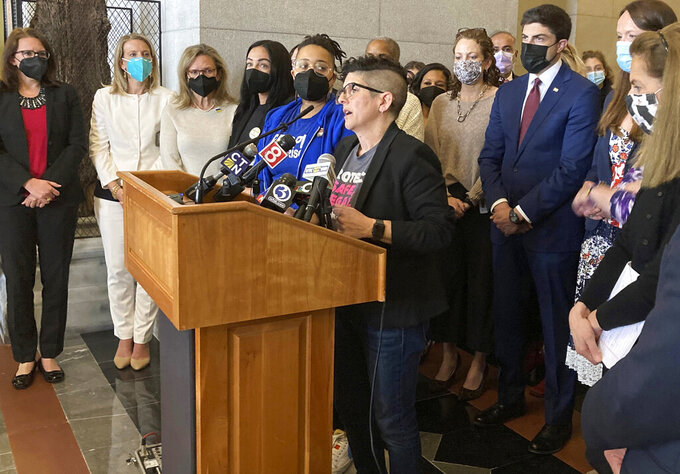 HARTFORD, Conn. (AP) — Connecticut's first major abortion-related legislation in years, which aims to legally protect providers and patients from other states’ bans on the procedure, will take effect Friday.

The legislation was passed by the Connecticut General Assembly in late April and signed into law by Democratic Gov. Ned Lamont in May in response to a Texas law that authorizes lawsuits against clinics, doctors and others who perform or facilitate a banned abortion, even in another state.

Since then, the U.S. Supreme Court has overturned the landmark Roe v. Wade ruling. Roughly half the states are expected to prohibit or severely limit the procedure now that the high court has left it up to them.

The Connecticut Office of the Attorney General is “ready to advise agencies should the state be asked to facilitate an extradition or use state resources to aid in another state’s investigation/proceeding," said a spokesperson for Attorney General William Tong this week in an email.

Connecticut's new abortion law, which also expands the types of clinicians that can provide early term abortions, is among a handful of key state laws and tax changes that take effect Friday.

Here are some highlights:

Connecticut’s new law creates a legal cause of action for abortion providers and others when they're sued in another state for helping an out-of-state patient obtain “reproductive health services” that are legal here. That will allow them to recover certain costs incurred while defending themselves in court.

The new law also limits the governor’s discretion to extradite someone accused of performing abortion services that are legal in Connecticut, as well as the participation by Connecticut courts and agencies in those criminal or civil lawsuits. This includes the issuance of subpoenas and the signing of a summons.

Language in the revised state budget, much of which also takes effect on Friday, applies the same protections to those who face an out-of-state judgement concerning gender-affirming health care that's legal in Connecticut as well.

Meanwhile, Connecticut's new law allows advanced practice registered nurses, nurse midwives or physician assistants to perform aspiration abortions in the first 12 weeks of a pregnancy. Other states have taken similar steps to expand the pool of providers. Sarah Gordon-Brilla, a spokesperson for Planned Parenthood of Southern New England, said the first cohort of advanced practice clinicians are being trained to perform aspiration abortions, a common early term abortion that involves a suctioning procedure.

Peter Wolfgang, executive director of the Family Institute of Connecticut, a group that opposes abortion and has questioned whether advanced practice clinicians are qualified to provide the procedure, predicted the provision in the new law “will likely be fought in the courts.”

The rate is currently scheduled to remain in effect until June 30, 2023.

A 2007 state law requires the diesel tax to be updated annually, based on a complex statutory formula. The fixed price tax was created to provide predictability for businesses. This year, however, it was unclear where the rate might land given rising diesel prices.

Lamont has come under criticism from his Republican opponent Bob Stefanowski for not working to suspend the increase. The governor has said he doesn't want to give a tax break to out-of-state truckers.

The new state budget, however, does extend the 25-cent-per gallon tax holiday for gasoline through Nov. 30. It was originally set to expire Thursday. It also includes a new, lower cap on local motor vehicle taxes, affecting 75 communities. Meanwhile, legislation increasing the state's earned income tax credit from 30.5% to 41.5% of the federal credit for working people of modest means takes effect.

The budget also includes a new $2,500 personal income tax credit, effective Friday, for taxpayers who’ve had a stillborn child that would have been claimed as a dependent. An estimated 100 families are expected to be eligible.

Connecticut workers earning minimum wage will receive a boost in pay on Friday.

Under a state law Lamont signed in 2019, the state's minimum hourly wage will increase from $13 to $14. The rate is scheduled to next increase to $15 an hour June 1, 2023. Beginning Jan. 1, 2024, the same law requires the wage to be indexed to the employment cost index, which is calculated by the U.S. Department of Labor.

Meanwhile, salaries for judges and magistrates are scheduled to increase by roughly 5% on Friday.