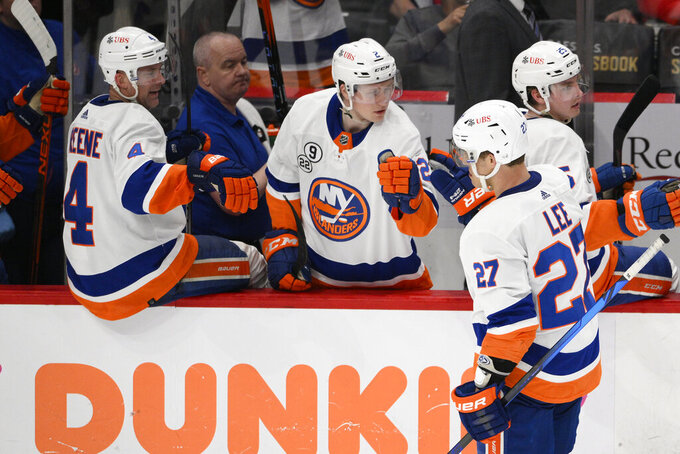 After two straight trips to the Stanley Cup semifinals, there were high expectations this season for the New York Islanders. There was also the excitement of finally moving into their long awaited new home.

However, an early season slump and a COVID-19 outbreak on the team put the Islanders (37-35-10) into a tough hole they just couldn't climb out of and they ended up missing the playoffs for the first time since 2018.

Star center Mathew Barzal said he was encouraged seeing players talking right after the season finale Friday night about what they needed to do next season.

“We were already talking about bouncing back, where we know we need to be,” he said. “When you see that quick turnaround in us wanting to have a winning mentality and not worrying about plans this weekend, the chatter was all about getting better for next year and taking this long offseason and getting stronger.”

The Islanders had 20 players miss time while on COVID-19 protocols and several games in November and December were postponed. An 11-game losing streak dropped the Islanders to 5-15-5 in early December and they spent much of the season 15 or more points out of a playoff spot.

An 11-4-1 stretch pulled them within 11 points of the second wild card in the Eastern Conference on April 3, but that was as close as they got. They finished 16 points out.

“I think we all wanted to succeed so badly and we all wanted to figure everything out and everyone was working towards that,” captain Anders Lee said. “We did the best we could. ... At the end of the day, we just didn’t we didn’t perform when we needed to and play the the hockey that we needed to at the right time.”

The Islanders made the playoffs each of the first three years under coach Barry Trotz, reaching the second round in 2019 and the semifinals the last two. Only two-time defending Stanley Cup champion Tampa Bay advanced further in the postseason in each of the last two years.

Now, the Islanders have 4 1/2 months — their longest offseason in four years — until training camp opens in September

“You take advantage of the situation you have in front of you,” veteran forward Josh Bailey said. “For us, that’s what it is right now. It’s rest, spend time with your families, recharge the batteries, as the summer goes on you get hungrier and hungrier and come back ready to go.”

Several players put up terrific numbers with Brock Nelson setting career highs of 37 goals and 59 points. Barzal also had 59 points, reaching 40 assists for the fourth time in his career, and Noah Dobson (13 goals, 38 assists) became the first Islanders defenseman to reach 50 points since Mark Streit in 2008-09.

Oliver Wahlstrom (13 goals, 11 assists in 73 games) was a regular in the lineup this season, and other youngsters such as Kieffer Bellows (six goals, 13 assists in 45 games), Robin Salo, Austin Czarnik and Otto Koivula played some valuable minutes as fill-ins.

GETTING COMFORTABLE AT UBS ARENA

The Islanders had to wait 13 games before opening their new home next to the race track at Belmont Park. They started 0-5-2 there before settling in and winning seven of nine. They had another stretch late in the season in which they won 10 of 12 on home ice to finish 20-16-5.

“Definitely there was a transition there,” Lee said. “Not going to feel like home right away and the way we started at home didn’t feel right. ... It definitely took us a little time to settle in and and next year there’s nothing new. We know the routine and we know what it’s like over there.”

There could be some changes to the roster for next season as veteran defensemen Zdeno Chara and Andy Greene might have played their last NHL games, though neither has indicated his intent. Trotz and general manager Lou Lamoriello have repeatedly expressed support for the core group that was kept intact last summer and at the midseason trade deadline.

“You saw we started to turn it a bit, play some better hockey, went on a little bit of a good stretch with a good record," Nelson said of the team's strong late-season run. “It’s part of the business, you never know what happens. It’s beyond our control and up to Lou ultimately but if it is the same group coming back I think everybody in here believes we can get back to where we were.”