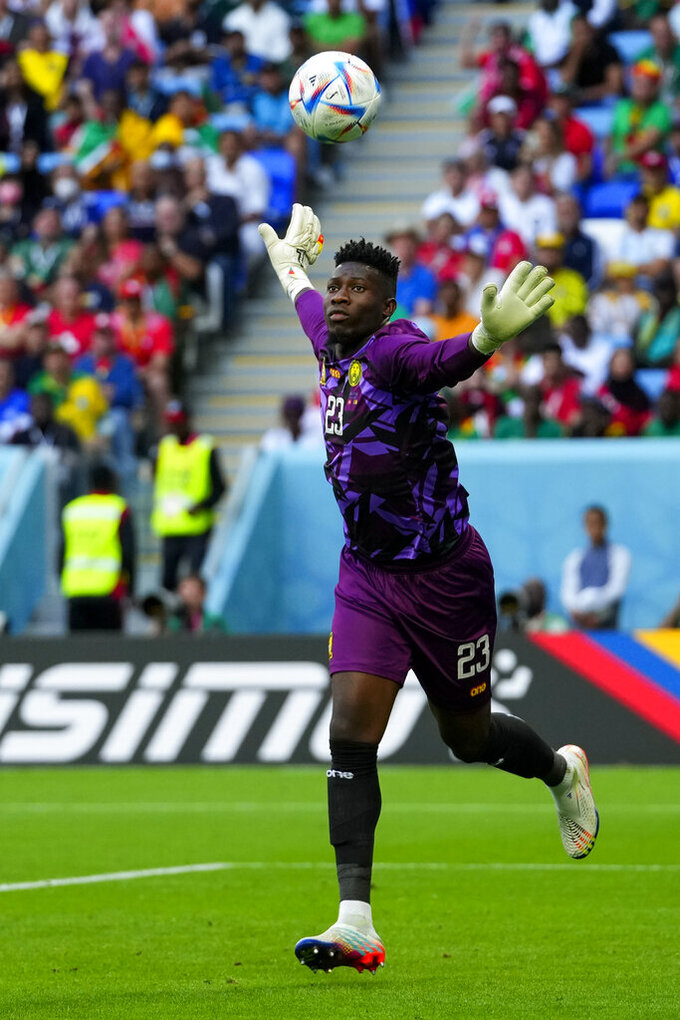 AL RAYYAN, Qatar (AP) — Cameroon goalkeeper Andre Onana apparently left the World Cup on Tuesday and was heading home after being dropped from the country's squad for disciplinary reasons.

A photo posted by a Cameroonian journalist on social media showed the Inter Milan goalkeeper at the airport in Doha and about to leave Qatar. The Cameroon team spokesman did not immediately answer calls seeking comment.

Onana also released a statement on Tuesday referring to his dispute with Cameroon coach Rigobert Song over team tactics that led to him being dropped for Cameroon's 3-3 draw with Serbia on Monday and suspended from the team.

Onana said he had tried to resolve the issues.

“I have put all my efforts and energy into finding solutions to a situation that a footballer often experiences, but there has been no will on the other side,” Onana said. “Some moments are difficult to assimilate.”

Onana said he respected the decisions “of the people in charge.”

Onana had played in Cameroon's opening game at the World Cup, a 1-0 loss to Switzerland, but was dropped for the Serbia game and didn't travel with the rest of the squad to Al Janoub Stadium. Cameroon fought back from 3-1 down to draw 3-3 without its No. 1 goalkeeper.

Song said it was a risk to play with reserve goalkeeper Devis Epassy but insisted he had to take “strong action” against the 26-year-old Onana.

“If you can’t fit in with what’s required to be part of a squad then I do think that you need to step up to the plate and accept responsibility for that because the team, the squad, is more important than the interests of any individual," Song said Monday after the Serbia game without going into details of his disagreement with Onana.

Song said he needed all his players to “show discipline and respect.”

In his statement, Onana said he was disappointed that he was “not allowed” to be with the team at the Serbia game and denied that he had broken any squad disciplinary rules.

“I always behaved in a way to lead the team to success in a good manner,” Onana said.

Cameroon still has a chance of qualifying for the last 16 at the World Cup but needs to beat top-ranked Brazil in its final Group G game and hope that the result of the Switzerland-Serbia match goes in its favor.

Song is a former captain of Cameroon who was appointed coach in February in a surprise to some after Toni Conceicao guided the team to third place at this year's African Cup of Nations and only missed reaching the final in a penalty shootout loss to Egypt.

The president of the Cameroon soccer federation is Samuel Eto'o, a former teammate of Song on the national team.