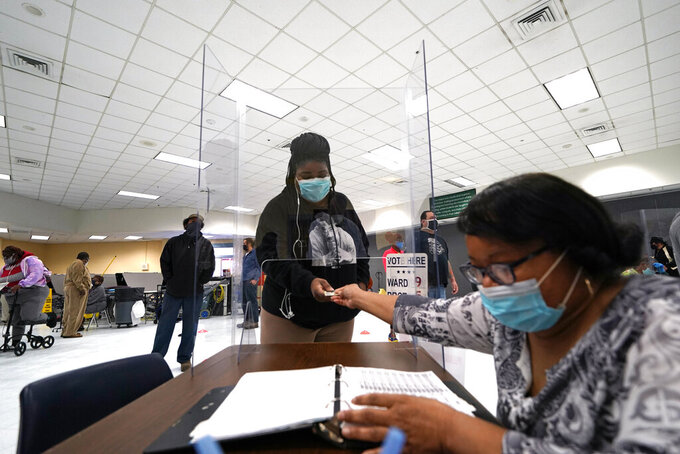 Gerald Herbert, ASSOCIATED PRESS
FILE - A woman presents her identification to vote through a plexiglass barrier, to prevent the spread of the coronavirus, on election day at the Matin Luther King, Jr. Elementary School, in the Lower Ninth Ward of New Orleans on Nov. 3, 2020. Louisiana’s secretary of state and attorney general asked the U.S. Supreme Court on Friday, June 17, 2022, to put a hold on a federal judge’s order for the state to create a second majority Black congressional district by Monday. (AP Photo/Gerald Herbert, File)

Louisiana’s secretary of state and attorney general asked the U.S. Supreme Court on Friday to put a hold on a federal judge’s order for the state to create a second majority Black congressional district by Monday.

The judge refused to give legislators another 10 days on Thursday, again calling the arguments by Senate President Page Cortez and House Speaker Clay Schexnayder disingenuous and insincere. She noted that with less than a week to do the work, legislators met for only 90 minutes Wednesday, the first day of a special session for redistricting.

House and Senate committees met Friday to discuss proposed maps, but lawmakers said they are not confident that Democrats and Republicans will agree new congressional boundaries.

Perhaps the most significant sign that the Legislature may be unsuccessful in adopting a new map ahead of the Monday deadline occurred when the committees rejected two Democrat-proposed bills — both of which would add a second majority-Black district — despite pleas for support from members of the Louisiana Legislative Black Caucus.

“Black voters in Louisiana have less opportunity to elect candidates of their choice under the current congressional map because of the way the district lines are drawn," Democratic Rep. Royce Duplessis, a member of the Black Caucus, said during the House and Governmental Affairs Committee meeting.

Duplessis' map failed by an 8-7 vote in the committee. Rep. Barry Ivey was the sole Republican who voted in favor of the bill, saying that although he didn't support the boundaries, he felt the bill should reach the House to give all lawmakers the opportunity to look at, debate and discuss the map.

One bill did pass in committee and will reach the Senate floor. The map — which has two slim majority-Black districts, one with a Black voting age population of 50.08% and another with 50.136% — was passed “without action," meaning lawmakers did not move the legislation favorably. The bill is being used as an “instrument” to continue the session and give legislators a chance to successfully pass a map.

Redistricting has divided the Republican-dominated legislature and Gov. John Bel Edwards, a Democrat, since February, when the legislature approved a congressional map with white majorities in five of six districts.

Edwards vetoed it, saying that because Louisiana’s population is nearly one-third Black, at least two districts should have African American majorities. The legislature overrode his veto. Dick then ordered legislators to create new districts, including two that are majority Black, ruling that the current map violates the Voting Rights Act by diluting the impact of voting by Black people.

Friday's motion argued that “this case presents the exact question” justices will decide in an Alabama case, so the two should either be consolidated or Louisiana's case should wait until Alabama's is decided.

The Supreme Court gave the two groups of Black voters who sued the state until Thursday to respond.

Dick has ordered attorneys on both sides to provide maps that she will use to draw her own if the Legislature doesn’t meet the Monday deadline.

In her original 152-page ruling on June 6, Dick noted that when the justices stayed Alabama's redistricting order, that state's primary was much closer. Louisiana holds its open congressional primary on Nov. 8, the same day as the general election. Candidates must file to run by July 22.

“A stay increases the risk that Plaintiffs do not have an opportunity to vote under a nondilutive congressional map until 2024, almost halfway through this census cycle,” she wrote three days later, refusing to put a hold on her order.