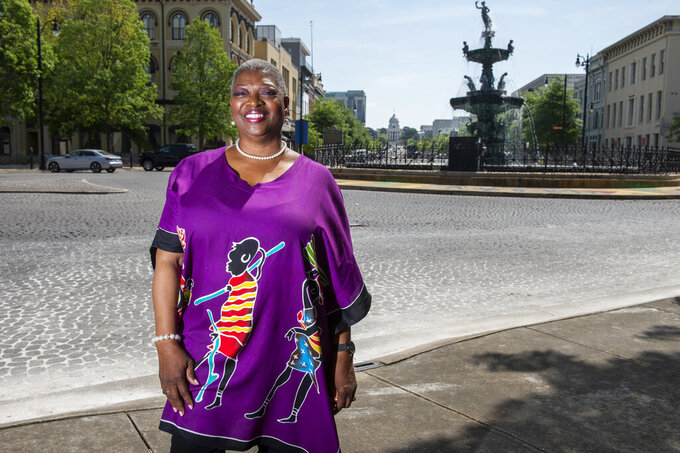 MONTGOMERY, Ala. (AP) — The call came from one of the many people Wanda Howard Battle considers a family member, whether they’re related or not. They were asking her to do something different: Lead tours of one of the nation’s most historic places, Dexter Avenue King Memorial Baptist Church in her hometown of Montgomery.

Her mind drifted back to her childhood here. Battle was born the year that her family and other Black residents were boycotting Montgomery buses. She grew up sharing her childhood home with rights workers, and Battle remembers standing on the porch with her sister to sing spirituals and hymns of freedom each day as the sun went down.

Her mother moved them out of state when the church’s former pastor, Martin Luther King Jr., was gunned down by an assassin. Battle never expected to come back.

But a devotion to family brought her home, and Battle has since rededicated herself to helping improve the city however she can. Because of that work, she has been named the Montgomery Advertiser Community Hero for May, an honor sponsored by South University.

The former bank worker and home care aide has spent years building ties in the community, advocating for improvements to historic neighborhoods and sharing the stories of what happened in those places. More people have been wanting to hear those stories lately, so last year Battle opened her own business here, Legendary Tours.

Once the quiet child of the family, Battle now raises her voice in song in front of the pulpit where King once preached. “This little light of mine, I’m gonna let it shine!” her voice rings out. A diverse group of tourists joins in the way her sister once did.

“For such a time as this, I am in the right place, and I’m doing work that I know is divinely ordered. It has given my life such purpose and meaning.”

It wasn’t always that way.

The winding road back to Montgomery led her through careers in Chicago and Atlanta, through a battle with depression and a search to find the light within herself, the one that everyone around her sees so clearly. The constant was family.

When she came back in 1995 it was to bring her grandmother home, but she found a city in need of love. People had moved out of downtown. Many of the businesses she grew up around were gone. The interstate had replaced the street where she grew up, which was also the home of the Montgomery Improvement Association. All of it was gone without even a marker.

Since then, things started changing, and Battle said she wanted to be part of that change. “I’ve watched the last four mayors of the city (bring) vision in developing this downtown area,” Battle said. “Now we have our first African American mayor, Mayor Steven Reed, and there’s another vision to expand that out to the Black communities on the west side (and) Centennial Hill.”

She’s part of a push to make Centennial Hill a historic district and an advocate of an effort by Reed and others to more fully develop west Montgomery. Meanwhile, Battle is here to do more than tell the stories.

Her cousin, former Community Hero Rebecca Martin, said Battle is a regular at community events in Chisholm, among other places, where she shows up to help pass out supplies for neighborhood kids. Beyond that, Martin described Battle as a rock for her extended family, sometimes traveling to support relatives. When Martin’s husband died last year, Battle was the soloist at his funeral.

“The family’s so proud of her and so grateful to have her out there spreading good news and getting into good trouble,” Martin said.

Valda Harris Montgomery, who grew up a few doors down from King in Centennial Hill, said those strong family ties are evident in many ways.

“She’s got a lot of Montgomery in her, even though she moved away,” she said. “She’s her mother’s child.”

It’s 10 a.m. on a weekday, and buses full of tourists crisscross through downtown Montgomery behind Ashley Jernigan.

Nearly two years into a racial reckoning that continues to ripple across the nation and world, Alabama’s Capital City is booming with people here to see where the modern civil rights movement began and better understand its impact. The city’s lodging tax revenue jumped 84% year-over-year in February alone and continues to rise, boosted by the Equal Justice Initiative’s recently expanded Legacy Museum.

“They want to know what happened …” says Jernigan, a tourism consultant with the Montgomery Area Chamber of Commerce. “They want to know, and now they feel comfortable walking into a space and asking the question.”

Jernigan said Battle is a valuable part of that because of her genuine passion and love for the city, for its history and for people in general. “Wanda just exudes that happiness that makes you want to smile. They make you want to sing a song — and she will make you,” Jernigan laughed.

Rosemary Judkins of the state’s tourism department calls Battle “an experience giver” and said the department has invited her on the road with them as they work to find more like her.

“Whenever we need to explain an experience giver, we just present Wanda,” Judkins said. “… Our tours have to be an experience, and it has to be immersive. It changes you, and if it doesn’t we haven’t done our jobs.”

It continues to change Battle.

Even after hundreds of tours, her voice still breaks with emotion when she talks about the honor of standing in the spot where King once preached, or at the corner nearby where Rosa Parks once waited for the bus. When she talks about Claudette Colvin, who was arrested for refusing to give up her seat on a city bus nine months before Parks, she’s talking about “a cousin on my daddy’s side,” one of many ways it’s still all about family for Battle.

“It’s changed something in me to say, ‘Wanda, you can do this. Keep speaking love. Keep speaking truth. Keep giving people hope.’ Because if we lose hope that we can be better together, we fall apart,” Battle said.