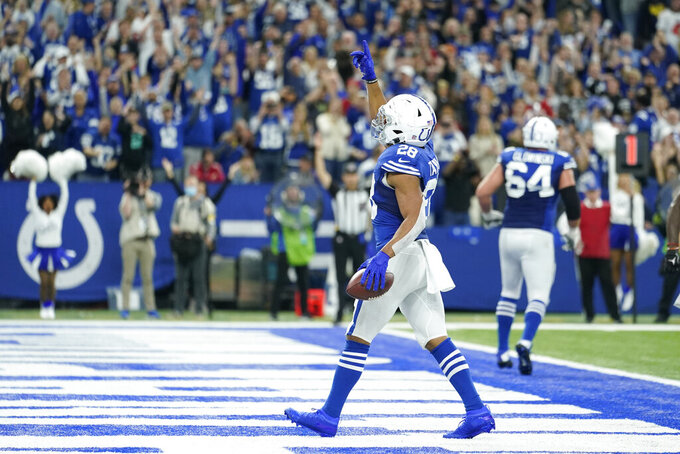 Michael Conroy, ASSOCIATED PRESS
Indianapolis Colts' Jonathan Taylor (28) reacts after rushing for a touchdown during the second half of an NFL football game against the Tampa Bay Buccaneers, Sunday, Nov. 28, 2021, in Indianapolis. (AP Photo/Michael Conroy)

Sunday night's game, which replaces San Francisco at Seattle, is for the AFC West lead, which makes it significant enough. Plus, anytime the NFL and NBC can get Patrick Mahomes, Travis Kelce and the rest of the Chiefs in prime time is an opportunity they tend to seize.

“It’s like somebody mentioned the other day: Sunday night is THE game,” Broncos coach Vic Fangio said this week, “so players get amped for it. I don’t think we’ll have an issue being emotionally ready.

“Besides,” Fangio added, “we’re playing the Chiefs, who have been the best team in football the last three years.”

So the Chiefs (7-4), who have won four straight games and have a one-game lead over Denver, Las Vegas and the Los Angeles Chargers in the division, get to showcase not only their offensive prowess but their recent significant improvement on defense. That often-maligned unit has allowed 18 points or fewer in each of those four victories.

“I think guys have done a great job of stepping up in their roles,” Mahomes says. “You have the mindset of, ‘We’re going to go out there and be who we are.’"

Who the Chiefs are against the Broncos is unbeatable in the past 11 meetings. Reid is 19-3 in games immediately after a bye, 6-2 for the Chiefs and 11-1 in such home games. Indeed, Kansas City is 37-13 against the AFC West since Reid became head coach.

The action began with the Dallas Cowboys' 27-17 win over the New Orleans Saints on Thursday night. CeeDee Lamb had 122 yards from scrimmage, Tony Pollard had a 58-yard touchdown run and the Dallas defense produced timely sacks and turnovers as the Cowboys (8-4) solidified their position atop the NFC East, where they lead Washington by 2 1/2 games. The injury-riddled Saints (5-7) lost their fifth straight as Taysom Hill got his first start at quarterback this season, throwing four interceptions.

AFC East supremacy is up for grabs, something the Patriots owned for more than a decade until Tom Brady left last year.

“People who love football want a chance to play in games like this,” says Patriots rookie quarterback Mac Jones.

For years, this has been among if not the best of NFL rivalries: fierce, hard-hitting football usually featuring powerful defenses and opportunistic offenses.

Yet the Ravens, who somehow rank dead last in passing D but are in first place in the AFC North, and the staggering Steelers don't seem to have the same cachet this time.

We'll be watching anyway, particularly with Baltimore atop the conference standings despite its struggles — including Lamar Jackson throwing a career-worst four interceptions in a less-than-stellar victory against Cleveland.

Meanwhile, the Steelers have allowed 180.5 yards per game on the ground over the past four weeks. Baltimore ranks second in rushing.

Whichever team wins this one will vastly upgrade its playoff chances. Indeed, they both are one game behind in their divisions.

Like so many clubs recently, the Bengals have rediscovered the run game. Joe Mixon, healthy for once, has been on a tear, while the Chargers’ leaky run defense is allowing an NFL-worst 145 yards per game.

If this comes down to the fourth quarter, either side could take control. The Bengals are third (102 points) in scoring during that period, and the Chargers are tied for fourth (100). L.A. has allowed 24 or more points in seven straight games, the longest current streak in the league.

It wasn't just the Super Bowl comeback he orchestrated against the Falcons that marks Brady's success when facing Atlanta. Brady is 9-0 and has thrown for 2,973 yards and 24 touchdowns with just three interceptions in nine career starts against the Falcons. In Week 2, he threw for 276 yards, five touchdowns and no interceptions in a romp. Brady leads the league with 30 TD passes.

The Falcons are 0-4 at home and have lost six straight at Mercedes-Benz Stadium going back to 2020.

“We want to win at home,” coach Arthur Smith says. “We appreciate our fans. Our fans did a great job. It was really cool to see down in Jacksonville a lot of our fans there. That was awesome. So, we got to do our part at home.”

The Cardinals figure to get back key offensive playmakers in quarterback Kyler Murray and wideout DeAndre Hopkins as they try to go 7-0 on the road. They’ve won the previous six road games by 10 points or more, something only the 1968 Cowboys and 1936 Bears accomplished. Arizona comes off a bye bringing an opportunistic defense, forcing a league-best 15 fumbles. The Cardinals have recovered 11, second in the league.

Justin Fields is healing from cracked ribs and if he can't go at quarterback for Chicago, Andy Dalton will. Dalton threw for a Bears season-high 317 yards and a touchdown on Thanksgiving, but that was against the winless Lions.

If the Rams can't stop their three-game slide against the Jaguars, any thoughts of their being a Super Bowl contender should be questioned.

Matthew Stafford has thrown a pick-6 in three straight games, even as the NFL's most productive receiver, Cooper Kupp has managed to stay in peak form with 29 catches for 313 yards. But he doesn’t have a touchdown reception in the three losses after getting 10 scores in the first eight games — more an indictment of Stafford and the offensive line than of Kupp.

This will be Jacksonville’s first game against the Rams in Los Angeles. The Jags were 0-3 in St. Louis.

Seattle is in the lead for most disappointing team, and barring a massive turnaround it won't be more than a spoiler down the stretch. The offense has disappeared, with four consecutive losses with Russell Wilson at quarterback.

But the Seahawks have won three straight against San Francisco, which likely will be missing its best offensive (WR/RB Deebo Samuel) and defensive (LB Fred Warner) performers. San Francisco’s streak of three straight games scoring at least 30 points is the longest one-season string for the franchise since a five-gamer in 2013.

The Colts like playing in Houston, where they are 13-6. Their chances are pretty strong for improving that mark as long as they put the ball in Jonathan Taylor's hands. He leads the NFL with 1,205 yards rushing and 14 touchdowns; the Texans rank 31st while allowing 135.6 yards rushing a game. Taylor had 145 yards rushing and two scores in the first meeting with Houston this season.

“J.T. (Jonathan Taylor)’s been balling, and props to that guy," says Houston defensive lineman Jacob Martin. “He’s been running his tail off all year. I think for us to be successful on defense, it comes to us playing gap-sound defense and limiting those big yards in the run game and those big shots on the play-action.”

Good luck with that.

Giants quarterback Daniel Jones is out with a neck problem. No such health worries with Tua Tagovailoa, whose sharp recent performances have helped Miami win its past four games. Veteran Mike Glennon goes for New York.

The Giants are 3-0 at Miami, plus won in London in 2007 for a designated Dolphins home game. They’re the only team that has never lost when facing the Dolphins on the road. The Dolphins’ 2-7 record against the Giants is their second worst against any opponent. They’re 2-8 against Houston, which Miami beat this season.

After an absolute stinker by the Eagles versus the Giants at the Meadowlands last Sunday, they try again, this time against the Jets, who are 0-11 against Philly — the only team the Jets have not beaten.

Eagles quarterback Jalen Hurts had an awful game a week ago with three interceptions; he had only five in the previous 11 games. His team continued to dominate on the ground, though. The Eagles have 1,078 yards rushing in the past five games, running for 200-plus yards in three straight games for the first time since 1978. Philadelphia has 18 rushing TDs, the most it has gotten through 12 games since 22 in 1953. New York has struggled stopping the run.

Washington defensive coordinator Jack Del Rio coached the Raiders from 2015-17 when they were in Oakland, and is the only coach to lead them to the playoffs since 2003. He's helped Washington win three in a row since its bye week.

Helping just as much: Taylor Heinicke has thrown a TD pass in seven consecutive games.

Third downs could be decisive at Allegiant Stadium, where the Raiders are 5-9 since moving in. The Raiders have been the fourth-worst team on offense at converting third downs at 34.4%. Washington has been the worst team at stopping them, allowing 51.4% to be converted for the sixth-worst rate through 11 games since 1991.

Minnesota has won eight straight games against the Lions after Vikings coach Mike Zimmer started 2-5 against them.

Both running games could be hobbled. Minnesota is without Dalvin Cook (shoulder), so Alexander Mattison should be the main man. He had his first rushing TD of the season last week after Cook was hurt, but when the Vikings played at Detroit in the 2020 season finale, Mattison had 95 rushing yards, 50 receiving yards and a receiving TD.

Detroit goes with Jamaal Williams because of D’Andre Swift’s shoulder injury. He had a season-high 15 carries for 65 yards and five receptions on Thanksgiving against Chicago.