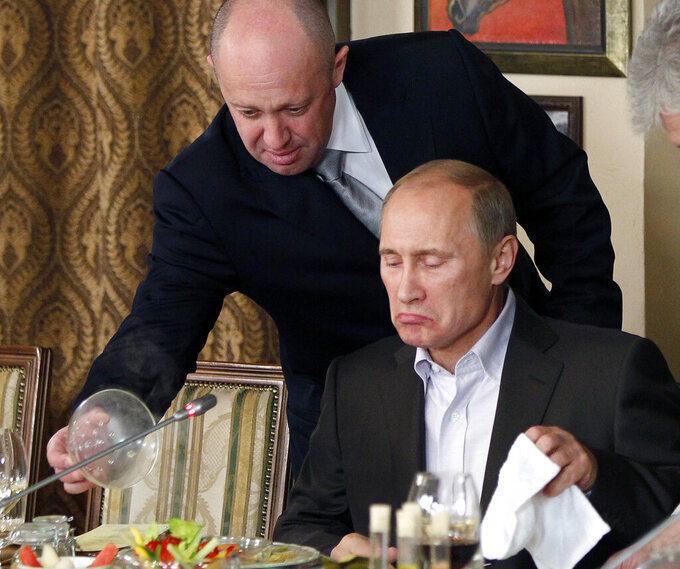 Misha Japaridze, ASSOCIATED PRESS
FILE - Yevgeny Prigozhin, top, serves food to then-Russian Prime Minister Vladimir Putin at Prigozhin's restaurant outside Moscow, Russia in Nov. 11, 2011. Kremlin-connected businessman Yevgeny Prigozhin kept a low profile over the years, but he has been increasingly in the spotlight recently. He has admitted that he is behind the Russian mercenary force that reportedly has been involved in conflicts around the world, including Ukraine. (AP Photo/Misha Japaridze, Pool, File)

Prigozhin has kept a low profile over the years. But in recent months, the 61-year-old entrepreneur with links to Russian President Vladimir Putin has become more and more public with his activities, especially involving Moscow's 8-month-old war in Ukraine.

This week, he gained new attention by admitting his involvement — previously denied — in the events that drew the scrutiny of U.S. officials: meddling in American elections.

Prigozhin and Putin go way back, with both born in Leningrad, what is now known as St. Petersburg.

During the final years of the Soviet Union, Prigozhin served time in prison — 10 years by his own admission — although he did not say what it was for.

Afterward, he owned a hot dog stand and then fancy restaurants that drew interest from Putin. In his first term, the Russian leader took then-French President Jacques Chirac to dine at one of them.

“Vladimir Putin saw how I built a business out of a kiosk, he saw that I don’t mind serving to the esteemed guests because they were my guests,” Prigozhin recalled in an interview published in 2011.

His businesses expanded significantly to catering and providing school lunches. In 2010, Putin helped open Prigozhin’s factory that was built on generous loans by a state bank. In Moscow alone, his company Concord won millions of dollars in contracts to provide meals at public schools. He also organized catering for Kremlin events for several years — earning him the nickname “Putin's chef” — and has provided catering and utility services to the Russian military.

For years, media reports and Western officials linked Prigozhin to a Russian private military contractor called the Wagner Group, a mercenary force said to have been involved in conflicts in Libya and Syria, as well as in under-the-radar military operations across at least a half-dozen African countries. The group also has played a prominent role in fighting in Ukraine.

Prigozhin had always denied having anything to do with Wagner. But in September, he acknowledged being the founder of Wagner in a social media statement released by his companies' press service. He said that when fighting broke out in eastern Ukraine between Russian-backed separatists and Kyiv’s forces in 2014, he was seeking to “put together a group (of fighters) that would go (there) and defend the Russians.”

He also said that Wagner "defended the Syrian people, other peoples of the Arab countries, disadvantaged Africans and Latin Americans.”

Video emerged recently of a man resembling Prigozhin visiting Russian penal colonies to recruit prisoners to fight in Ukraine. Asked about these visits, he didn’t directly confirm or deny it, only saying through his press service that he was once incarcerated and thus has been in a number of prisons.

Prigozhin has also spoken about the construction of a “Wagner line” — a system of trenches and anti-tank defenses — in Luhansk, one of four Ukrainian provinces illegally annexed by Moscow in September, and the creation of training centers for defensive militias in Russia’s Belgorod and Kursk regions that border Ukraine.

Wagner also opened a business center in St. Petersburg to wide fanfare, and Prigozhin boasted it would become a platform for increasing Russia's "defense capabilities,” promising to expand to other locations if successful.

In 2018, Prigozhin and a dozen other Russian nationals and three Russian companies were charged in the U.S. with operating a covert social media campaign aimed at fomenting discord and dividing American public opinion ahead of the 2016 presidential election won by Republican Donald Trump. They were indicted as part of special counsel Robert Mueller’s investigation into Russian election interference. Prigozhin was later sanctioned by the U.S. Treasury Department.

After the indictment, the RIA Novosti news agency quoted him as saying, in a clearly sarcastic remark: “Americans are very impressionable people; they see what they want to see. I treat them with great respect. I’m not at all upset that I’m on this list. If they want to see the devil, let them see him.”

The Justice Department in 2020 moved to dismiss charges against two of the firms, Concord Management and Consulting LLC and Concord Catering, saying they had concluded a trial against a corporate defendant with no presence in the U.S. and no prospect of meaningful punishment even if convicted would likely expose sensitive law enforcement tools and techniques.

In July, the State Department offered a reward of up to $10 million for information about Russian interference in U.S. elections, including on Prigozhin and the Internet Research Agency, the troll farm in St. Petersburg that his companies were accused of funding.

Prigozhin had denied involvement in any of that — until Monday, the eve of the U.S. midterms. The press service of one of his companies posted on social media his response to a question from a Russian news outlet about allegations of such interference.

“Gentlemen, we have interfered, are interfering and will interfere. Carefully, precisely, surgically and in our own way, as we know how to do,” the response read. "During our pinpoint operations, we will be removing both of the kidneys and the liver at once.”

Some Russian state-funded media described his remarks as irony.

In response, the White House called him “a known bad actor who has been sanctioned by the United States, the United Kingdom and the European Union,” and State Department spokesman Ned Price said Prigozhin's “bold confession, if anything, appears to be just a manifestation of the impunity that crooks and cronies enjoy under President Putin and the Kremlin.”

Prigozhin reacted to Price's remarks in English, saying, among other things, that the U.S. has been “rudely meddling” with elections around the world for decades.

SARCASM OR BOOSTING HIS PROFILE?

Whether sarcastic or not, the remark gained wide attention in the West. It also fueled long-brewing speculation that he is seeking a bigger role on Russia’s political scene.

Prigozhin said through his press service he doesn’t plan to “formalize his political status in any way. ... And if I am offered this, I think that I will refuse.”

He has joined the strongman leader of the Russian republic of Chechnya, Ramzan Kadyrov, in publicly criticizing Moscow’s military brass over its conduct of the war.

Some media reports suggested Prigozhin’s influence on Putin is growing and he is after a prominent political post. But analysts warned against overestimating his political significance.

“He’s not one of Putin’s close figures or a confidant,” said Mark Galeotti of University College, London, who specializes in Russian security affairs, speaking on his podcast “In Moscow’s Shadows.”

“Prigozhin does what the Kremlin wants and does very well for himself in the process. But that’s the thing — he is part of the staff rather than part of the family,” Galeotti said.

Analysts say Prigozhin's influence has grown but remains rather limited.

Tatyana Stanovaya, founder of the independent R.Politik think tank, in a recent Telegram post called Prigozhin “influential in his own way.”

Although Prigozhin denies it, Stanovaya said he meets regularly with Putin, especially recently. She added that he has close ties with certain security agencies and “with some of his functions, he can even claim the role of Putin’s private special service,” Stanovaya wrote.

She noted, however, that his influence “is indeed greatly exaggerated in the West” and is limited to a “narrow and peculiar” niche.