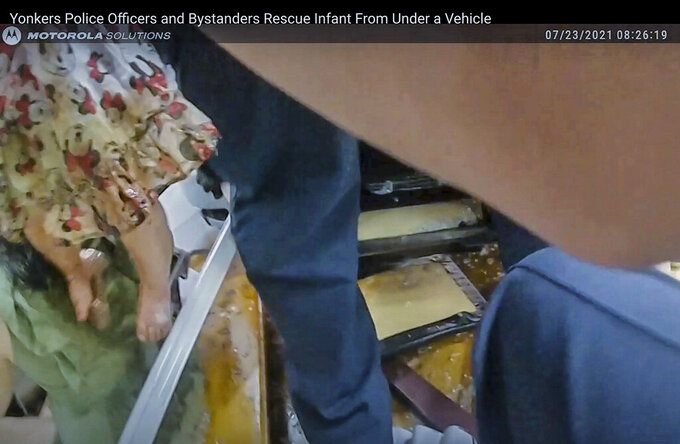 YONKERS, N.Y. (AP) — Police and bystanders lifted a car to free a trapped baby after a suspected drunken driver struck the girl and her mother and then plowed through a storefront with the pair on the hood.

The crash and rescue were recorded on video released by Yonkers Police.

It shows a Hyundai Elantra striking a curb and parked car Friday before driving into a woman as she crossed the street with a child in her arms. With the woman and child on the hood of the car, it accelerates through the storefront of a barber shop.

Police body camera footage from inside the building shows Yonkers Officers Rocco Fusco and Paul Samoyedny, who had been having breakfast nearby, frantically working with bystanders to lift the heavily damaged car and pull the crying 8-month-old girl from beneath it.

“Luckily, two veteran officers of Yonkers’ finest just happened to be getting breakfast next door and quickly took action along with members of the community to rescue a child trapped under the vehicle and render aid to her mother,” Police Commissioner John Mueller said in a news release. “The actions taken are nothing short of heroic.”

The baby sustained a skull fracture and burns to her back and foot. Her 36-year-old mother broke a leg, the news release said.

The 43-year-old male driver and a female passenger were not injured.

The driver, from Yonkers, was charged with driving while intoxicated, vehicular assault and aggravated unlicensed operation.