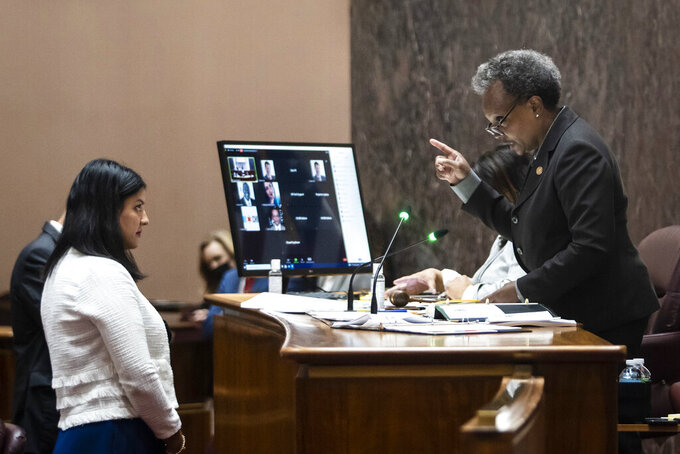 CHICAGO (AP) — After years of protests over law enforcement misconduct, the Chicago City Council on Wednesday approved a panel giving citizens more input on how the city’s police perform its duties.

The panel is a compromise between Mayor Lori Lightfoot and activists. Both had pushed competing proposals that failed to get much support from aldermen.

The ordinance that passed 36-13 calls for the creation of a seven-member Community Commission for Public Safety and Accountability that would comprise people nominated by three-member councils of Chicago’s 22 police districts.

Lightfoot, a former assistant U.S. attorney, made a case for the compromise before the vote, saying she prosecuted both gang members and corrupt police officers, and that she headed the city’s Office of Professional Standards.

“This ordinance, should it pass, will not solve all problems. It will not make every challenge that we face on public safety and accountability go away,” she said. “There is much more work to be done.”

Opponents of the measure said adding more scrutiny to police officers’ jobs will make it harder for them to do their jobs.

Alderman Anthony Napolitano, a former Chicago Police officer whose ward is home to scores of officers, predicted the Council would be back in six months, creating “another acronym committee to find out why our crime has tripled.

“This 12th layer of police oversight is gonna make every potential wannabe officer think about going in a different direction,” Napolitano said.

Prior to the City Council’s vote, Fraternal Order of Police President John Catanzara noted the union has agreed to a number of accountability measures as part of a tentative, eight-year contract. He also noted multiple layers of oversight provided by the city’s Police Board, the Civilian Office of Police Accountability, the police department’s Internal Affairs Division and the Illinois Attorney General’s office.

“Another layer of oversight is just ridiculous. It’s only going to make coppers more pissed off because more oversight means, ’You’re doing something wrong. You need to be watched because you’re not doing something right,’” he said.

However, Alderman Leslie Hairston said the ordinance is a chance to change the city’s policing trajectory after decades of police misconduct.

“Here in the city of Chicago, in my two decades of having sat on this council, we have seen, from Jon Burge torture and murders, to Laquan McDonald and Adam Toledo. And we have to know that what we’re doing, and our approach, is not and has not been working,” Hairston said.

A federal judge in 2019 approved a plan for court-supervised reforms of the beleaguered Chicago Police Department. The action came two years after a U.S. Justice Department report found a long history of racial bias and excessive use of force by officers in the nation’s third-largest city.

The 236-page plan negotiated between Illinois and Chicago officials calls for more community policing, more data collection on how some 13,500 officers work and expanded training on the use of force. One provision will require officers to file paperwork each time they point a gun at someone, even if they don’t fire.