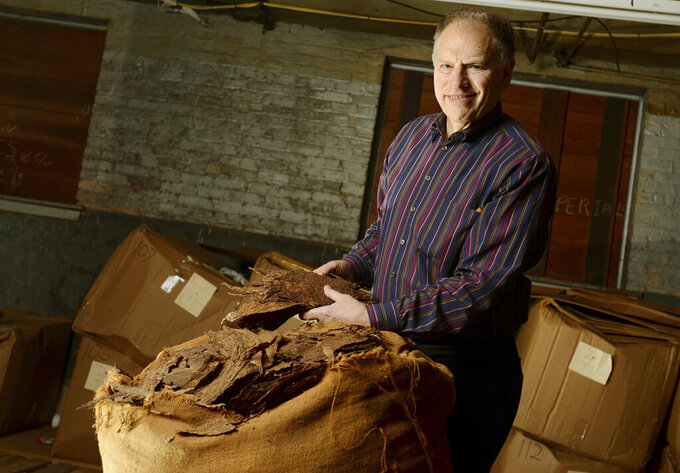 CHRIS URSO, ASSOCIATED PRESS
Eric Newman, President of J.C. Newman Cigar Company, poses for a photograph Friday, Dec. 19, 2014 along with a bail of Cuban tobacco that was purchased before the 1960 embargo. One of the historic sweeping changes in the United States' policy toward Cuba that President Barrack Obama announced on Wednesday was allowing U.S. citizens visiting the island nation to bring up to $100 in tobacco products back with them. (Chris Urso/Tampa Bay Times via AP)

Purchased just prior to the U.S. government cutting off all business relations with the socialist nation in 1962, the Newman family now stores it in their Ybor City factory basement.

They use it as part of a history tour detailing Tampa’s time as cigar rolling capitol of the world, which was made possible due to the city’s close relationship with Cuba’s tobacco farmers.

The Newmans now hope to import the first bales of Cuban tobacco since the embargo was enacted six decades ago.

They have petitioned the U.S. State Department for permission to do so via an Obama-era program that allows American businesses to import goods and services produced by Cuban entrepreneurs who operate independently of Cuba’s state-run economy.

Cuban cigars are banned in the U.S. because they are only rolled through a partnership between Cuba’s state-run Habanos S.A. and London-based Imperial Tobacco.

“There are independent farmers growing tobacco in Cuba, including some independent tobacco farming co-ops,” said Drew Newman, general counsel for J.C. Newman, which is Tampa’s last cigar factory. “Before President Kennedy imposed the Cuban Embargo, my grandfather and great-grandfather imported millions of pounds of Cuban tobacco into the United States through the Port of Tampa.”

“We’ll take as much as we can get or as little as we can get,” Newman said. “I’m sure it will start off slowly as the U.S. government gives us permission, but then we can grow it over time.”

Since Obama started the program to support Cuba’s private sector, the U.S. government has approved the import of coffee and charcoal.

John Kavulich, is the president of the New York-based U.S.-Cuba Trade and Economic Council, which analyzes and predicts business trends between the nations. He said this is the right time for the Newmans to petition for the import.

The Biden administration, he said, is considering allowing Americans to invest in Cuba’s private sector. Currently, U.S. citizens can only donate to the businesses.

“This impacts the Newmans in a good way,” Kavulich said. “The Biden administration has interest in providing more support to Cuba’s private sector.”

Still, Kavulich said, the Cuban government must allow its private farms to sell tobacco to the Newmans.

And Cuba, he added, is “extremely protective of its tobacco.”

What’s more, the U.S. government allows citizens who had their Cuban land nationalized to sue companies that now profit from the property. The Newmans, Kavulich said, must be certain a Cuban partner’s farm does not fall into that category.

At its peak in the early 1900s, Tampa had more than 150 factories producing more than 500 million hand-rolled stogies, primarily using Cuban tobacco.

The Newmans originally saved that last bale of Cuban tobacco as a marketing ploy.

When other cigar factories ran out of Cuban tobacco, the Newmans still advertised they had some, even if none of it was being rolled.

“Authorizing the importation of raw tobacco grown in Cuba would allow us and other American cigar makers to support independent Cuban entrepreneurs,” Newman wrote in his petition to the State Department, “and to prove, once again, that we can roll better cigars with Cuban tobacco than Cuba can.”