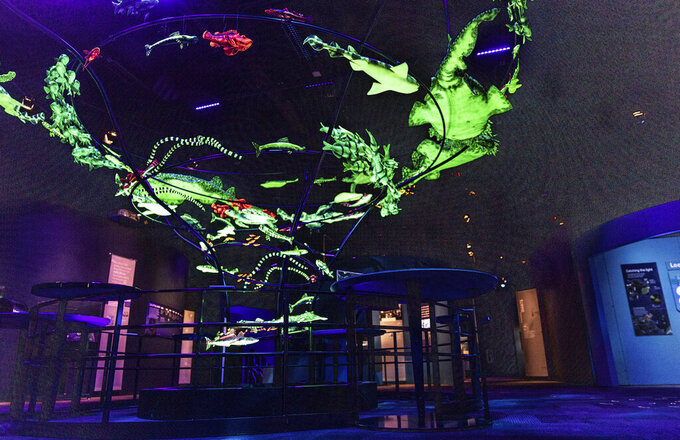 Khadejeh Nikouyeh, ASSOCIATED PRESS
The new "Unseen Oceans" exhibit at Discovery Place Science in Charlotte, N.C., on Thursday, May 26, 2022. The exhibit showcases a range of marine environments and the scientists who are developing new methods of exploring oceans. (Khadejeh Nikouyeh/The Charlotte Observer via AP)

CHARLOTTE, N.C. (AP) — You enter Discovery Place’s new grotto atop a gentle slosh of surf projected beneath your feet, so realistic and unexpected that you might fight the urge to prance in retreat to keep your toes dry.

But you’ve only reached the shallows of “Unseen Oceans,” a summerlong exhibition at the science museum that truly lives up to the description of “immersive experience.”

Illuminated in turquoise hues counterfeiting the uppermost layer of sea, its caverns beckon visitors to learn about the motor dynamics of Earth’s oceans, the clever life forms that occupy its regions and the perils that a sick sea could inflict on mankind.

Most of all, “Unseen Oceans” sketches the greatest mystery on Earth — what lies beneath the waves that cover 70% of our planet’s surface?

The exhibition at Discovery Place Science in uptown opened in May, and is organized by the American Museum of Natural History in New York.

“Oceans are so vast but the depths are unknown,” said Heather Norton, chief science officer for Discovery Place. A Florida native with scuba experience, she recognizes how most of us are far out of our depths when it comes to the seas.

We know the surface of Mars 100 times better than the Earth’s marine underworld — accurate maps exist for only about 15% of the seafloor, Norton said.

“Humans often struggle with things so big — we can’t understand them,” she said. “We sometimes dismiss them, assume that they’ll always be there and heal themselves.”

One not-to-miss feature of “Unseen Oceans” is an amphitheater in the shape of a research sub, including windshield and portholes.

Here visitors take a voyage of discovery, first descending past the flanks of an iceberg, then meeting various animals at their cruising depths, plankton to whales.

Steadily, and more darkly, visitors descend to about 7 miles down to enter the perilous realm where sunlight never penetrates, through vast canyons that hold otherworldly creatures immune to crushing pressures.

Live sea creatures ranging from moon jellyfish to seahorses to a zebra bullhead shark are on display, acquired for the exhibition and destined to live afterward in Discovery Place aquariums as part of the museum’s collection.

Other creatures on display are long dead, even extinct.

There is a fist-sized megalodon tooth, about 23 million years old, from the prehistoric shark the size of a bus that fed on whales and seals.

Sharks are one of the most successful designs nature ever hatched, ancient even in the era of the dinosaurs. But for the first time in their history, these apex predators are in danger because of overfishing by humans.

“Encounter With Giants” is a high-resolution film showing life-size sea-bigs like Earth’s largest mammal — the blue whale — sailing past at 100 feet in length, or a flock of manta rays, cruising serenely on winglike flippers.

Other curious incredibles — flashing tentacles, snouts or unblinking eyeballs — are drawn to the camera for startling close-ups. A subtext of the exhibition is humanity’s ingenuity in exploring the hostile environment of the oceans, Norton said.

Exhibits show how sonar and satellites sketch the undersea terrain and how submersibles take us into the inky depths.

Two virtual-reality stations allow young explorers to drive a mini-submarine to collect reef samples (just keep an eye on your fuel and air gauges) and return to base.

“As humans we depend on the oceans for all that we do, from the oxygen we breathe to the food we eat,” Catherine Wilson Horne, Discovery Place’s president, said in a statement. “Yet there’s still so little we know about life underseas.”

Increasing acidity, melting glaciers and warming seas are some of the problems that concern oceanic scientists. These not only threaten marine ecosystems but imperil our food supply and climate.

Exhibits show how the United States and Canada allowed the northeast cod fishery to collapse. In contrast, Norway and Russia set strict limits on the cod harvest to 700,000 tons annually off Europe, which ensured a sustainable supply for the future.

Another exhibit shows how reef management and new fishing techniques have mitigated damage to the seabed and its denizens, offering hope we can live more in harmony with our otherworldly companions on this blue planet.