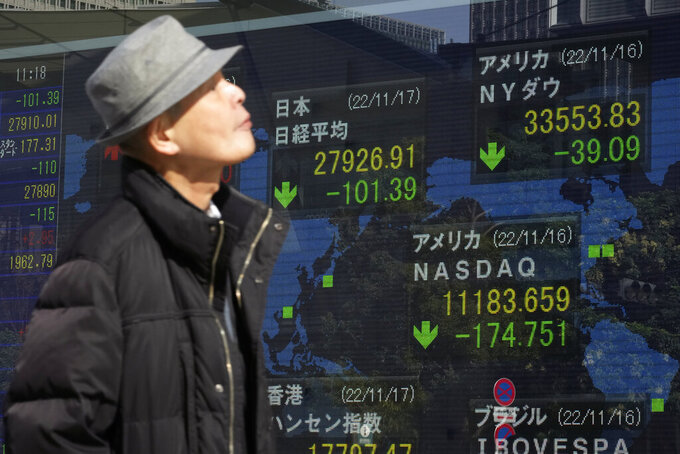 Market watchers noted worries about how the Federal Reserve might not ease on its aggressive interest rate hikes, which are aimed at curbing inflation pressures. Much of the market’s prior rally on Wall Street was due to such hopes, including easing inflation.

U.S. retail data has shown improvement, while industrial production has dropped, highlighting the resilience of the service sector, as opposed to weakening external demand.

The Fed has been raising interest rates in an effort to slow the economy and tame the hottest inflation in decades. Wall Street has been worried it could hit the brakes too hard and bring on a recession.

China is maintaining its “zero-COVID” approach of mass testing many people alongside localized lockdowns and quarantines to eliminate the coronavirus entirely. Such restrictions have caused a supply crunch for some of Asia's biggest manufacturers, denting economic growth.

Elsewhere, the lifting of pandemic restrictions have fueled hopes of greater consumer spending and tourism revenue.

On Wall Street, retailers and technology companies led a broad slide. The S&P 500 fell 0.8%, wiping out most of its gains from a day earlier. The Dow Jones Industrial Average fell 0.1% and the Nasdaq lost 1.5%.

Discouraging quarterly updates from Target and other retailers put investors in a selling mood, despite a report showing that U.S. retail sales remained strong last month.

Target slumped 13.1% after cutting its forecasts for the holiday season following a surprisingly big drop in its third-quarter profits. The retailer also said its sales slowed sharply in recent weeks.

“I think the market might be saying the broader data that we have is OK, but what Target is saying is a little more forward-looking in terms of what they expect for the holiday season, and that might not be so good,” said Willie Delwiche, investment strategist at All Star Charts.

The latest government report on retail sales for October shows that consumer spending remains strong, though it's unclear whether that's because of more purchases or higher prices.

Strong consumer spending is typically a good sign for the economy, but it could make the Fed's strategy of cooling the economy more difficult.

“The better-than-expected retail sales results don't bolster the case that the Fed" can ease up on its campaign to slow the economy with high interest rates, said Tom Hainlin, national investment strategist at U.S. Bank Wealth Management.

He said resilient consumer spending could improve the possibility that the Fed manages to pull off a so-called “soft landing” with its strategy. That would involve taming inflation without throwing the economy into a recession, or at least avoiding a damaging recession.

Also hanging over market sentiments, especially the energy sector, is the war in Ukraine. Any worsening could cause spikes in prices for oil, gas and other commodities that the region produces.