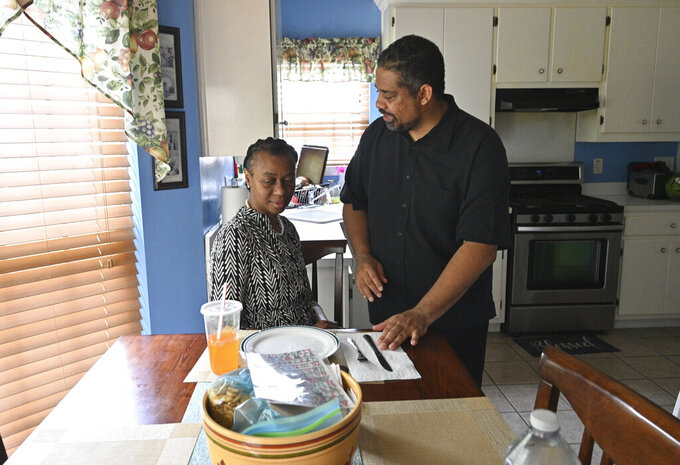 HYOSUB SHIN / AJC, ASSOCIATED PRESS
Robert Reid prepares snacks for his wife Kim Reid, who was diagnosed with early-onset Alzheimer's, at their home in Hampton on Thursday, June 10, 2021. (Hyosub Shin/Atlanta Journal-Constitution via AP)

More time to get to know her grandchildren and for them to know their “Iya.”

More time to share many Christmases with her family.

In March 2016, Caston, who lives in Macon, was diagnosed at 51 with early-onset Alzheimer’s disease, which slowly diminishes a person’s memory and cognitive abilities.

Today she and other patients cling to hope that a drug intended to slow effects of the disease will help.

The U.S. Food and Drug Administration recently granted accelerated approval for the use of aducanumab, sold under the brand name Aduhelm and developed by Biogen and a Japanese company, for the treatment of Alzheimer’s, a progressive disease that affects 6.2 million people in the nation.

Aduhelm, which would be administered to the earliest-stage patients through infusion once a month, is designed to slow the progression of the disease.

It’s the first Alzheimer’s drug treatment approved by the federal agency in nearly two decades, although its journey to approval was controversial and remains so.

The FDA’s accelerated approval has given some patients and their families hope. Others, though, doubt the drug’s effectiveness and safety.

“If it will give me an hour, a day, five days or a year, then you’re going to say, ‘Yes, give it to me,’” said Caston, a retired insurance underwriter who is also a member of the board of the Chicago-based Alzheimer’s Association.

She was among several people who shared their stories about living with the debilitating disease during a Zoom call earlier this year with FDA officials and others.

She told them about her grandchildren, two who weren’t born when she was diagnosed and a third who will be born this year. Her daughters and their spouses told her they moved up plans to have children so she would be able to know them and they, her.

“I’m very excited‚” said Linda Davidson, executive director of the Alzheimer’s Association, Georgia Chapter. “This is the first drug treatment that provides a new future for us and a chance to slow the progression of disease. We know it’s not a cure. It’s treatment and we know it’s only used for people with mild cognitive impairment due to Alzheimer’s.”

About 150,000 in Georgia have been diagnosed with the disease, according to the association. By 2025, that number is expected to increase 26.7% to 190,000 people. Georgia is in the top 10 states for increase in prevalence, largely due to the aging population. Between 2000 and 2030, Georgia’s population of people age 65 and older will increase by 143%, according to the state’s Division of Aging Services.

The drug’s journey to FDA approval has been filled with controversy, including concerns raised about its efficacy, its side effects, its high cost and the relationship between Biogen, the drug’s maker, and the federal agency. Locally, there are also questions about how many infusion centers will be in Georgia and whether they will be in rural areas as well as the bigger cities.

Just this week, Dr. David Knopman, a Mayo Clinic neurologist, told CNN he had resigned from the Peripheral and Central Nervous System Drugs Advisory Committee in protest of the FDA’s decision.

“It’s a very consequential decision but whether it’s a game changer I think we have yet to see see whether the product is safe and effective and that’s the basis for so much controversy around its approval,” said Dr Caleb Alexander, a professor at Johns Hopkins University’s Bloomberg School of Public Health. “It’s quite unclear whether or not lower beta amyloids translates into improvement in critical symptoms of Alzheimer’s disease.”He’s concerned about side effects and pricing, which he said will “break the bank” for health insurers and patients alike.

The drug is expensive and there are questions about whether Medicare and Medicaid or private insurers will pay and how much. Biogen said the drug would cost about $56,000 for a typical year’s worth of treatment, and it said the price would not be raised for four years.

Lisa M. Renzi-Hammond, an associate professor at the University of Georgia and co-director of the Cognitive Aging Research and Education Center, called aducanumab “one more tool in the toolkit.”

Still, she is cautious. Renzi-Hammond advises patients to talk with their doctors to see if they are good candidates for the drug. It targets the amyloid plaque.

“We’re still learning about the variations of Alzheimer’s and dementia,” she said. “Some people take a drug and it works miraculously; some people take a drug and they notice absolutely no difference whatsoever. I don’t see where this drug is any different, but (for those who see benefits), it can provide incredible relief. We’re going to learn more about the drug when it is more widely used.”

Public Citizen last year called for an investigation of the collaboration between the FDA and Biogen.

“The FDA’s decision shows a stunning disregard for science and eviscerates the agency’s standards for approving new drugs,” according to a statement by Dr. Michael Carome, director of Public Citizen’s Health Research Group, on the watchdog’s website. “Because of this reckless action, the agency’s credibility has been irreparably damaged.”

He added that approval was based on “seriously flawed analyses of two identical phase 3 trials that were stopped at the halfway point because a preliminary review of the data found that the trials, if continued to completion, were unlikely to show the drug benefitted Alzheimer’s patients. One trial showed no benefit, and the other only suggested possible minimal benefit at a high dose.”

Dr. Allan Levey, chairman of Emory University’s Department of Neurology and director of the Alzheimer’s Disease Research Center, said he “wouldn’t call the drug itself a game changer, but I think the moment is the beginning of a game-changing moment. I think this is a really, really pivotal step forward.”

He and others emphasized that patients and their families should not expect a cure, which it is not, and that it won’t work for those further along in their diagnosis.

“I know our patients and their families are desperate. What I don’t want is them to have false expectations,” he said.

He said the FDA will let doctors prescribe the drug, with additional study to be done. If it turns out the additional studies do not show clinical benefit, the FDA could withdraw approval.

Dr. Jonathan L. Liss, director of the Columbus Memory Center, said he is someone who has “waited 30 years for this moment in the field.”

He tells patients that the treatment could extend their independence, if they qualify, and already has about 20 patients “lined up to get the drug”; others are “past the point that they would qualify.”

That, though, does not lessen the hopes that some families have pinned on Aduhelm.

Kim Reid, then a freight manager for a logistics company, noticed she was having problems tracking and managing the various shipments. Her primary care physician said it was menopause or just a matter of “getting older.” He finally pulled the doctor aside and asked for more tests.

Several specialists later, the Hampton residents received the diagnosis. Robert Reid retired from an engineering company to help care for his wife. “It’s very difficult day to day just making sure she doesn’t wander or prompting her to exercise and do things for herself,” he said. “It’s a 24/7 job.”

He’s researched the new drug and “the hurdles here and there, but anything that will potentially make a better quality of life will be a benefit for the family as a whole.”

He plans to bring up the possibility of her getting the infusions at her next appointment. He knows the progression of the disease is not the same for everyone and there are also other tests that must be performed before a patient is deemed a good candidate.

“There are still a lot of questions,” he said.

The drug won’t help everyone.

It was a long shot, she knew.

Her father, Duvall Watson Sr., 65, has late-stage Alzheimer’s and is now in hospice care.

His disease had advanced too far. He no longer communicates or responds to stimuli like jazz music or the sounds of his favorite group, Earth, Wind & Fire. He just stares downward.

“It’s a very hard disease,” she said. “It’s gone through our family emotionally and financially.”

And while the drug may not help her dad, “I’m hoping it will be helpful for another family. My prayer is that they finally find a drug that cures Alzheimer’s and that people don’t go through the same things we did.”

“Eventually, in the future, we’re not going to worry about how many people are dying each year and each day from Alzheimer’s,” she said.

“I’m so blessed to know that I’ve gone on five years (since diagnosis) and I’m still very cognitive,” she said. “If somebody gives me the chance to prolong that, I have nothing to lose. I wonder every day when I wake up is today going to be the last day that I can talk to people and show people who I am?”